BLUE AREA OF THE MOON 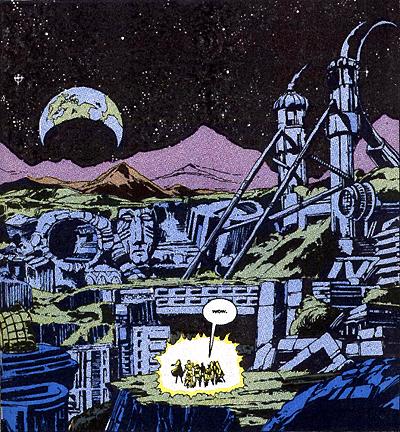 Description
On Earth’s moon there is a big deep crater that is called the Blue Area. It is filled with the ruins of blue buildings left behind by former inhabitants of the place. Within the crater and a few miles above is an artificial, breathable atmosphere. Near the place is the Watcher’s citadel.

Origin
While researching the heritage of their teammate Mantis, the Avengers learned who built the ancient city. Many centuries ago, two races were living on the planet Hala - the Kree and the Cotati. They couldn’t have been more different, the Kree were Hunters and meat-eaters, the Cotati were evolved plants with telepathic-empathic abilities. One day the Skrulls landed on the planet, back then they were a very friendly race that attempted to share their knowledge with other people, in exchange for their loyalty to the Skrull Empire.

Finding two equally evolved species, the Skrulls decided to hold a contest, the winning race would become the official representors of Hala. Of each group seventeen people were selected and both teams were transported to an uninhabited planetoid, where they should build, develop and grow. After one year the progress of both parties would be judged. The Kree team was taken to Earth’s moon, where they immediately began to mine and refine, and they built a gargantuan blue city. The Skrulls were very impressed, but the progress of the Cotati was even more astounding. The plant race had accomplished to turn a barren planetoid into a fully grown forest and garden by telepathically calling out to ancient seeds and water. 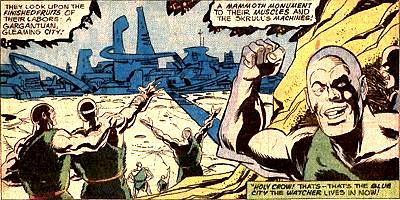 The Kree could not stand to loose the competition, and at night they killed almost all Cotati and the Skrull crew of the visiting spaceship. Examining their craft the Kree too learned the secrets of interstellar travel. This was the start of the century-old enmity between the Kree and the Skrulls.

Blue Area related plots
The ancient blue city was built by a group of Kree, who after one year they were brought back to their homeworld Hala, leaving the place abandoned. Over time the buildings were damaged by meteors or crumble in lunar earthquakes. Only ruins remained. [Avengers (1st series) #133]

At an unknown point in time, the Watcher chose the moon as the perfect place to observe humanity, and set up his palace near the abandoned city. Exploring the moon for the, the Fantastic Four stumbled upon the Watcher’s residence and met him for the first time. Being discovered the powerful alien thought about relocating his base, but apparently never did so. [Fantastic Four (1st series) #12] 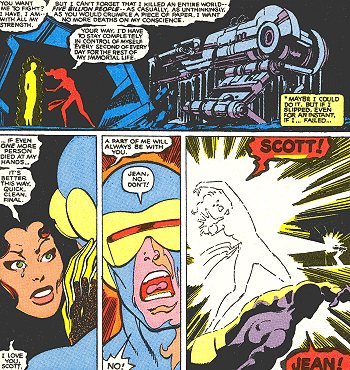 The Blue area was chosen as battleground for a duel between the X-Men and an equal amount of Imperial Guardsmen of the Shi’Ar. The outcome was to decide the final fate of Phoenix, who as Dark Phoenix became a danger to the universe itself. However during the battle Phoenix felt her imminent transformation into the chaosbringer, and committed suicide by atomizing herself with one of the weapons left behind in the ruins. The fight was to be observed by a Kree Bel-Dann and Raksor, a Skrull representor, but they got into an argument and started to fight each other. They did not even realize that the battle they came to observe had ended and were forgotten about. [Uncanny X-Men #137]

When the Inhumans were dying of the pollution in Earth’s atmosphere Mr. Fantastic had the idea to relocate their city to the clean atmosphere in the Blue Area. The whole city of Attilan was lifted by antigravity emitters and was placed within the crater, burying many of the elder city’s ruins below the Inhumans‘ Great Refuge. On the same day the daughter of Crystal and Quicksilver was born. For apparent reasons she was named Luna. [Fantastic Four (1st series) #240] 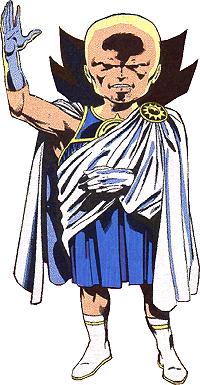 After months of fighting the Watcher called Bel-Dann and Raksor into his citadel. He had a message for them from the Skrull Empress and the Supreme Intelligence of the Kree. Not wanting to start another race wide war, they had agreed on a fair battle of one against one. The fate of both empires would be decided after the outcome of the battle between Bel-Dann and Raksor. With that enormous responsibility on their shoulders the combatants restarted their fight, and even crashed the wedding of Medusa and Black Bolt. After Mr. Fantastic learned the meaning of the fight from the Watcher, he came up with a plan. The Inhumans and Fantastic Four cornered the Kree and the Skrull, till they had no choice but to pool their resources. Together they fought and defeated the Earthers one by one (who of course were only faking defeat). They then returned to their empires with the message that only together they were able to survive. The truce between the alien Empires did not last for long though, as soon afterwards the Skrull homeworld was devoured by Galactus. [Fantastic Four Annual #18]

Much later, Apocalypse seized control of the lunar base from the Inhumans and proceeded in turning them into his slaves. A small group of them became his "Riders of the Storm" (later called Dark Riders) who were sent to take control of X-Factor's Ship. During a fight between them and X-Factor, the sentient Ship decided the only way to stop Apocalypse was to destroy itself. It launched into space and blew up, while X-Factor were teleported to safety by the remaining Inhumans. Black Bolt informed X-Factor that Apocalypse was holding Cyclops' son as well as the rest of the Inhumans at the lunar base. Beast reported that he was able to download the core elements of the Ship's personality and they mounted an assault against Apocalypse. The ship created some holographic projections of an army of Inhumans to attack the front of the base and distract the enemy, whilst Black Bolt, Cyclops and a few others blasted open the slave pens. Once inside, X-Factor went looking for Cyclops' son Christopher Nathan. X-Factor found Apocalypse, who had linked himself and Nathan with the base. They were able to free Nathan with the help of Askani, however he had been infected with a techno-organic virus and the traveler from the future took the baby with her to save it. Cyclops defeated Apocalypse by unleashing a powerful optic blast, seemingly destroying him. Attilan and the Blue area were again under the Inhumans' control. [X-Factor #67-68]

Several months later, Attilan was stolen. The whole city was shrinked down and placed in a bottle, till it was relocated on Earth on the raised island of Atlantis. To keep out the polluted air the city was covered by a protective dome. [Atlantis Rising Crossover]

Sooner than anticipated, the Supreme Intelligence found a means to reach its goal when the Forever Crystal came into its possession. It used the crystal to evolve the surviving Kree subjects into a new race of shapeshifters called the Ruul. With them trying to re-conquer the Kree Empire, the moon’s Blue Area was once more left uninhabited. [Avengers Forever #12, Maximum Security crossover]

In the meantime, Attilan had once more been abducted, this time into space, with the Inhumans about to be enslaved. The Royal Family managed to defeat their oppressors, but when they wanted to return the city to Earth, the general population of the Inhumans refused and rejected their leaders, wanting to remain in space. Banished by their own people, the Royal family traveled to Earth, asking for asylum, but here too they were considered outcasts-. Their only option was to move back to the Blue Area. [Fantastic Four (3rd series) #54]

It is still unknown under what circumstances, the rest of the Inhumans apparently returned and once more accept the Royal family as Attilan is once more located in the Blue Area as off recently. [Inhumans (4th series) #1]