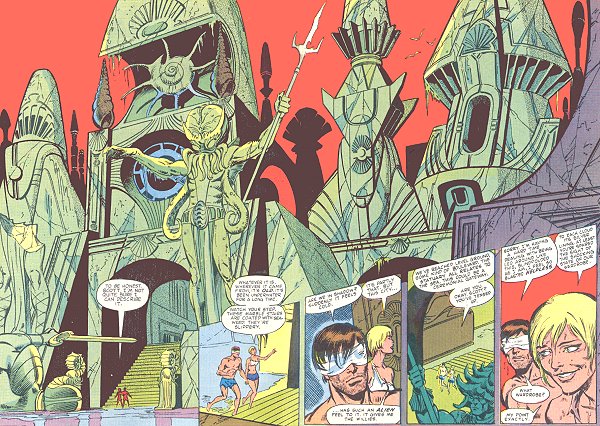 Description / Origin
The strange island hidden deep within the Bermuda Triangle always was a mystery. Raised from the ocean ground by Magneto to be used as his base of operations, it became a temporary refuge for the X-Men, but for the most time it was uninhabited. The purposes of most of the tall buildings are unknown, though there are several temples and occult locations among them. The ornamentals and statues all relate to sea-life somehow, a theme that is apparently picked up in the clothing of its original population, some of which was preserved in some chests and store rooms. 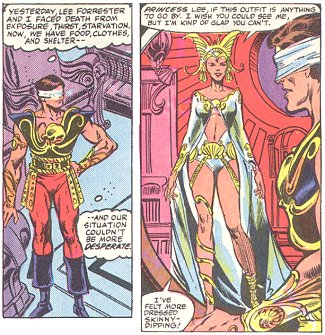 The people wearing them seem to have been humanoid in appearance, but otherwise little is known about them. Some of the statues though make it look like as if these humans/humanoids were the slaves of rather grotesque looking creatures. The city is quite old and might by of Lemurian origin, though it could equally originate from another dimension or possibly have been an alien outpost on Earth.

Also unknown is how Magneto came to know about the city, though a possible answer can be found in his defeat at the hands of the combined might of the X-Men and Avengers, when he fell into the Atlantic and apparently drowned. [Avengers (1st series) #53] When showing up next, in the Savage Land, Magneto explained that he had found a system of caves and caverns beneath the ocean ground leading all the way to the Savage Land in Antarctica. [Uncanny X-Men #63] While exploring these caves he might have come across the empty city beneath the waves.

When creating the island, writer Chris Claremont seems to have been inspired by the work of H.P.Lovecraft, as several elements seem very similar.

Bermuda Island related plots
After being washed overboard during a storm, Scott Summers and Lee Forrester found themselves stranded on a remote island in the Bermuda triangle. When they woke up the next morning, they were surprised to see a strange looking city on a second island roughly a mile off shore, though it wasn’t there the day before. Hoping to find some food or shelter they swam the short distance and explored the rather alien looking city until they ran into someone who claimed the deserted island for himself – Magneto. Wearing a bandage over his eyes, as he had lost his visor, Scott hoped he could hide his identity, but Magneto not only recognized him, but also told him he could take off the blindfold, since a special device on the island neutralized all super powers save his own. [Uncanny X-Men #147-149]

From his hideout, Magneto threatened the entire world with a new device capable of manipulating Earth’s crust, with which he had also raised the island. Despite the power negating field, Magneto erected a second one stopping any form of technology, thus preventing being hit by missiles and other long-range weapons. The X-Men’s Blackbird, returning from a mission, was caught in that field too, and crashed down, though without Magneto noticing it. Making their way to the nearest location, the team found themselves reunited with Scott. Though all robbed of their powers, the X-Men used other skills to fight Magneto. In the end it was Kitty who destroyed his computer systems, which led the Master of Magnetism to hurt her in a fit of rage – almost killing her. It was this deed, that turned Magneto from the path of would-be-conqueror. Faced with the fact that he had almost killed a child of his own species, he realized that what he was doing was no better than what the Nazis had done to his people and he fled from the scene. [Uncanny X-Men #150]

With their mansion’s security having been breached several times, the X-Men temporarily made the strange island their new headquarters. Not a moment to soon, as the mansion was almost completely destroyed by an attack of the alien Sidri. [Uncanny X-Men #154] With one crisis chasing the other, the team never had the chance to properly inspect their new surroundings and the many secrets off the strange city, a mistake that soon had dire consequences. While the X-Men were having a training exercise, Colossus‘ little sister was lured away into a special temple by the evil sorcerer Belasco. The team followed her inside, though the dark hall seemed empty save for randomly appearing circles of light. These “stepping disks“ functioned as portals to another dimension called Limbo, to where they were all teleported. The X-Men were severely overpowered by Belasco but eventually managed to return back home with Illyana, only as time moved much faster in Limbo, she no longer was a six year old girl, but a teenager with mutant powers of her own. [Uncanny X-Men #160]

Shortly afterwards the X-Men were abducted into space by the alien Brood and when they returned they moved back to the mansion in Westchester which had been repaired during the time they had been missing.

After saving Magneto from nearly drowning and being eaten by a shark, Lee Forrester took him to his old base to recover. She revealed that she had been coming there several times since the X-Men left it, and that she had been studying the buildings and artifacts hoping to find some clues on the city’s original inhabitants. Just like Magneto she had come to the conclusion that they weren’t ordinary people, if they had been humans at all. [Uncanny X-Men #188, New Mutants (1st series) #23-24]

Living with Magneto for the next days if not weeks, Lee found herself slowly attracted to him, and the master of magnetism returned that affection. Despite several setbacks, they seemed to be headed towards a relationship and thanks to Lee Magneto began to change his view on humanity. Just when he was back to health, Magneto picked up a telepathic distress call from Xavier, alerting him to the Beyonder’s presence on Earth and asking to help oppose him. [New Mutants (1st series) #26, 28-29] Magneto immediately responded, leaving the island, and soon after he even became the Xavier‘s replacement as headmaster of his school.

Soon after, Magneto, Lee and the X-Men went to the island for a short holiday trip, but Kitty felt uncomfortable with the tentacled statues all around them. Ororo agreed with her, sensing something evil having taken place in the citadel that possibly could never be exorcised no matter how much time would pass. Examining the sttatues, Kitty comes to the conclusion that the Island’s people must have been scientifically advanced, as they were not made of stone, but machines made of crystalline energy. Actually the statues wered defensive mechanism as the X-Men soon learned when they came to life, awakened by the mystirious Examiner. The statues turned all of the X-Men to stone by touching them, and only after Magneto let the Examier duplicate his powers, the X-Men were released. Both parties left. [Marvel Fanfare (1st series) #33] 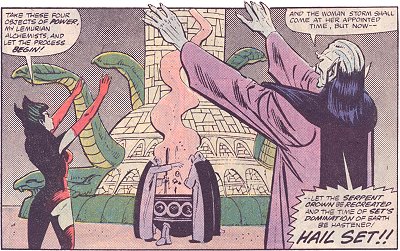 For a long time, the place was abandoned, though during Atlantis Attacks the Deviant High Priest Ghaur and Lemurian rebel Llyra chose a location on the Island to re-create the Serpent Crown with the help of several magical artifacts. Once their creation was finished, it being much bigger and more powerful than the original crown, they took it to another hideout beneath the sea where they later were opposed and defeated by the assembled might of the Avengers, X-Factor and the Fantastic Four. [Uncanny X-Men Annual #13, Amazing Spiderman Annual #23, Avengers Annual #18]

After several occasions of sailors disappearing in the Bermuda Triangle, Lee Forrester asked the X-Men for help. Wolverine, Psylocke and Beast checked out the one temple linked to 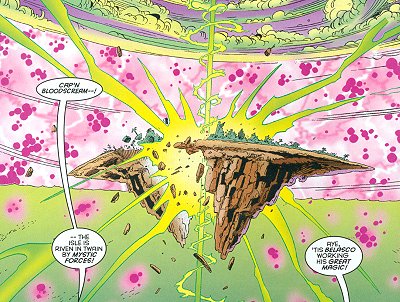 Belasco and indeed it was the sorcerer’s doing. He was about to enter the N’Garai dimension with a special crystal, wanting to enslave the demons and turn them into his army for conquering Earth. When he chanted the spell that opened the gateway, the island crumbled beneath the mystic energies involved and fell apart. In the last instant though, Belasco was stopped and he and the island’s remains ended up being sucked into the N’Garai dimension without the crystal. [X-Men Unlimited #9]