The Final Decree of Wanda Maximoff

Meanwhile, Cyclops leads his forces to the S.H.I.E.L.D. Helicarrier. With Shaw away, Emma uses her powers to let the heroes on board without being detected. She then mentally controls Captain Greycrow to take the ship to Genosha. While on the way, 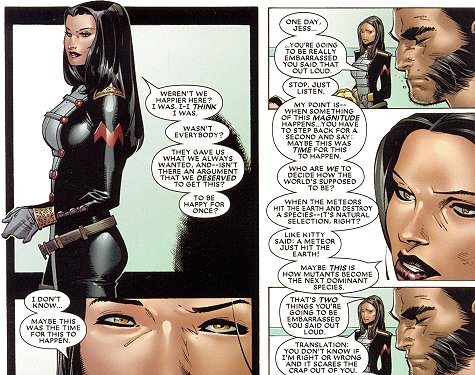 the heroes relax and discuss what happened. However, there doesn’t seem to be a group consensus on what to do. Some wonder if they can put the world back, others wonder what they will do if they fail. Still, some think that perhaps restoring the world is just as bad as Wanda’s initial change; while others think that perhaps they should just leave things be. In the end, Cyclops takes charge and makes a plan to take down Magneto and find Xavier. Dr. Strange will find and talk to Wanda, while Cloak will take Emma and Layla to find Xavier. The rest of them will distract the House of M.

As evening falls in Genosha, the guests for the House of M gala arrive, including the Black Panther, Queen Ororo, Genis-Vell, Namor and Doom. As the royal family is introduced, a giant Sentinel 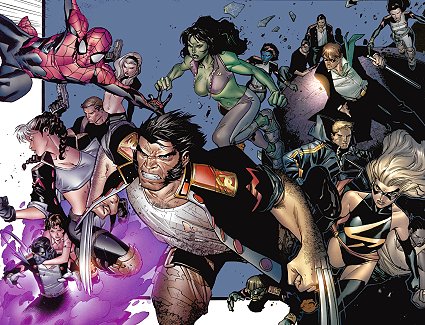 heads towards the throne on a collision course, but is stopped by Magneto and Polaris. The heroes debark from the Sentinel and a battle begins with the Royal Guard. Cyclops attacks Magneto, blasting him far from the gala plaza. In the Memorial Garden, Emma, Layla and Cloak discover a memorial for the dead Xavier. Emma is overcome by this revelation, but Cloak investigates and discovers that there is no body; Xavier isn’t there.

Quicksilver comes to the aid of the unconscious Wanda, but she literally crumbles into nothingness in his arms. Confused and angry, Pietro blames the heroes for this and attacks them. As the battle rages, Dr. Strange locates the real Wanda in a nearby tower. Wanda, who is oblivious to the battle outside, plays with her children. The two begin to talk, 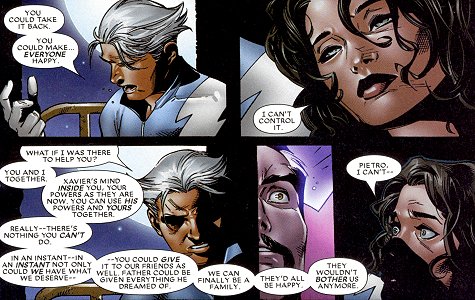 but it is clear that Wanda is still not entirely well. Strange suggests that she created Layla Miller to bring the heroes to her, but Wanda has no clue who Layla is. Strange begins to question Wanda on what Magneto has done, but Wanda uses her powers to show Strange a vision of the past shortly before the heroes came to Genosha to see Wanda, and Strange realizes that it wasn’t Magneto who coerced Wanda into reshaping reality, it was her brother, Quicksilver. However, before Strange can figure out where Xavier is, Hawkeye interrupts and tries to kill Wanda. Clint talks about his love for her and their past but, when he is about to kill her, Wanda accidentally lashes out and erases him from reality. Wanda then begins to break down, as she loses grip of her powers again.

Outside, Magneto emerges in the Memorial Garden, where Layla wakes him up. Realizing the truth, Magneto returns back to the plaza and attacks Quicksilver in a fury. 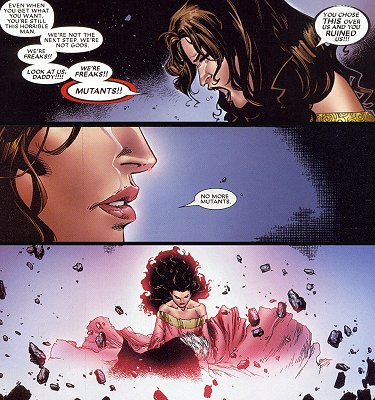 He beats his son to death out of anger for doing what he did to the world in his name. Sensing her brother’s pain, Wanda destroys her tower and restrains Magneto, then healing Quicksilver. The heroes begin to organize and figure out what to do next, but Wanda is not through. She tells her father that Pietro gave him what he always wanted, and yet he is still a horrible man. He ruined her and Pietro years ago when he chose mutant supremacy over his own children. Wanda declares that mutants are not the next step in evolution; they are just freaks who ruin everything. Before anyone can do anything, Wanda utters three fateful words: no more mutants. Reality then burns away in a flash of white light again. [House of M #6-7]

Emma Frost wakes up on the grounds of the Xavier Institute and immediately senses trouble. Rushing into the school, she discovers most of the 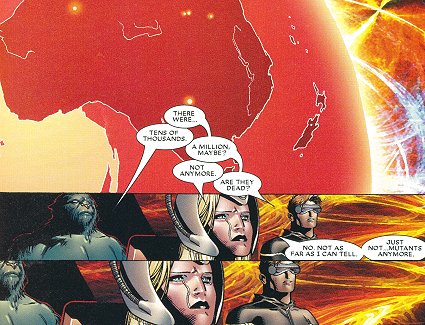 student population is de-powered and no longer mutants. Strangely, no one else seems to remember the House of M aside from herself, Cyclops, Shadowcat and Wolverine, who has also retained all his memories and now remembers his whole life. Leaving Nightcrawler and Shadowcat to deal with the distraught students, Emma rushes to Cerebra and discovers that the entire mutant population throughout the world has been reduced drastically. Where there were once millions, there are now barely enough to sustain a viable species. To make things worse, Emma cannot locate Wanda or Xavier.

The Avengers also convene but, just like the X-Men, some remember the House of M while others do not. The team watches the news coverage on the mutant de-powering crisis, but their attention is then called to Avengers Mansion. They arrive there and find Hawkeye’s uniform pinned up on the wall with a newspaper article about his death, Clint’s signal to the Avengers that he lives once again. 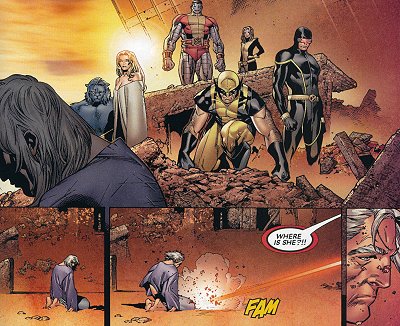 The X-Men head to Genosha and find a de-powered Magneto. They confront him about the House of M and the location of Xavier and his children. However, Magneto knows nothing. Wolverine threatens to kill Magnus, but Shadowcat reminds her teammates that Magneto wasn’t responsible for this mess. The X-Men leave Magneto alone on Genosha, to live out the rest of his miserable, human life. [House of M #8]