The mysterious history of Stryfe and Cable is explained. One of them is the son of Cyclops, sent to the future only to return as an adult, the other is his clone. Stryfe believes to be the real one, and wants revenge on all those he holds responsible for his miserable life. Posing as Cable, he assassinates Xavier, the heart of the X-teams, during a public speech. Also blaming Sinister and Apocalypse he makes the X-Men believe that these two are involved and watches in great joy as his many opponents battle each other, while he tortures Jean and Scott in his lunar base.

Xavier makes a speech about tolerance during a Lila Cheney's One World Harmony Concert. Some of the X-Men are in the crowd, but it’s impossible to keep tight security, and suddenly the professor is shot by Stryfe, who is posing as Cable. At the same time in Westchester, the Horsemen of Apocalypse attack Scott and Jean, and Iceman and Colossus can’t prevent them from being captured and teleported away. The Horsemen deliver their captives to someone they think is Apocalypse, but it turns out to be Sinister in disguise. He trades in the couple for a canister carrying genetic material. 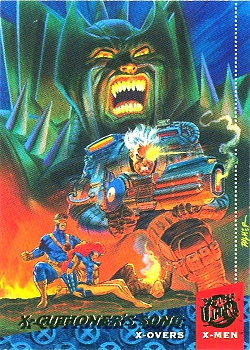 Xavier is brought to the hospital. There the X-Men meet X-Factor, and Guido and Rahne are sent to the scene of the assassination to search for clues. Upon arrival they find X-Force instead, who are also investigating, as they saw the event on the news and wonder why their absent mentor Cable would perform such an assassination. Together the X-Men's Blue team and X-Factor hunt down X-Force and bring them in for questioning regarding Cable. The Gold Squad tries to find Jean and Scott and hunt down the Horsemen and Apocalypse.

In Egypt the Dark Riders awaken Apocalypse, despite his regeneration cycle not being complete to tell him the X-Men were attacked by the Horsemen in his name. Inspecting the Horsemen’s headquarters he finds them defeated by the Gold X-Men. A fight starts and Apocalypse barely gains the upper hand. He leaves to find out who set him up.

It‘s discovered that Xavier was shot with a bullet carrying a techno-organic virus. The Beast and Moira MacTaggert try their best but are unable to stop the virus from spreading. Sinister shows up at the mansion and hints that the X-Men are hunting the wrong foes, Stryfe is the one who orchestraed the events.

Upon returning from one of his timetravels, Cable learns of the recent events. He suspects that the assassination is Stryfe’s doing as he recently learned that they look the same. He infiltrates Department H to get their data on Stryfe and runs into Wolverine who had the same idea. Before a fight starts, Cable convinces Bishop and Wolverine that he might not be responsible for the assassination, and they team up. Aboard Graymalkin, Cable reveals that both he and Stryfe are from the future, and have been opposing each other their whole lives.

The captive Jean and Scott are brought before Stryfe. He toys around with them and accuses them of having been bad parents. Somewhat later they manage to escape from their cells and try to escape from Styfe’s base only to find themselves on the lunar surface. They pass out from lack of oxygen and are recaptured. 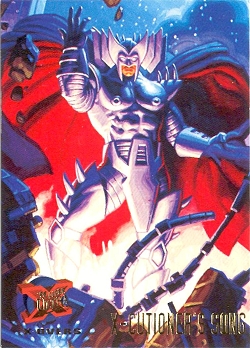 At the mansion the other X-Men and X-Factor gather data on Stryfe. It’s not much; they only know of his connection to the MLF and that he may be Cable in disguise. They let Cannonball help bring Stryfe in, in exchange for X-Force’s information on the MLF. The united X-teams discover the MLF base in Arkansas and defeat the entire MLF, but have casualties among their own. Stryfe and Zero are not to be found.

Apocalypse breaks into Cable‘s safehouse and finds futuristic technology derived from his own. He begins to understand that Cable and/or Stryfe is/are the infant son of Cyclops. Back in Egypt, his Dark Riders soon get attacked and defeated by Stryfe, who then takes on Apocalypse himself. Still weakened from the incomplete restoration cycle, Apocalypse loses the battle in front of the Dark Riders, who now swear allegiance to Stryfe. Apocalypse barely escapes and approaches the X-Men for help.

Beast and Moira are able to remove the techno-organic bullet from Xavier’s head. Even though the delicate operation was successful the virus continues to spread in the telepath‘s body. Psylocke even thinks about putting the Professor out of his misery, but Apocalypse says he can cure Xavier. Having no other option the X-Men agree and Apocalypse speeds up the virus to the point that it can no longer replicate properly and burns out.

Wolverine receives a subconscious telepathic call from Jean, making him carve an image of the moon with his claws. They figure out that Stryfe must be hiding at Apocalpyse’s base on the lunar surface. Cable, Bishop and Wolverine teleport there from Graymalkin, but are welcomed by the Dark Riders and an army of grunts. The rest of the X-teams follow along with Apocalypse in one of his ships. Quickly they dispose of the foot soldiers and start to search for Stryfe, who has escaped with Jean and Scott. Apocalypse wanders off and has to face the Dark Riders, who try to kill him as they consider their former master no longer fit enough to survive. Archangel later finds him near death, and decides not to kill Apocalypse like he originally intended.

The heroes find Stryfe with Scott and Jean at a strange tower, protected by a forcefield that only lets Summers DNA pass through. Cable and Havok enter and fight Stryfe. The battle allows Jean and Scott to break free and they try to reach out to Stryfe, but he doesn’t trust them and plans to destroy them all. Cable knows that he has to be destroyed, so he asks Cyclops to operate his equipment, while he does what he has to do. A self-destruct sequence is started and both combatants, Cable and Stryfe, disappear into the timestream. Cyclops is upset that he had to sacrifice his son a second time.

Mr. Sinister’s assistant Gordon opens the canister Stryfe handed to him, but it appears to be empty.

Apocalypse and the Horsemen :