Cyclops dated Colleen Wing, but never really responded to her advances. Was there some secret reason readers didn't know about?

In X-Men #114 to 125 from 1978 and 1979, Scott Summers (Cyclops) thought that his girlfriend Jean Grey (Phoenix) was dead. There was a controversial scene in X-Men #114 where Scott told Storm that he felt no sorrow for the loss of Jean because she was no longer the girl he had loved after becoming Phoenix in X-Men #101, 1976. (Years later, in 1986, Phoenix was retroactively changed to not have been Jean Grey at all, making Scott more right than anyone knew at the time.)

"The intention was always there that Scott should feel nothing on Jean's death," writer Chris Claremont told The Comics Journal #50. "I mean, the reason being that Scott is a person who has been so hurt in his life that at that point he couldn't afford to be hurt anymore."

"But many people saw it as my abandonment of the character rather than my establishing something that will be resolved that I was setting something up. Rather than make this major shift in his character, I wanted to build it; I wanted to broaden his horizons a little. That's why I brought in Colleeen Wing (in X-Men #118, 1979), to give him an alternative."

"Someone like Scott would internalize the grief, would shut it away, would ignore it, and by ignoring it would ignore his own feelings toward Jean," Claremont added in The X-Men Companion. "What I wanted to do with the Colleen Wing relationship was to show him growing up, show him getting in touch with his emotions, his feelings, his needs, his fears, his loves, his hates, his griefs, his joys, so that when he finally found Jean again they could experience their love in the fullest measure." 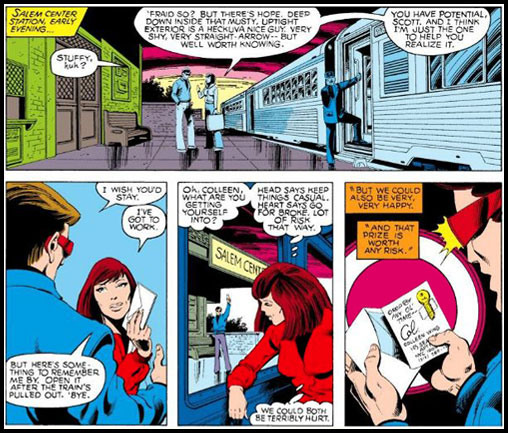 No sex for Colleen

"As near as I can tell from reading the books, Jean was the first normal love of Scott's life," Claremont continued in The Comics Journal #50. "The guy was an incredible loner, an incredibly introverted personality. I couldn't see him being easy with people, anybody, and I wanted to make him more easy with the team, and with people in general. And at the time, Colleen was a convenient peg on which to hang this."

"But again, Misty Knight and Colleen's appearances in the X-Men were for reasons that had nothing to do with the X-Men," Claremont admitted in The X-Men Companion. "I was bounced off Power Man and Iron Fist. (Writer) Ed Hannigan didn't want either of the women in the book, and I said, "Fine, can I take them to X-Men?" and he said, "Sure." You see, I pretty much created them and I wanted to keep control of them."

"I brought these characters with me when I left Power Man and Iron Fist so much for that idea," Claremont sighed in The Comics Journal #50. "The intention was always just to broaden his horizons. They were never going to fall in love. Everyone says, "How dare Scott throw over Jean for Colleen," but if you read those issues, the only person who refers to a possibility of a relationship is Colleen. Scott never picks up on it. He was going to, but events forestalled it. In retrospect, I'm glad they did. It works out better this way."

"If you look at it the way it evolved, at no point does Scott make a move," Claremont added in The X-Men Companion. "Colleen is the one who takes the initiative. They talk a lot, they enjoy each other's company, but at no point does he give her any kind of sexual response or emotional response. Again, I was trying for things that got terminated for reasons that had nothing to do with the X-Men."

The end result was that nothing happened between Scott and Colleen because Scott learned that Jean was still alive and rushed to be with her without giving Colleen another thought. "Again, it's too abrupt," Claremont admitted in The Comics Jounal #50, "but that's because (writer) Jo Duffy felt we were co-opting her characters that rightfully belonged to Power Man and Iron Fist."

"Jo quite rightly demanded them back," Claremont revealed in The X-Men Companion.

"Colleen was introduced for a very specific purpose: To create the conflict that never really came about when Jean came back," artist John Byrne summarized in The X-Men Companion. ""Here's Jean back and here's Colleen, and oh jeez, I jumped into Colleen so fast and I did not care about Jean," and all that kind of stuff, which didn't happen because Mary Jo Duffy quite rightly demanded Colleen back to do stuff with her. Chris has an unfortunate tendency to think that once he's written a character it's his character, and I try to think that once I leave the book I leave the characters behind." 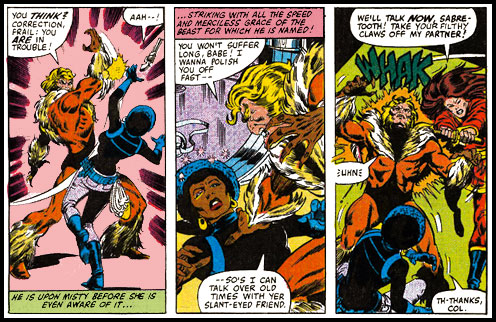 Jo Duffy also laid claim to Sabretooth, who had debuted in Iron Fist, for use in Power Man and Iron Fist. "(Wolverine's father) was supposed to be Sabretooth," Byrne revealed in The X-Men Companion. "Now I don't know. I understand that Mary Jo is planning on doing a Sabretooth story. Whether or not she'll do anything with that I don't know. It's entirely up to her now. It's her character, because she has Iron Fist."

Mary Jo Duffy never did anything interesting with Sabretooth, and when Power Man and Iron Fist was cancelled in 1986, Sabretooth or at least a clone of him finally started appearing in Uncanny X-Men.