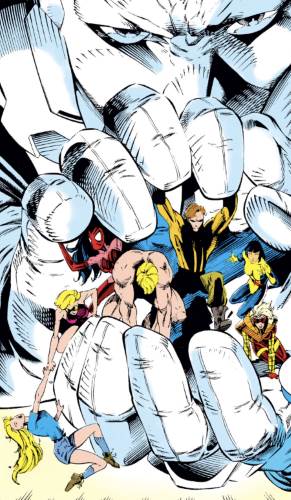 The Upstarts, a club for the rich and bored which hunts mutants for sport and distributes points for murders, have selected a new set of targets: any surviving members of the New Mutants and Hellions. As more and more of their friends are captured in this “Younghunt,” X-Force and the New Warriors separately scramble to try to learn what’s going on and where their allies have been taken to - if they are even still alive. The two teams already have their hands full trying to fight off the Upstarts and extract the information they need, but when they finally encounter each other, will they be able to put aside their past differences long enough to save their friends? Moreover, watching and orchestrating all of this from a higher perch is the mysterious arbiter of the contest, the Gamesmaster, who has his own plans for those involved. Even if they best the Upstarts and locate their allies, will the teams be able to overcome this immensely powerful omnipath? Or will they have to face the fact that, for the Gamesmaster, their elaborate manipulation and utter defeat is mere child’s play?

Deep in the Brazilian rainforest, Magma is ambushed by Fenris and a horde of hired lackeys and quickly subdued. Empath, who is also being pursued by Fenris, desperately flees toward the Nova Roman resettlement camp to try to gain refuge; he and the entire camp are quickly blasted to the ground by the twins. Before Fenris can acquire Empath, however, they and all their remaining lackeys are thwarted by an unexpected source of salvation: Moonstar’s psionic arrows.

At a gathering of the Hellfire Club in Manhattan, the incognito Justice and Night Thrasher quietly discuss Shaw’s plans. Justice explains what he has learned: namely, that the Upstarts are targeting any surviving members of the New Mutants and Hellions teams in a new game known as the “Younghunt.” 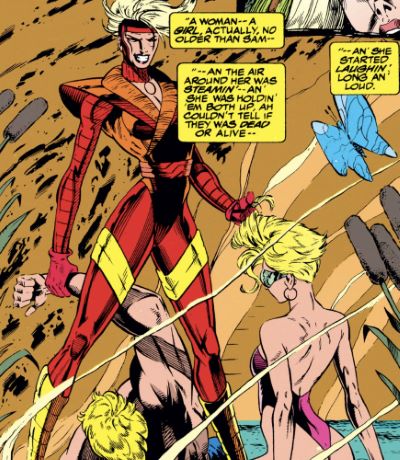 At the Guthrie farm in Cumberland County, Kentucky, X-Force is investigating the mysterious circumstances under which Cannonball and Boomer were recently abducted. Cannonball’s sister, Paige Guthrie, is revealed to have unclear mutant powers; she also recounts witnessing Cannonball and Boomer being knocked out and then teleported away by Siena Blaze. Cable and the rest of X-Force are unable to locate either missing member’s mutagenic signature anywhere on the planet, though, and thus have no idea what to do next.

Inside the Gamesmaster’s mindstream, the Gamesmaster has called a conference of the Upstarts. He chides them for performing so poorly and then explains the new rule: all of the mutants captured in the Younghunt will first be brought to a pre-arranged location, and only once everyone has been acquired will they be murdered and the points disbursed appropriately. Fitzroy takes umbrage at the Gamesmaster’s lecture and soon appears at the Guthrie farm in a suit of futuristic battle armor demanding that Cable turn over Warpath and Rictor.

Meanwhile, Empath and Moonstar have recovered from the incident at Nova Roma and made their way to Madripoor, where Moonstar intends to warn Karma of the Younghunt. After disposing of some foolishly territorial dock thugs, the two encounter a serious threat in the form of Siena Blaze. The danger is seemingly averted, however, when Karma makes her entrance by possessing Blaze.

Justice soon meets with Shinobi Shaw inside his penthouse apartment, where Shaw explains that he wants Justice to capture Firestar for him. At the New Warriors’ headquarters in Manhattan, 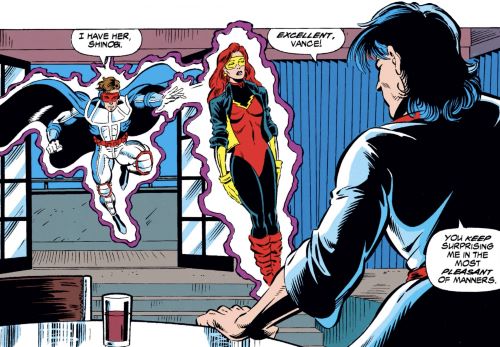 Night Thrasher briefs the entire team about his and Justice’s plot. The discussion is interrupted by Graydon Creed’s armored Tribunal mercenaries, who also wish to capture Firestar. The two sides fight, but the conflict is abruptly ended by the arrival of Justice, who shatters all of the Tribunal’s armors instantly. Justice and Night Thrasher then reveal the next stage of their plan: using Firestar as bait to gain access to the Gamesmaster. An unconscious Firestar is delivered to Shinobi Shaw’s apartment by Justice. Shaw elaborates on his plot to betray the Gamesmaster with Justice’s help so that he can consolidate all of the Upstarts’ power under himself.

The Gamesmaster telepathically listens in on Shaw’s plot. Now aware of Shaw’s impending betrayal, the Gamesmaster turns his attention to the imminent battle between X-Force and Fitzroy before he is interrupted by Siena Blaze’s psionic contact: she presents to him the defeated astral forms of Empath, Karma and Moonstar, and gloats that this brings her total to five kills. 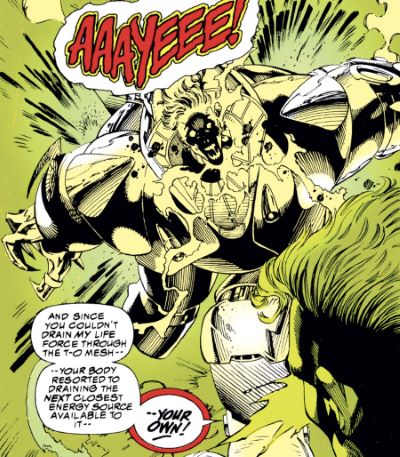 In Kentucky, Cable plots to find Cannonball and Boomer by backtracking Fitzroy’s steps. As X-Force and Fitzroy clash, Fitzroy is tricked into accidentally draining his own life energy by Cable. Fitzroy’s slave, Bantam, does as ordered and opens one of Fitzroy’s teleportation portals using Fitzroy’s own life force. Without X-Force’s knowledge and against her mother’s orders, Paige, wishing to help, activates her mutant powers and leaps in after X-Force, just as the portal closes.

In Manhattan, the New Warriors break in to the offices of GC Investment Bankers, Graydon Creed’s company. Creed taunts the New Warriors before Kymaera makes it clear that they possess the knowledge to publicly out him as the son of two mutants. He immediately backs down and gives them the information they want: the location where the captured Younghunt victims are being kept, which turns out to be the rebuilt Swiss chalet of Shinobi Shaw. At the same time, X-Force appears inside Shinobi Shaw’s apartment; Shaw gloats about X-Force’s inability to harm him until Domino trains a wavelength scrambler upon him. Defeated, Shaw tells X-Force that their friends are still alive and that the captives are being held in his Swiss chalet, pending execution at the end of the game. Cable immediately opens a bodyslide to the location.

Justice arrives at the chalet to deliver Firestar. The Gamesmaster appears and makes it clear that he knows Justice and Shinobi plan to betray him; it is revealed that any attempts to harm him directly will result in the deaths of all of those captured, as their minds have now been linked into his mindstream. Inside the chalet’s holding chamber, Karma has been faking defeat. Sensing an opportunity to act, she rises and frees the others. Before the newly-freed captives can take any further action, however, a Gamesmaster-controlled Siena Blaze bursts into the room and explodes all of the just-freed captives into submission. The Gamesmaster announces his plan to use all the captives as mind-controlled puppets with which he will defeat and kill all those who are coming to rescue them.

Outside the chalet, X-Force arrives through Cable’s bodyslide and immediately encounters the New Warriors; both sides agree to work together rather than wasting time fighting with each other. Cable postulates that there’s no point in making a plan since the Gamesmaster already knows what they’re thinking, so the two teams split off into three groups to engage in a mindless assault upon the chalet. Using his various puppets, the Gamesmaster quickly, and with frightening ease, defeats the first two assault teams. The final team, consisting of Cable, Domino, Night Thrasher and Silhouette, manages to stave off the Gamesmaster’s initial attack. Cable surprises himself by using a burst of telepathy to knock the out-of-control Cannonball unconscious. The effort, however, leaves Cable’s team battered and on the brink of collapse. The Gamesmaster declares that the Younghunt is over and he is the winner.

Paige Guthrie, who somehow managed to sneak along without X-Force realizing it, shouts out that the game isn’t over yet because there’s still one player left. 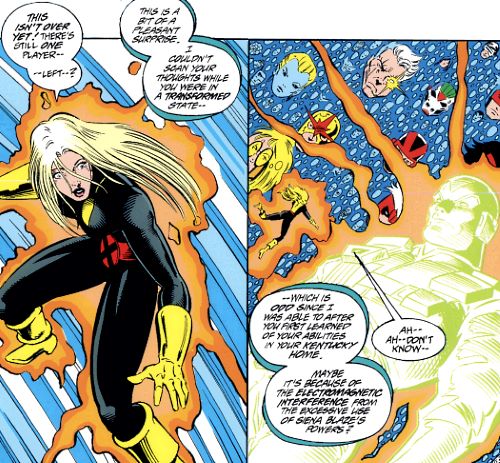 The Gamesmaster sucks Paige Guthrie’s astral form into his mindstream to confront her. Paige desperately tries suggesting a new game to the Gamesmaster: a race to see who will get to find and guide the next generation of young mutants first. The Gamesmaster tells Paige that she wins; she blacks out; everyone’s lives are spared. Before the New Warriors leave, the teams debate whether Paige’s ploy was worth it if it costs them the next generation of mutants. Cable states that if their survival is now going to be a game, then it’s a game they have to play to win. Somewhere, in reply to this statement, a plain-clothed man — seemingly the human body of the Gamesmaster - stares out his window and muses to himself that in that case, let the game begin.