A traditional and powerful organization with roots way back into the last century. Membership is passed on to descendants, or can be earned through wealth or influence. Originally the Club was not about mutants. The Club has many members (ancestors of Worthington, Braddock and more) and next to it's 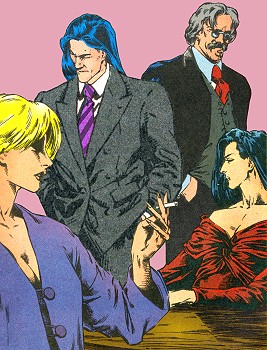 New York setting there is also a London branch. Unknown to most members, the club is ruled by the unscrupulous power mongers in the Inner Circle. Positions are named after chess pieces.

Last appearance: Even though the fates of the various team members remain unclear, it is obvious that they are no longer within the Inner Circle. The Hellfire Club III who first formed secretly in hiding has been seen to be operating from the Club in New York and using the Club's resources.

Powers: Manipulate the density of his molecular structure, increasing his strength and durability, shifting into an intangible state in order to pass through solid objects, or an inter-phasing touch that enables him to remove parts of an object from the whole and scramble the operation of living beings or mechanical objects.

Powers: Manipulates the metabolic systems of other people in order to accelerate bacterium, toxins, or carcinogens within their cells so that they disable her victims from within.

Powers: Emit hypersonic frequencies from her vocal chords, destabilizing the fluid in the inner ear in order to cause vertigo, hallucinations, and brain damage in others.

Powers: Take psionic control of another person’s nervous system, allowing him to control their movements or spark individual neural synapses to cause bursts of pain or pleasure.