The Hellfire Club III (re-)formed while the Hellfire Club II still existed. They founded themselves in hiding, wanting to overthrow the Club’s current leadership. A confrontation between the two Inner Circles has never been shown, but at some point the Club III took over officially. In X-Man #28 for example they are using the Club's official quarters. At least Shaw should have been interested in permanently dealing with his murdering son Shinobi. 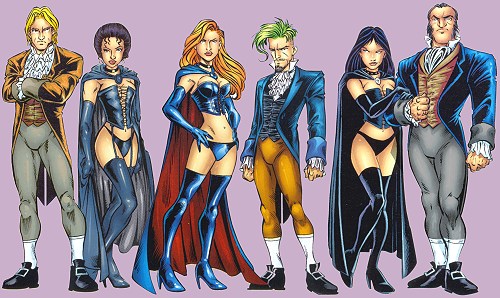 Powers: Exists as a being of pure psionic energy funneled through the X-Man’s mind to create a pseudo-organic body. This physical form only ACTED as flesh and blood; Madelyne could not easily suffer injuries, and these injuries healed phenomenally fast. She also possessed telepathic, psychokinetic, and teleportational abilities.

Fact: Writer Stephen Grant has been quoted on some Message Boards with “Madelyne“ having been impersonated by the evil alternate Queen Jean, ever since #5. However this contradicts his own writing in X-Man #67, where Queen Jean says: “I replaced your Maddie several months ago.“ This quote clearly points at an undocumented exchange having taken place. When asked about this contradiction, Grant replied that only the facts written in the book count, while what he was talking about on the internet was what he would have liked to be the case had he been given full free reign. Besides Queen Jean being “Maddie“ since X-Man #5, he had planned to reveal that she actually was Jean / Dark Phoenix having blasted herself out of this reality in Uncanny X-Men #137 – however this too never made it into the issues.

Powers: Absorbs kinetic energy or electricity into his body, immunizing him to most forms of physical injury while converting it into raw power that increases his strength and resilience. His body has an upper limit of energy it can metabolize, sending him into a coma if it is surpassed.

Powers: Drain the life energy from other people upon contact, metabolizing it into different forms of chronal energy, allowing him to freeze people in a moment of time, reverse or accelerate their personal timeframe, and materialize portals that allow travel through time and space.

Equipment: crystal armor with built in weapons, had a set of future Sentinel versions

Facts:
- Fitzroy is from the same future as Bishop, where he was a wanted criminal.
- He often brings his lackey Bantam with him. Bantam has the ability to anchor (or pinpoint) the time-portals.
- At the time of his association with the Club, Fitzroy could only open portals through time.
- Originally, Fitzroy was not as blood-thirsty and only drained small portions of other people's life energy to power his portals. As a result, he at first believed his temporal portals to be teleportation portals, since he would only travel at most a few minutes back in time.

Powers: Absorbs the life energy of other living beings, reducing them to stray molecules while charging his own body with energies that he converts into bio-nuclear microwave blasts of enormous destructive power. His energy matrix is housed inside a crystalline armor that gives him augmented strength and durability, focuses the raging energy he possesses, and can utilize the life-force he has siphoned to reformat itself into a pseudo-organic human state.