Since Selene remained alone after the Inner Circle of Hellfire Club III fell apart, she recruited new members, members that fit her ideas for a true HELLfire Club. 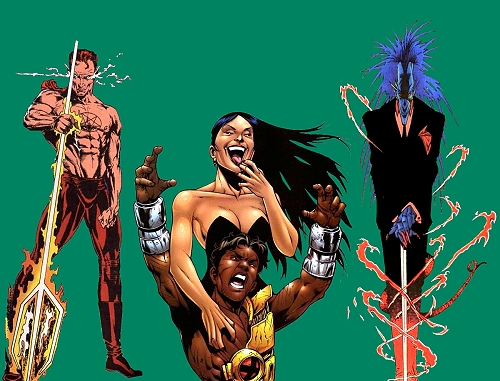 Powers: The Son of Satan, Hellstorm has superhuman strength, agility, and endurance. He can also channel soul-fire through his hands or through his netherandium trident as mystical pyrotechnics that burn the body and soul, or use the soul-fire to heal the bodies of others. He also possesses the ability to teleport across inter-dimensional barriers, and has a wide assortment of magical abilities drawn from his control of a corner of Hell.

All Hellfire IV appearances: none

Powers: Psychometric ability enables her to manipulate the mental imprint of another person after taking it from a solid object. This allows her to feel any thoughts or emotions that person had when previously in contact with the item, and allowing her to influence their mind from a distance after the initial contact.

Note: Adrienne was not seen with any club members and she has lied to her sister more than once. She might just have taken the name to annoy Emma. Her powers also do not fit Selene's wishes to create a HELLfire Club, and she is dead now anyway.

Powers: Absorb sunlight and other sources of heat energy, re-channeling them into concentrated solar energy that he can direct as waves of intense heat, dark plasma blasts, and thermal updrafts that allow him to fly.

Sunspot originally metabolized solar energy into an energy charge that increase his strength, endurance, and resilience. He later learned how to focus this charge outwards as concussive blasts, energy shields, and thrust for flight. The many changes he has experienced at the hands of Cable, Reignfire, and the Damocles Foundation make it unclear as to if he can still access physical power enhancement.