The mutant population has been reduced to a fraction of what it once was, thanks to the reality-warping powers of the insane mutant hero, the Scarlet Witch. Following the senseless and accidental death of a young mutant, Dr. Henry McCoy a.k.a. the Beast, decides to use his scientific expertise to seek out all methods, even the unorthodox, to find a cure for the impending extinction of his species.

A young mutant who retained his powers following M-Day is run over by a car and killed. His funeral is attended by representatives of the X-Men, X-Factor and New X-Men, along with Bishop and Sebastian Shaw. Each of those attending deals with the senseless death in their own way, including some both cursing and envying the deceased mutant. When Madrox suggests that he could repopulate the mutant species, the Beast explains that it doesn’t work that way, and vows to find a cure… or die trying. 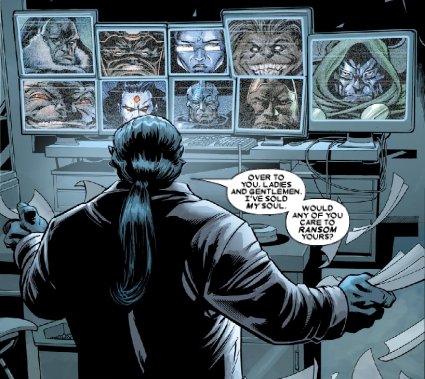 Later in his lab, the Beast contacts several adversaries of the X-Men and well-known villains, including Dr. Doom, Mr. Sinister, the High Evolutionary, Dr. Kavita Rao, Mojo, the Sugar Man, Arnim Zola, Modok and Pandemic. He gives them a detailed history of M-Day and the events that followed, including the work he and various other brilliant scientists have tried in finding a cure. The Beast then asks them for their help, offering in return the myriad of discoveries that he has made.

Next, Hank visits Dr. Kavita Rao, who has been attempting to clone a mutant from inert mutant DNA. However, now a pariah in the scientific community thanks to her connection to Ord of the Breakworld, she is returning to India. In her absence, she offers Hank her facility and the Breakworld research, which included X-gene samples of every mutant that came to her for the cure. Unfortunately, following M-Day, the X-gene has since ceased to exist, making them useless. As a final thought, she warns him not to get blood on his hands, as she did with Ord.

Later, Beast meets with several of his fellow X-Men to discuss the fabled Neverland, a concentration camp where many mutants had been imprisoned, experimented upon and killed. Briefed by Wolverine on his trip there, Beast makes his way to what remains of Neverland in Canada, and uncovers a myriad of records, files and accumulated data – all of which have already been pored over, presumably by the High Evolutionary’s mysterious “other.” When he runs across journal entries regarding Neverland’s final days and the termination of the camp’s mutant prisoners in a mass grave, an incensed Beast frantically begins to claw at the dirt. He stops abruptly when the mysterious “other” reveals himself: in fact Beast’s other self – McCoy the Dark Beast!

Hank’s initial reaction to the Dark Beast is hostile, however the Dark Beast quickly convinces Hank that he too finds mutants’ impending extinction unpleasant and is also investigating a cure. McCoy eventually persuades Hank into an uneasy alliance to avoid duplicating each other’s work, though Hank insists that McCoy must follow his lead.

Soon thereafter, en route to Alamagordo on the Dark Beast’s aircraft, McCoy gives a potion, essentially “liquid memory,” to Hank so that he instantly knows everything that McCoy knows, as opposed to spending three months reviewing his paper work. Hank reluctantly drinks the potion and experiences horrific memories along with the knowledge, including the horrors of McCoy’s world, the Age of Apocalypse, and what McCoy did to that world’s versions of Hank’s friends. With Hank up to speed, McCoy inquires about the state of the Grey family, specifically Jean and Nate, both of whom Hank explains are dead – at least for the moment.

The two soon arrive at the now-abandoned nuclear plant in Alamagordo, where Xavier’s father and step-father both conducted research many years before. McCoy quickly uncovers a hidden facility, along with data linking Mr. Sinister, Destiny, Amanda Mueller and Kurt Marko to the “Project Black Womb” in which experiments were conducted on mutant children. When McCoy suggests that the two of them may have to go down the same track, Hank declares that he will die before he does anything like that. After further exploration, spurned by a conversation McCoy had with Sinister, the two find Sinister’s hidden lab, along with the corpses of SHIELD agents which had been surveiling the plant and a still-functioning but obsolete SHIELD robot left behind and reprogrammed by Sinister. After dealing with it, the two discover that all of Sinister’s data is gone, just like at Neverland. McCoy reveals that, though he is the one who erased the Neverland data (which was of no use to them anyway but potentially dangerous in the hands of others), it was Sinister who took the data from Alamagordo.

Denied Sinister’s samples, the two Beasts realize that they will have to get creative and decide to obtain their mutant DNA samples from the ruins of Genosha. Once there, they set up shop in one of the old labs that Xavier provided for McCoy when they both resided there and begin extracting samples from corpses. Astonishingly, their tests reveal that the X-gene has disappeared even from mutants who died before M-Day.

This gives Hank an idea for an experiment. They could use the genome of mutants who retained their powers as a template to somehow re-create the X-gene and implant it into depowered mutants. To accomplish this, Hank explains that there is a drug called Mutant Growth Hormone which temporarily gives powers to normal humans and, as it has been reported since M-Day, it must be manufactured from old mutant samples, which the creators are keeping viable. The one person who might know about MGH, Hank explains, is Bishop.

Without the Dark Beast, Hank meets up with former X-Man Bishop in the former “District X.” Though Bishop no longer patrols the neighborhood, his contacts are still good and they soon meet with a well-known MGH dealer, who regretfully reveals that when M-Day struck, even the MGH lost its X-gene. A shrewd businessman, though, the dealer offers to buy Hank’s blood for fifty grand a pint, no limit. Hank’s reply is a most definite “no” when he threatens to drop the dealer out the high-story window. As they depart, the dejected Beast asks Bishop about his demeanor toward the apparent extinction of mutantkind. However, when Bishop replies that he does not believe it will happen, due to mutants being plentiful in his future, Hank points out that this was in an alternate future – a fact which suddenly provides an inspiration.

Hank meets with Forge and discusses the Beast’s realization that not a single mutant from an alternate timeline has lost their powers. To Hank’s disappointment, however, Forge replies that, after an incident with a Nimrod sentinel from a mutant-populated future, he constructed a device which could scan mutants in alternate realities. Unfortunately, he discovered that they had all flatlined, including the Age of Apocalypse, XSE and Nimrod futures, meaning either the futures no longer exist or they do but there are no mutants in them. Incensed, Hank departs, pushing Forge away when he offers to help him.

The Beast meets up with McCoy once more, who has come up with another idea: that they could isolate chromosomes from normal humans who have mated and produced mutant offspring, as the Scarlet Witch only destroyed the X-gene, not its building blocks. The only problem McCoy foresees is identifying the right humans - but Hank already knows where to look, and it’s not long before they arrive at the Guthrie home in Kentucky. After a brief reunion, Hank and McCoy explain to Lucinda Guthrie that they want to take a sample of her genes; after all, she produced five mutant children out of a total of ten. However, after Hank explains that Lucinda’s DNA could be the missing link and that it might reactivate the mutant gene, Lucinda flatly refuses, reminding Hank of all the trouble her family has been through with her children and their powers. 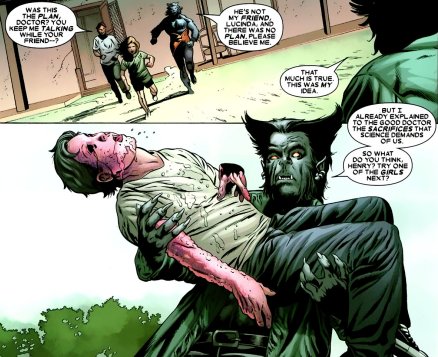 While their discussion continues inside the house, outside McCoy the Dark Beast plays on young Lewis Guthrie’s wish to have powers like his older siblings and gives the boy a vial of potion, assuring him that it will give him some sort of powers. Instead, it leaves him in a near-death state, horrifying Lucinda and enraging Hank, the latter of whom attacks his dark doppelganger. Their scuffle ends abruptly, however, when Lucinda shoots McCoy with a shotgun, and warns Hank that he had best help her son.

All his options exhausted, Hank believes that he has failed. However, after a brief encounter with Spiral, whom media-mogul Mojo sent to inspire the Beast to keep the ratings-grabbing mutant race alive, Hank turns his attention away from science-based solutions and looks to magic. Hank visits Dr. Strange, who knows why Hank has come and informs him that he has been on a similar journey, exploring the magic-based solutions to the possible mutant extinction. Dr. Strange reveals that Wanda’s spell was cast over billions of souls, over worlds and dimensions, and that, if he were to try and reverse it with magic, all of reality could implode as a result.

Unable to help directly the Beast, Dr. Strange attempts to do so indirectly. The Sorcerer Supreme astrally projects the two of them through various alternate realities to determine what steps alternate Beasts may have taken in their attempts to reverse M-Day. However, in each reality, they find that the native Hank McCoy has similarly found no answers. Returning to Strange’s sanctorum, the Beast admits he has no idea what to do now.

Some time later, the Beast wakes from yet another dream where he is discussing with the Scarlet Witch how her actions caused M-Day. Upon waking, he discovers he has been tracked down by Nightcrawler, who pleads with him to return to the Institute. However, the Beast cannot, as he has one more stop to make. He feels that some unknown force is compelling him to visit Transia, current residence of the Scarlet Witch. 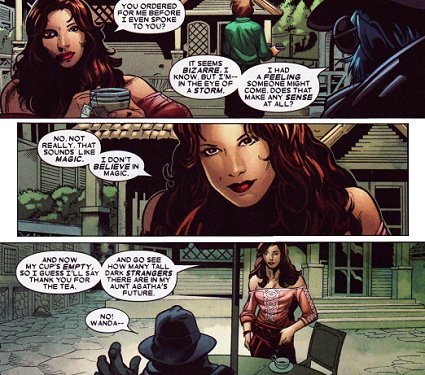 Passing a café, Hank feels compelled to stop and order tea for two. To his surprise, he is soon joined by Wanda who is drawn to join him, though she does not seem to know who he is. Over tea, the two discuss magic or rather Wanda’s lack of belief in it. Further, to make a point about getting what one wishes, she proceeds to tell Hank a story - about the fisherman who accepts a magic comb from a mermaid and is granted three wishes, with disastrous results.

From this and Wanda’s other cryptic statements, Hank tries to determine whether Wanda truly cannot recall her past life or if she is fully aware and simply chooses not to admit it. Having finished her tea, Wanda leaves Hank with two final thoughts. The first is the moral of her story: that you can get what you wish for and still be worse off than before. The second is that she has made her own choices and that the quiet life now suits her. With this, she departs and wishes Hank good luck with his research.

Before returning to the X-Men, the Beast makes a final stop at Neverland where he sifts through the mass grave of the last purge and gives each victim their own grave and marking. His task complete, the melancholy Beast notes that all you can do in the end, for the dead and for the past, is… to live.