Genosha is a small island nation that tests every citizens for mutant genes. If tested positive one becomes property of the state. In a special process designed by Genegineer David Moreau the person is stripped of any free will and turned into a mutate to serve the state. Since the X-Men once had a conflict with genoshan forces they (and associated people like X-Factor and the New Mutants) are now considered enemies of the state. When least expected Genoshan forces attack Xavier’s school and take prisoners. Later the remaining mutants try to rescue their friends and are captured too, two of them are even turned into mindless mutates.

Once on Genosha the teams discover the real enemy behind Genosha‘s government : Cameron Hodge. He was X-Factor’s spokesman but secretly a mutant hater; during Inferno he made a deal with N'astirh and gained immortality. Later Angel chopped his head off, and Hodge had to discover that being immortal can be a curse. He now needs an ugly technological body.

Genosha wants to put the X-Men on trial for the "crimes" they comitted on their island. They attack Xavier's school and kidnap Storm and Wolfsbane, Boom-Boom, Rictor and Warlock of the New Mutants. Of the prisoners only Storm was among the team that had battles earlier on, but all are considered guilty. Evidently being a mutant is crime enough. Surprisingly one of the attacking Magistrates is Havok. After being teleported by Pipeline to Genosha and being stripped of their powers by Wipeout, the captives learn the true face of the enemy. Cameron Hodge, a villain of X-Factor, has taken control of the island.
Warlock, already weakened from the digitalized teleport, spends his last energies helping the others escape. On her way out of the citadel Rahne learns that Hodge plans to transfer Warlocks shapeshifting power onto himself. She heads back and is able to prevent the transfer, but not Warlocks death. She herself is captured again and turned into a mutate.

The remaining New Mutants (Cable, Cannonball, Sunspot) and X-Men (Gambit, Banshee, Forge) contact X-Factor for a rescue mission. They arrive on Genosha's coast and encounter a full team of Magistrates. Cyclops too is surprised to recognize Havok as one of them. He tries to reestablish his memory but Pipeline teleports the Magistrates out. 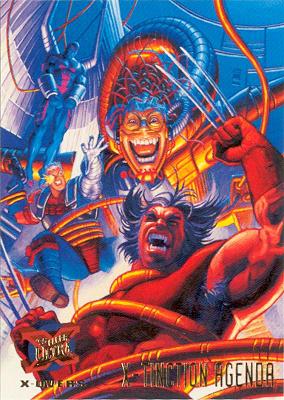 Wolverine, Psylocke and Jubilee, who had been traveling through South Asia, heard of their friends' fates through the news, they rescue the escapees Boom-Boom and Rictor from Tam Anderson and her team of Magistrates. Jubilee is left to care for the powerless couple, while Psylocke and Logan, disguised as Magistrates, infiltrate the citadel. Ironically Havok discovers the infiltrators and captures Logan and Psylocke.

The Genegineer starts to disagree with Hodge, yet President Reneau orders him to go along. Later the escaped Storm hid herself in the Genegineer's office and takes him hostage, but she is easily defeated by Hodge, who orders her to be turned into a mutate too.

One half of the rescue team (Jean, Cable, Gambit, Forge and Sunspot) attacks the Magistrates' citadel, but they are easily captured thanks to Wipeout's power canceling. The other half of the rescue team (Cyclops, Banshee, Cannonball, Archangel, Beast and Iceman) tries a different approach. Disguised as mutates they make their way into the citadel, but too they are discovered. Upon seeing Cyclops beaten by Hodge, Alex remembers who he was before he stepped through the Siege Perilious.

Anderson and Moreau are plotting behind Hodge's back. They even contact Wipeout while a mock trial takes place, during which the X-Men are found guilty; they may choose between a life as a mutate or death. They choose death and are handed over to Hodge. Havok secretly tries to help the X-Men, but as Hodge learns about the backplotting he kills Wipeout to insure that the X-Men remain powerless; afterwards he tries to frame Havok for the murder. Anderson takes the mutate Storm to the X-Men, who just freed themselves. As Storm throws a lightning bolt at Cyclops something strange happens. Storm is restored to adulthood and has again her free will. Cyclops' optic blast returns too. Anderson reveals that Storm was the Genegineer's secret weapon. Instead of being turned into a mutate, she received the ability to restore the others powers. Meanwhile the Genegineer has set off a bomb in the citadel's basement, the explosion causes major damage and confusion. Hodge kills the Genegineer for destroying his lab and his plans.

Storm returns all of her teammates powers. Wolfsbane can't be restored properly since she underwent the mutate process. As long as she stays in her wolf-form she has a free will, but if she ever changes back to human, she will be a mindless mutate again. United the X-Men fight and defeat Hodge. Rictor destroys what remains of the citadel. The Magistrates led by Anderson turn against their government and take control of Genosha. Havok and Wolfsbane decide to stay in Genosha to make sure, that the new government cares for mutant rights.