Hope, the alleged mutant messiah, and Cable, her protector, remain trapped in the future, having lost their means of returning to the present. Bishop, convinced Hope will grow up to be the destroyer of the world, continues to pursue them. Meanwhile, in the present, Cyclops finally devises a way to send his black-ops team X-Force to the future to retrieve Cable and Hope – and execute Bishop, while they’re at it. However, X-Force gets more than they bargained for, when they find themselves facing off not only against Bishop, but also against some help he recruited – namely Cable’s evil and presumed-dead clone, Stryfe. Will the help of a decrepit, 1,000-year-old Deadpool shift the odds back in X-Force’s favor? And can they continue to count on their teammate Archangel after he encounters his former master, Apocalypse?

Several hundred years in the future, while pursuing Cable and Hope, Bishop happens upon the final resting place of Apocalypse. He refuses to let this chance discovery go to waste. Traveling to a time not far beyond the present, he tracks down Stryfe, who happens to be both Apocalypse’s forsaken protégé and Cable’s clone, and offers him a quid pro quo: if Stryfe will help him capture Cable, he will help Stryfe destroy Apocalypse. Stryfe accepts and together they travel to Apocalypse’s chamber and assault him during his hibernation. Because of his weakened state, they manage to defeat him – but just barely. They then kidnap a young time-warping mutant named Kiden Nixon from somewhere in the timestream and use her to lay their trap for Cable.

In the present, Cyclops and Beast finally pinpoint Cable's position in the timestream. Intent on preserving the mutant messiah's life at any cost, Cyclops decides to rip X-Force from their in-progress mission to save Boom-Boom and transport them to the year 2973 A.D., where they are to retrieve Cable and Hope and assassinate their pursuer, Bishop. Beast objects to Cyclops using the X-Men as killers -- especially considering their target is a former X-Man himself -- but Cyclops ignores his friend's protests and extracts X-Force anyway.

Upon arriving in the future, the members of X-Force realize they are trapped: neither their time-travel devices nor Vanisher’s teleportation ability works. 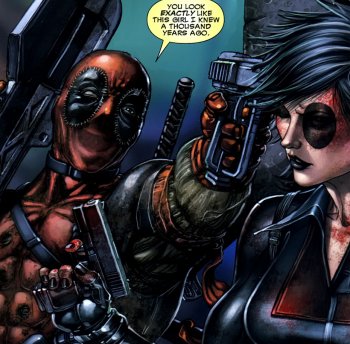 This leaves them with only the allotted 32.5 hours to complete their mission before their bodies deteriorate. They soon come under sniper fire but discover the sniper is actually Deadpool, somehow still alive after a thousand years. Upon recognizing that several of his targets are also his former allies, Deadpool ceases fire and agrees to accompany them to Westchester to find Cable.

Before long, they locate Cable and Hope. X-Force is surprised to see the mutant baby has aged almost ten years. Cable further unnerves X-Force when he directs their attention to a nearby city built in the shadow of a familiar structure: Apocalypse’s Celestial Ship. When they ask Deadpool for an explanation, the mercenary claims he was trapped in a storage container for eight hundred years, only to emerge to find the world in shambles – and Stryfe, not Apocalypse, in charge. Although he admits he initially allied with Stryfe, he claims to have since defected because of the injustice of Stryfe’s tyrannical rule.

Elsewhere, Stryfe and Bishop receive word that Cable has been found and send a battalion of troops to attack. The legion of soldiers ambushes X-Force and their allies on a mountain pass. To make matters worse, X-Force loses a teammate when Archangel inexplicably departs and heads toward the source of a mysterious noise beyond the hillside. 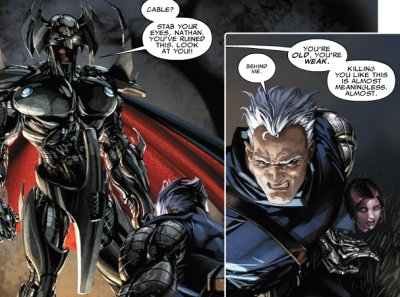 Those who remain fight for their lives. With Deadpool’s help, they manage to defeat Stryfe’s army. Their respite doesn’t last for long, however; Stryfe personally ambushes them as they march toward the Celestial city. After dismantling X-Force, he kidnaps Hope, who intrigues him.

Archangel, meanwhile, arrives in the resting place of Apocalypse and finds his former master alive, but on the verge of death. He finds himself conflicted between wanting to both serve and slay his decrepit master. Archangel manages to resist both temptations and instead restores Apocalypse to full health. Apocalypse, confused by his former Horseman’s gracious actions, pushes his doubts aside and suggests they kill Stryfe together.

Meanwhile, inside Stryfe’s Citadel, Stryfe decides to probe Hope’s mind. Bishop panics; he dares not allow Stryfe to learn the truth about Hope. In a desperate move, he incapacitates Stryfe, lines up a shot at Hope and fires. Stryfe recovers in time to stop the bullets and neutralize Bishop. He then reads Hope’s mind and discovers the truth of her nature. Bishop regains consciousness, blasts him and once again tries to kill Hope, but Stryfe intercepts the attack, dismantles Bishop’s cybernetic arm and imprisons him.

With Hope now in Stryfe’s hands and only eight hours to return to their native time, X-Force and Cable craft a plan. Cable, Wolverine and Elixir are to charge Stryfe’s citadel 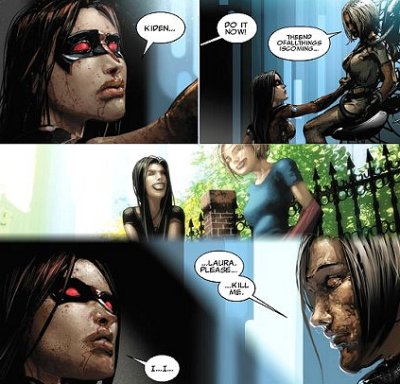 while Domino, Vanisher, Deadpool and X-23 search for the source of the time-travel blockage. They separate. As Domino, Deadpool, X-23 and Vanisher search, their health worsens. Deadpool, suddenly afflicted with a conscience, reveals to Domino that he’s been a sleeper agent for Stryfe all along and that he has kept him updated on X-Force’s moves. Overwhelmed by his guilt, he sets out to fight Stryfe. After he departs, the others discover that the chronal net keeping them in the future actually originates from an enslaved mutant named Kiden Nixon, whom X-23 knows from her days on the streets of New York City. They struggle with whether or not they should kill her to allow their return home but, when time finally runs out, Domino takes it upon herself to execute the enslaved mutant. The chronal net drops, allowing X-Force to return home after they complete their mission. Vanisher, immediately taking advantage of this, abandons the team and returns to the present long before the job is done.

Elsewhere, Stryfe – having been kept up to date by Deadpool – is prepared for Cable, Wolverine and Elixir’s “surprise” attack. He swiftly incapacitates the three of them. Deadpool arrives amidst the fracas and shoots Stryfe, knocking him off the platform. Stryfe survives, however, and repays his subordinate’s treachery by ripping him in half. 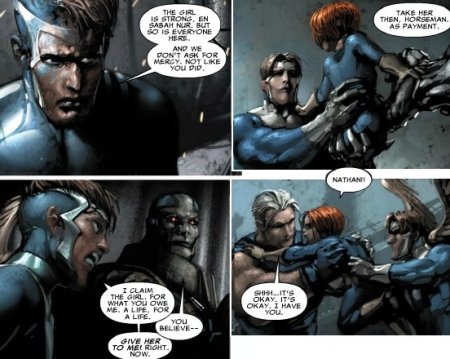 When all hope seems lost, Apocalypse and Archangel arrive and beat Stryfe into submission. Bishop takes advantage of the distraction and lines up a clean shot at Hope – but decides not to take it. Enraged, Apocalypse accosts Bishop for trying to destroy a mutant so important to the future of the race. Not daring to tackle the immortal mutant alone, Bishop escapes into the timestream. Apocalypse then takes hold of Hope, who he senses is powerful enough to host his essence. Although X-Force prepares to fight Apocalypse to get her back – or worse, kill her to prevent Apocalypse’s ascension into such a powerful vessel – Archangel bargains with his former master for her release: because Apocalypse owes Archangel his life, Archangel asks that he return Hope as payment. Apocalypse obliges him and then leaves with Stryfe, intending to make him his new vessel instead.

After the battle, X-Force defies Cyclops’s orders and allows Cable and Hope to jump back into the timestream. However, Hope doesn’t want to leave her new friends just yet, though Cable doesn’t give her any options. Just as the two of them slip into the timestream, Elixir has an epiphany about her Hope’s nature – but does not get the chance to reveal it. The team, whose health is rapidly deteriorating, returns to the remains of New York City. Wolverine, Elixir and Archangel remove their armbands and return to the present to prevent Bastion’s looming terrorist attack on the United Nations building. The others, nearly dead, head to their point of origin to save Boom-Boom. Only X-23 remains in the future long enough to reach her destination. Determined to save Boom-Boom’s life, she crawls to their arrival point, raises her gun and removes her armband, ready to complete her mission.

Bishop, meanwhile, returns to the present and plots his next move toward exterminating Hope Summers.