Arize, the creator of Mojoworld’s Biped race and the inadvertent cause of its violent rebellion, vows to correct the wrongs he has committed. With several agents of the Wildways hot on his trail, he travels to Earth in search of answers – and possibly help from the X-Men. Will he find a way to restore an inkling of sanity to his homeworld before the ratings-hungry agents of the Mojoverse apprehend him? And what, exactly, does any of this have to do with Shatterstar?

Once again, it’s rebellion season in the Mojoverse and, like all the rebellions that came before, the current attempt at social upheaval seems doomed for failure. The powerful armies of the Spineless Ones close in on Arize, the rebellion’s most valued member and the one known throughout the Mojoverse as the Giver of Life. Mojo watches gleefully as his troops surround this most prized of prizes. Arize, however, refuses to submit. In a desperate gambit, he transports himself across space and time, not entirely caring where he ends up as long as he no longer has to serve Mojo. Of course, Mojo pursues him.

Arize appears on Earth in the Hindu Kush of Afghanistan with no recollection of his identity or purpose. His arrival registers on Cerebro, however, and Professor Xavier sends his Blue Strike Force to investigate. The X-Men reach the unconscious Arize moments before Mojo’s own motley retrieval team arrives on Earth in search of the same target. Naturally, Mojo broadcasts their mission live, as he believes capturing Arize on television might make for great ratings. Psylocke detects the arrival of these visitors from Mojoworld – as well as their malicious intent – and alerts the X-Men. Live on Mojovision, the X-Men ambush and easily defeat the retrieval team and send them running back home with their colloquial tails between their legs.

Just as the retrieval team leaves, however, Gog the hunter-tracker mentions his existing grudge with the X-Men for harboring Longshot, the Fallen Messiah of Mojoworld. Rogue and Wolverine’s ears perk up at this offhand comment and try to follow them back to the Wildways for more information. However, Cyclops refuses to let them go. They came for Arize, and with their mission complete, must return home to Westchester. Beast has a more pressing question. At some point during the fight, he heard the retrieval team refer to Arize both as the Giver of Life and the Taker of Life. He asks how one man could bear both titles – a question the amnesiac Arize is unable to answer. [X-Men Annual (2nd series) #1]

Unfortunately for the retrieval team, they have to report their failure to their master, Mojo. Mojo’s, aide Major-Domo, adds insult when he informs Mojo that, although the broadcast earned phenomenal ratings, audiences reportedly found Mojo’s farce of a rescue operation hysterical. Humiliated, Mojo gives up on Arize – for now. Meanwhile, his rival, Mojo II, silently observes the mad ruler’s theatrics and plans his coup d’état. In the Mojoverse, ratings equal power, and Mojo II has several ideas lined up for siphoning Mojo’s viewership. He plans on airing a live broadcast in which his own retrieval team, the Death Sponsors, capture one of the Mojoworld denizens left stranded on Earth by Mojo. Of the three possible targets – Longshot, Spiral and Arize – the Death Sponsors deem Arize the easiest recovery. They head to Earth immediately. [X-Men Annual (2nd series) #1, Uncanny X-Men Annual #16] 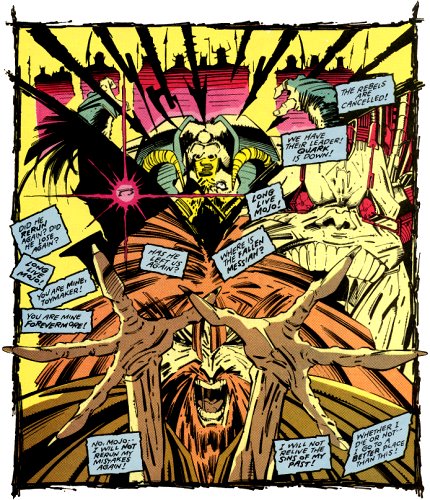 Meanwhile, in Westchester, Professor X and Jean Grey struggle to nurse the amnesiac Arize back to health. During their search through his incomprehensible memories, they discover fragments of evidence about the seemingly dual nature of his reputation on the Mojoverse, but no concrete answers. Unfortunately, the Death Sponsors arrive and interrupt this psychic therapy. Quite the opposite of Mojo I’s recovery team, this group of professional warriors overpowers and outsmarts the entire Gold Strike Force of the X-Men, including Professor X. However, they make the critical mistake of underestimating Bishop.

Before they jaunt back to the Mojoverse, Arize, having resigned himself to capture, asks to at least be told why everyone wants to capture him so badly. The Death Sponsors restore his memories as per this request. Moments later, they begin to time-dance back to the Mojoverse, but at a critical moment in the jaunt, Bishop shoots their time-dancer with his shotgun. The disruption scrambles the signal and scatters the various Death Sponsors through the void between space and time. Miraculously, Arize emerges unscathed. With his memories restored, Arize reveals to the X-Men the harsh truth about his existence: it was he who created the humanoid slave race of the Mojoverse. He therefore holds himself personally responsible for the thirteen millions deaths that resulted from the slave rebellion. He vows to right this wrong by restoring honor and dignity to the Mojoverse. To do this, he intends to walk the Earth in search of what makes mankind so unfamiliarly valiant. The X-Men allow him to leave. [Uncanny X-Men Annual #16]

During his travels, Arize has an epiphany. He remembers the genetic disposition of the Spineless Ones to absorb all of the broadcast wavelengths coming from Earth. Therefore, Arize decides to filter these broadcasts, and only allow the ones to pass that portray the benevolent qualities of mankind. He sets up a retrieval array in an isolated cabin in South Dakota and transmits these filtered broadcasts back to the Mojoverse. [X-Factor Annual #7, behind-the-scenes] 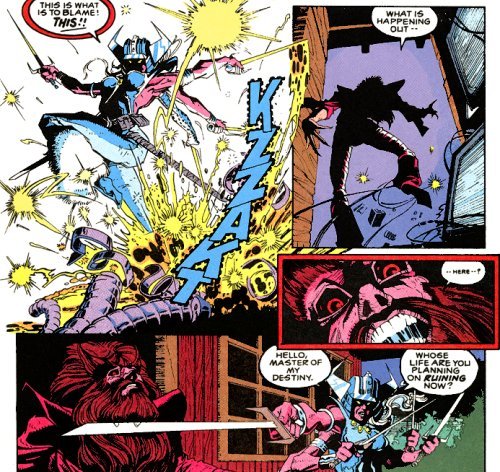 Never one to stick to his guns, Mojo decides he does want Arize back after all. However, he doesn’t want him back to make more slaves; he instead wants to execute him on live television. For this task, he sends for Spiral, who enthusiastically accepts and tracks Arize to his cabin in South Dakota. Her motives are not what they appear, however. Blaming Arize for her current appearance and twisted condition, the bloodthirsty Spiral wants nothing more than personal revenge. Fortunately for Arize, moments before Spiral proceeds with the execution, X-Factor – Valerie Cooper’s latest government-sponsored mutant affairs team – arrives and intervenes.

X-Factor manages to subdue Spiral long enough for an overdue explanation. Finding she now has a sympathetic audience, Spiral tells her tragic tale. She explains that she used to be an exuberant human woman named Ricochet Rita until Mojo and his servant captured her, tortured her, drove her insane, and – with the reluctant help of Arize – augmented her body. Worse, Mojo then sent his new creation Spiral back through time to capture the original Ricochet Rita, essentially forcing her into an endless time-loop of self-destruction. Telling her story eases the chronic torment Spiral feels. Having calmed down, she and Arize speak to one another rationally and, together, decide to return to the Wildways to defeat Mojo and put a stop to his the endless cycle of perpetual pain. Before she leaves, however, Spiral mentions that only the male child of a human and an Arize-spawn will be able to lead the Mojoverse out of its state of oppression and slavery – a child whose name shall be Shatterstar. [X-Factor Annual #7]

Flash forward several years: X-Force, which now includes Cable, Cyberlock, Siryn, Cannonball, Warpath and Shatterstar, travels to the Mojoverse 100 years in the future, deposes Mojo V as leader, and places Shatterstar on the throne. They leave, believing their mission accomplished. However, the world under Shatterstar’s leadership remains as bad as ever. [X-Force Annual #1, behind-the-scenes]

Ten years later, Earth time, Arize returns to the X-Mansion, once again in search of the X-Men. He instead finds Cannonball’s new X-Force team, most of whom he doesn’t recognize. Nevertheless, Arize tells them the state of things in the Wildways is just as bad under Shatterstar’s rule as it was under Mojo’s. He implores X-Force to assist him in overthrowing the leader they helped install so they can establish a new era of freedom, peace, and equality. X-Force agrees. 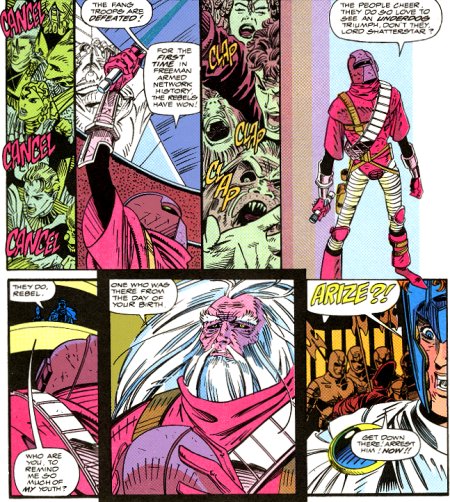 They travel back to the future of the Wildways. Arize and his companions, the Spineless Ones Milton and Shecky, enroll in a battle in the Wildways arena in order to capture Lord Shatterstar’s attention. Meanwhile, X-Force raids Shatterstar’s ruling box and pins his troops. With the Master Programmer’s attention rapt, Arize implores him to renounce the oppression of the Mojoverse and actually try to change things. Shatterstar agrees; he was fed up with the horrors of the Mojoverse anyway. Arize, X-Force, and Shatterstar join forces and swiftly defeat those who oppose the new world order of equality and justice. In an unprecedented move for the Mojoverse, however, Lord Shatterstar actually shows mercy to his enemies. The rebellion successfully ushers in a new era of peace, unity, and collaboration between all the people of the Mojoverse. Unbeknownst to them, Longshot, now much, much older, watches this prophesized event from the shadows and smiles. [X-Force Annual #1] 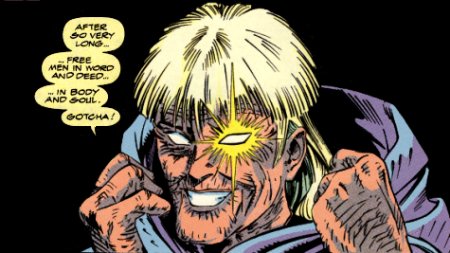