With several team members missing or dead, Freedom Force are sent on another mission, not knowing that it will become their last. While trying to rescue a German scientist from falling into Iraqi hands, the would-be heroes run into Desert Sword, an Arabic group of super-powered individuals, who prove to be more than a match for Freedom Force.

The Killing Stroke is no crossover in the classical sense, but a three-part story that was published as back-up features in the “Kings of Pain“ Annuals.

Led by Crimson Commando, the remaining members of Freedom Force are sent to Kuwait City, their mission being to obtain the German scientist Reinhold Kurtzmann and bring him to the allied forces. The team believes this to be an simple job, and after easily stopping an Iraqi tank patrol, 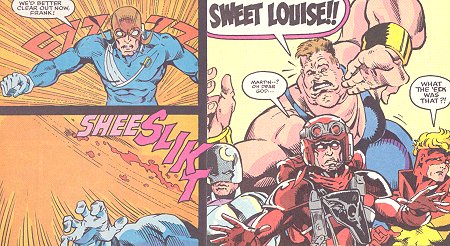 they begin taking out guards, killing everyone. Freedom Force proceed to the safehouse where they were to pick up Kurtzmann, but they find the building empty. Too late, they realize that they are trapped, and Super Sabre is decapitated by an unseen opponent, who also injures Crimson Commando. 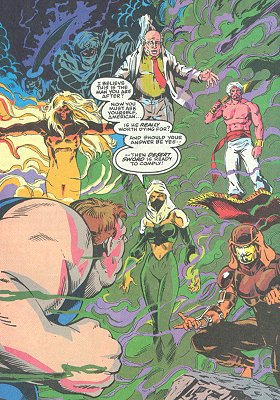 As Blob and Pyro cry out for the villains to show themselves, a group of costumed individuals appears out of thin air, knocking out Avalanche and Pyro and announcing themselves to be Desert Sword. They all are of Arabic heritage and call themselves Sirocco, Arabian Knight, Aminedi the Invisible One, The Veil and Black Raazer. As Blob prepares to defend himself against the onslaught of them, Desert Sword warn him that the physicist Reinhold Kurtzmann is not worth dying for. He tries fighting them anyway and is brought to his knees just as Avalanche and Pyro get back in the battle, surprising Desert Sword and allowing Kurtzmann to fall back into the American team’s hands. Unfortunately, a fissure created by Avalanche separates the team, Crimson Commando and Avalanche being on one side, and the Blob, Pyro and the scientist on the other.

Crimson Commando orders the other group to get the scientist to the prearranged dust-off point, and while Avalanche carries him on an earthwave, he signals for the helicopter to extract them all. 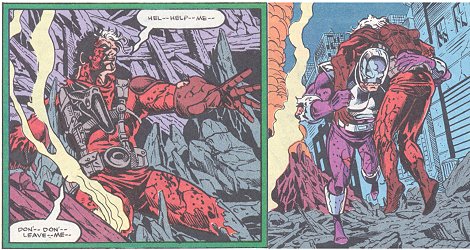 Unfortunately, Sirocco and Aminedi come after them and chase them into an area the Iraqis have rigged with mines. Both of them are caught in a massive explosion, brutally maiming Commando. Avalanche though is not seriously injured and manages to trap both pursuers beneath some debris. For an instant he hesitates, but then he picks up his more dead-than-alive teammate and carries him to the lift point, where they are met by a helicopter.

Meanwhile, the Blob and Pyro have troubles of their own, with Black Raazer, the Arabian Knight and the Veil coming after them. When Kurtzmann ends up in Iraqi hands once more, Pyro remembers their order to “Liberate or Terminate“ and burns him to death so that the Iraqi government can’t have him. Outnumbered and outclassed, Pyro and Blob are surrounded by Desert Sword, however no longer needing to hold back with his flame powers, 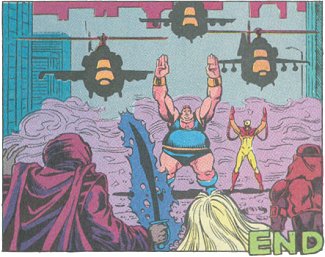 Pyro also kills The Veil to clear them an escape route. However, he and the Blob get lost in the backalleys and don’t make it to the lift-off point in time. They radio for an evacuation, but their request is denied with the Iraqi airforce closing in. Especially when he learns that they have killed the scientist, Avalanche gives order to take off and leave his former teammates behind. Surrounded by the remaining members of Desert Sword, and military troops closing in on them, Blob and Pyro have no option but to surrender to the enemy.