Xavier discovers that the Shadow King, the first mutant he ever fought, has grown extremely powerful and is causing waves of hatred all around the world. He uses Polaris as a nexus between the physical world and the astral plane and fuels his own power to near unlimited level with her absorbing the negative emotional energy. Xavier sends the X-Men to Muir Island but the residents who have already been taken over by the Shadow King defeat them. So Xavier has to call for help from his original students, X-Factor. Together they invade the island to find the Shadow King in a new host – Legion, Xavier’s illegitimate son. 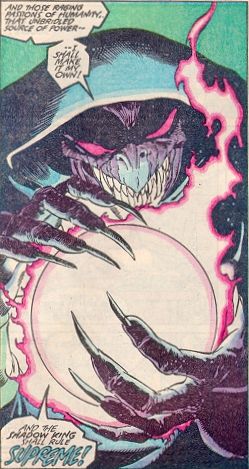 The Shadow King causes an increase of hatred all around the world and somehow uses this energy to fuel himself. The only force that could still stop him are Xavier and the X-Men so he plans to seduce the students to his side to injure Xavier where he hurts the most.

On Muir Island things are deteriorating. Moira has her residents' train against each other in some battle arena. Even new arrivals, Rogue and Lila Cheney’s bodyguard, Guido, are fighting there. Rogue defeats him and the crowd cheers, however she wonders what happens next. Not before long the Shadow King takes control of her too. Xavier sends the X-Men to check on Muir Island, while he heads to the remains of the mansion in Westchester to use Cerebro, wanting to identify the cause of the psychic static all over the world. On Muir, the X-Men are taken by surprise and defeated by the various residents who are all under the Shadow King’s control.

In Westchester, Xavier finds Stevie Hunter on the run from Colossus, who too is under mental control by the villain. Colossus chases Xavier and Stevie Hunter through the ruins of the Xavier Institute. It comes to a showdown between Xavier and the Shadow King in the Danger Room, and Xavier realizes that he can only free Colossus by destroying the artist Peter Nicholas personality in Colossus head; though it hurts him as Piotr actually was happy as an artist.

On Muir Island, only Forge remained free from the Shadow King’s influence and the other X-Men are hunting him. Yet Forge is able to use a neurosynaptic scrambler on Wolverine and when being discovered by Rogue, he knocks her unconscious with a gun. The Banshee too is freed from the Shadow King‘s control with Forge’s device and the four X-Men discuss what’s happening. Sean knows the extent of the Shadow King’s plan. He psionically causes world-wide waves of hatred and prejudice that will bundle in the form of Lorna Dane. Being a catalyst for negative emotions, she has been made his nexus between the physical and the astral plane, and he is getting stronger by the minute by adding the energy she absorbs to himself.

In Washington, Val Cooper and Xavier call in X-Factor for a rescue mission. They secretly approach Muir in a submarine, but aboard is also FBI agent Reisz, the Shadow King’s human host. When X-Factor invades the island, they are held in check by Legion, under the King’s control. On the submarine, Reisz starts to strangle Xavier, who pleads Val Cooper to help, yet she is under the King’s control too – or so he thought. She suddenly shapeshifts, revealing to be the believed killed Mystique and shoots Reisz, trapping the Shadow King on the astral plane. 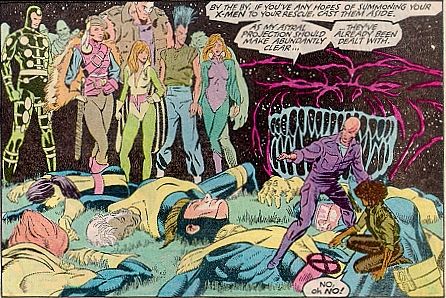 X-Factor and the free X-Men wonder how to free Lorna Dane from the nexus gate to prevent the Shadow King from acquiring a new host. Caught in the dilemma that separating Lorna from the device might kill her, they hesitate too long and the Shadow King takes over Legion as his next host, who then blows up the island with his vast telekinetic and pyrokinetic powers. Xavier inspects the ruins of Muir Island and finds X-Factor and the free X-Men held in a telekinetic field by Legion / Shadow King. The Professor and the Shadow King fight and Storm, who had remained hidden after her defeat by Legion, zaps him with a lightning bolt, causing him to lose control over the telekinetic field and retreat into the basement of the Muir complex.

Xavier and the free mutants come up with a plan to stop the Shadow King. Xavier will engage him on the astral plane, with Jean anchoring him and Storm, Cyclops, Colossus and Archangel shielding them from physical attacks, while Beast, Banshee, Iceman, Forge and Rogue will enter the lab complex to disrupt the Shadow King’s nexus. Xavier is not faring very well on the astral plane, as his astral injuries all show on his physical body too. First his legs are broken and he then suffers more injuries. The lab team has to fight the mutants still influenced by the Shadow King (Multiple Man, Syrin, Guido, Jubilee, Psylocke, Gambit, and Moira MacTaggert), and many personal issues hinder them, like Banshee having to go up against Moira and Syrin for example.

The team that is supposed to guard Xavier enters the astral plane too through Jean’s telepathy to help the Professor, yet this exposes him to physical danger in the form of Legion lurking around. The Shadow King now can destroy both Xavier’s mind and body, but before he fulfills his deed, Forge uses a neuro-synaptic weapon on Psylocke. While she is still dazed, he plunges her psychic blade into Polaris’ head, disrupting the Nexus and the Shadow King’s power source. The Shadow King vanishes, Legion falls into a coma and Xavier’s body is heavily damaged, but the X-Men are victorious.

Despite his own bad health, Xavier tries to wake up Legion, but after many mental probes Xavier accepts that he is unable to help his son. He returns from the astral plane to his physical body and is informed that his legs have been crushed, meaning he again will be confined to a wheelchair. With the original five X-Men returning, the X-Men now have fourteen members.

Mystique and Val Cooper explain how Mystique was not killed, but only replaced Val to fool the Shadow King. Mystique and Rogue reunite. Val thinks about restarting a governmental sanctioned team and asks Polaris, Multiple Man and Guido to join.