Amidst public debate on a proposed ballot initiative limiting reproduction rights of mutants, riots erupt throughout San Francisco, the home of the X-Men and their allies. As Cyclops fails to get the situation under control, Norman Osborn sends in his own team of Avengers to clean up the mess - as well as using the situation to debut his own team of X-Men - including his Cabal allies Emma Frost and the Sub-Mariner. In their first clash, several X-Men, including the Beast, are captured by Osborn’s forces and tortured using the “Omega Machine.” As the crisis escalates, Rogue and Gambit return to the X-Men and assist with riot control while the X-Club enacts Cyclops’ main plan, to raise a small landmass from the ocean floor, where all the X-Men are subsequently evacuated to as their new home: Utopia. Before long, Osborn, his Avengers and the remaining members of his X-Men launch an attack on Utopia, but the overwhelming forces of the X-Men manage to repel them, aided in no small part by Mirage, who returns re-empowered by Hela as a Valkyrie. In the aftermath, Cyclops opens up Utopia to all of mutantkind, while Osborn plans his revenge on those who betrayed him.

Simon Trask, leader of “Humanity Now!” marches with his followers through the streets of San Francisco, promoting the ballot initiative of Proposition X, which will legislate when and how mutants are allowed to breed. They are met with resistance as the Beast, Dazzler, Northstar and several of the X-Men students, along with their human supporters, attempt to peacefully protest against Humanity Now!’s march. Some X-Men students, including Hellion, however, aren’t interested in a peaceful protest, and a riot breaks out. During the commotion, the Beast is captured and taken into custody.

As the media has a field day reporting on these events, Cyclops and Emma Frost meet with the mayor of San Francisco. Cyclops takes no responsibility for the actions of those involved in the riot, telling Mayor Sinclair that he is not the president of mutantkind. 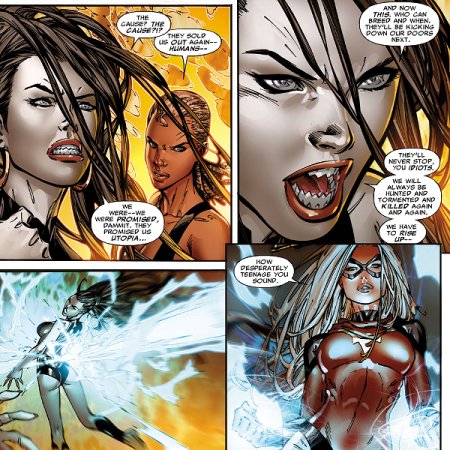 Nevertheless, she disagrees and tells Cyclops that he needs to be out there keeping people calm. In the meantime, Simon Trask meets with the media, while Norman Osborn arrives in San Francisco, announcing that the city is about to be federalized.

All over San Francisco, more riots involving mutants and their supporters against the Humanity Now! organization break out. Some of the X-Men and the students do what they can to quell the fighting, but even they cannot stop it all. Osborn knows that Cyclops can’t control the riots, and sends most of his own team of “Avengers” to San Francisco with orders to restrain and arrest any mutant breaking the law.

Osborn then meets with his fellow Cabal member, Emma Frost, and tells her that she has not been keeping up her side of the deal by keeping mutantkind quiet. He reveals to her that he has formed his own team of mutants to act as the face of law and order for mutantkind and that she is going to lead it. 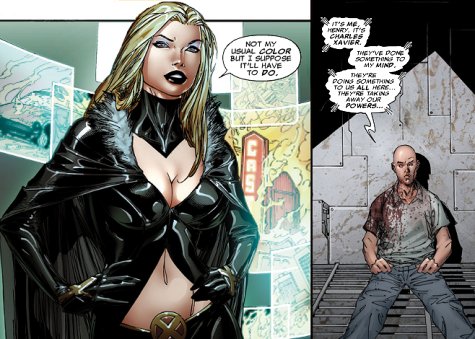 Emma agrees and dons a black costume he provides her with. Osborn holds a press conference and announces martial law in San Francisco, Oakland and Berkley, and that mutant ring leaders are being detained and kept off the streets. He also publicly declares Cyclops as a person of interest in the riots. A wheelchair-bound Professor X appears alongside Osborn and publicly distances himself and his work from the actions Cyclops has taken during the riots. At that moment, however, the real Professor X is actually imprisoned in Alcatraz in a cell next to the Beast, to whom Xavier reveals that something has been done to is mind and that their powers are being taken away.

Meanwhile, having been summoned by Cyclops, Rogue, Gambit and Danger arrive at San Francisco and are immediately assigned to damage control of the riot and to locate some missing students. After Gambit rescues Trance (as well as Dragoness and Toad, who have been battling HAMMER agents), Onyxx and the alien mutant Ariel (now affiliated with the X-Men) arrive to teleport them back to Graymalkin. Rogue and Gambit stay behind to continue their hunt. Rogue’s tracking of Indra leads to a fight with Moonstone, who is now operating under the identity of Rogue’s old foe, Ms. Marvel. Despite repeated fights with Moonstone, Rogue locates Indra and returns to Graymalkin, along with Gambit and Danger.

Elsewhere, Osborn introduces Emma to her new team of X-Men, at which point she learns that Mystique is posing as Charles Xavier. With the arrival of the Sub-Mariner, completing the team, Osborn holds another press conference in which he presents this new team of X-Men. Taking the mic, Emma announces a citywide curfew for mutants and humans alike is in effect.

Cyclops and the rest of the X-Men and students try to comprehend what Emma is up to with this new team of X-Men. Though they decide to obey Osborn‘s law for the time being, a small group of mutants are not in agreement. Hellion, Avalanche, Sunspot, Adam-X, Match, Lorelei and Meld get together and decide to get their message across in a way that is impossible for people to ignore. Their ensuing demonstration is immediately reported to Emma, who quickly teleports her X-Men there. In short order, Hellion’s group is contained and captured.

With Emma distracted, the sadistic Dark Beast, from the alternate reality called the Age of Apocalypse, continues to use his Omega Machine on is counterpart. Though intended to painlessly and harmlessly sap mutants of their powers, the machine is unrefined and in effect tortures its recipients, such as the Beast who has begun shedding his fur, as well as his very sanity.

Later, Cyclops arrives on Alcatraz to meet with Osborn, having decided that it is time they talked. To his surprise, Cyclops asks Osborn to surrender and withdraw from San Francisco, but Osborn points out Cyclops’ inability to calm the riots on his own and refuses to surrender. Cyclops departs, telling Osborn that he tried. That night, Osborn’s Avengers watch media footage of Osborn’s “X-Men” taking down the rioters and debate whether they should have been the ones to capture the mutants.

Soon, Emma returns to Alcatraz with her captured mutants and demands that they are not to be abused, mutilated or tortured. To convince her of their safety, Osborn and the Dark Beast take Emma to the holding cells. In one of these cells, Professor X senses Emma’s presence and telepathically contacts her, though she is in her diamond form and cannot respond. Unaware of this, Osborn explains that the mechanism of the Omega Machine simply limits a mutant’s powers. When Xavier tells Emma that is not the truth and that the Beast is dying, Emma demands to see the Beast. However, Osborn claims he isn’t there and uses holographic image inducers to hide both the Beast and the Professor.

Back at the hospital, its staff and patients have been infected by Simon Trask with a techno-virus that has turned them into human Sentinels, bent on killing as many mutants as they can. As they begin their rampage, Cyclops prepares his own troops for counter moves. He sends Danielle Moonstar to Las Vegas, orders Domino to assemble X-Force and meet with Wolverine, instructs Mindee of the Stepford Cuckoos to get arrested and tasks Psylocke to continue with what he already has her working on.

At Alcatraz, Emma collects her X-Men and teleports them to Northern Park, where Trask’s transformed followers have been causing chaos. With the media very much on this new team of X-Men, Emma’s priority is civilians. However, she soon learns that Trask’s followers are no longer human and orders the X-Men to take them down by whatever means necessary. As they complete their task, Emma’s X-Men are unaware that they are being observed by Cyclops and his squad of X-Men, intent on learning how the team operates. Though impressed by their performance, Cyclops notes that Osborn’s X-Men fight as individuals, whereas the proper X-Men fight as a team.

Meanwhile, Cyclops’ other plans proceed. As Mirage arrives in Las Vegas where she meets with Hela, Wolverine gathers Domino, Warpath and X-23 together with Magik, informing them that they are going to get their people back. Elsewhere, just off the Pacific Coast, deep under water, Psylocke and the X-Club are in a submarine making their way to a something lying on the ocean floor.

Over the course of a week, Emma and the “Dark X-Men” take down Trask and his followers, and begin a clean-up of the city. With Mystique still posing as Xavier, Osborn goes on a talk-show with Mayor Sinclair and “Professor X” continues to distance himself from Cyclops. At the same time, after seeing the Omega Machine in action, Cloak and Dagger question once again whether they should be with their team.

Later, while subjecting the Beast to another treatment of the Omega Machine, the Dark Beast learns that all the other mutant prisoners have been freed. 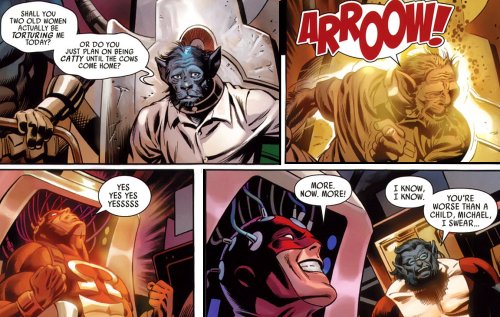 He discovers the reason is the telepath Mindee who had let herself be captured so that X-Force would know where to teleport to rescue them all. Quickly learning of their infiltration, Osborn sends the Dark X-Men to do battle. However, the conflict comes to an abrupt end as the Dark X-Men are betrayed from within as Namor and Emma switch sides. Victorious, Emma offers Cloak and Dagger the opportunity to leave with them.

Meanwhile, Psylocke and the X-Club report success in their underwater mission to Cylcops, who immediately orders them to “rise.” 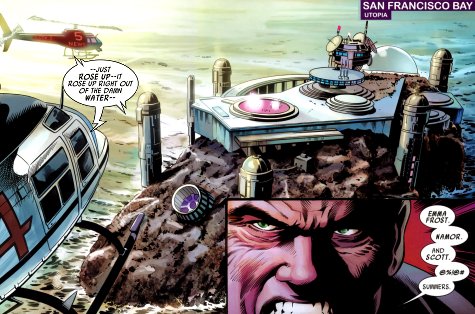 He then orders the remaining teleporters then to begin evacuating everyone from Graymalkin Industries. Their destination is a small landmass, in fact the remains of Asteroid M, now raised from the depths of the ocean. Still reeling from his betrayal, Osborn watches Cyclops’ televised announcement that they wish to live peacefully, warning that whatever happens next is beyond their control. Osborn agrees and orders his Avengers to bring him Namor’s head and Emma’s heart.

The next morning, Osborn and his forces launch their attack on the new island with his Avengers and the remaining members of his X-Men. They are met by Cyclops’ forces and past grudges are settled as Wolverine skewers Weapon Omega for killing Alpha Flight and the X-Club get revenge on the Dark Beast. 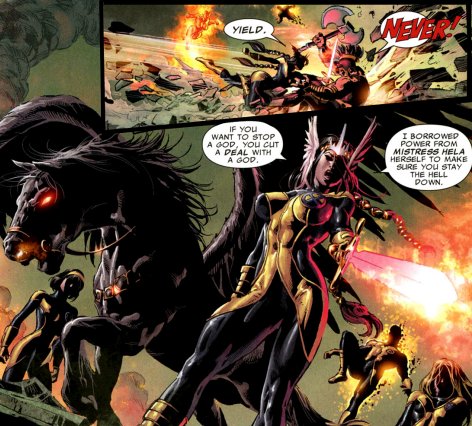 Likewise, Daken, Mimic, Venom, Bullseye and Moonstone are dealt with by various X-Men and students but the true threats are Osborn’s powerhouses, Ares and the Sentry. Though the Sub-Mariner is able to temporarily distract the Sentry, it is Emma, with help with Xavier, who enters the Sentry’s mind to locate his alter ego of Bob Reynolds and helps him take control of his mind. Though she succeeds in part, with the Void itself chasing the Sentry into space, in doing so Emma is unable to contain the Void completely and a sliver of it enters her mind. Osborn’s other powerhouse, the god of war Ares, is likewise checkmated by the arrival of Mirage. Having been sent by Cyclops to Hela, she has returned a full Valkyrie with powers enough to stop a god.

Though victorious in his own fight against Cyclops, Norman Osborn nevertheless finds himself and his remaining forces overwhelmed by the island’s mutant inhabitants, all of which declare themselves as X-Men. With the cameras of the media watching, Osborn orders his forces to fall back.

With Osborn and his forces gone, Cyclops delivers a televised address in which he vows that mutantkind shall now be free 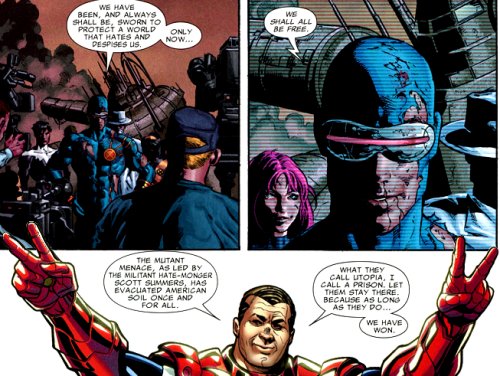 on this safe haven, where no mutant blood shall ever be spilled. Later, at his own press conference, Osborn saves face by spinning his defeat as a victory, announcing that the mutant menace has departed. He also boasts that this is only the beginning and what is coming next is going to change the world.