Dirty Politics a.k.a. If You Cannot Beat Them, Obliterate Them

While there are underground rumblings against the House of M, there were also ruling families who had ill wishes for Magnus, though politics made dealings tricky. Dr. Doom, ruler of New Latveria, leads a strike force for the House of M to deal with some of the more unruly super-powered beings. With his wife Valeria and son Kristoff, he created the Fearsome Four, giving them their own powers via science and magic. 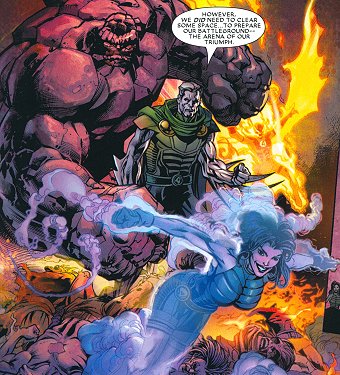 After realizing that mutants were the next stage of power, Doom used his magic and technology to create liquid body armor for himself. When his rival, Reed Richards, died in a cosmic experiment, he took into custody the only survivor, Ben Grimm, who was now horribly mutated into a rocky creature. Calling him “the It,” Doom made the weak-minded creature the final member of his group, as well as a pet to abuse.

However, Doom’s mother makes it clear to him that he is nothing more than a dog following Magnus’ orders. Frustrated with this idea, Doom hatches a devious plan. After creating a dimensional teleporting gate, the Fearsome Four travel through and kill all the sentient creatures they encounter, also realizing that in this world Magneto’s powers would not work the same, due to magic being superior there, and physics being altered. The Fearsome Four travel to Genosha, where they offer the gate as a gift, but after traveling through to show that it works, they attack Magneto and Quicksilver and leave them there to die. While Doom sends It to find and kill Polaris, he takes his new throne, but a fed-up It rebels against Doom and frees Magneto and Quicksilver. A battle quickly ensues and, in the process, Valeria and Kristoff are killed. Magneto also captures Doom’s mother, who disowns her son and sucks up to Magneto to save her own life. Magneto does not kill Doom, but cruelly sends him home alone to live out the rest of his miserable life. Meanwhile, the It escapes and is found by Alicia Masters, who takes him to join yet another resistance group. [Fantastic Four: House of M #1-3]

New Latveria is the least of Magneto’s worries, however. The continent of Africa, under the guidance of the Black Panther and Queen Ororo, has become an economic super-power that would soon surpass the House of M. Magneto becomes enraged at Ororo when she makes comments on 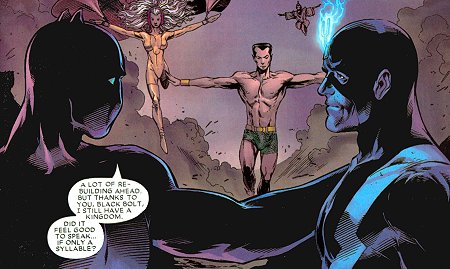 television that Magnus takes personally. Blaming the Black Panther for all of this, Magnus sends Sabretooth to kill him, since Quicksilver failed to break-up the Panther and Ororo. However, the Panther easily defeats Sabretooth and sends back the severed head to Magneto. Black Panther meets with the other free leaders left in the world and makes an alliance with Namor, Black Bolt and Sunfire. Magneto then contacts Apocalypse, who he knows plans on dethroning him, but still hires his services to dispose of the Black Panther. However, Apocalypse and his Horsemen are easily defeated by the Panther’s new alliance, and the political aggressions are temporarily halted. [Black Panther (4th series) #7]

Further from Genosha, more uprisings are in the making. Bruce Banner, who was run out of the United States because of his alter ego as the Hulk, 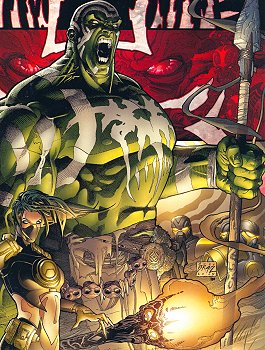 finds himself now living in Australia among the mutant Gateway and his Aborigine tribe. However, trouble starts when Exodus’ troops attack A.I.M., the last human resistance in Australia, which is helping humans escape the tyranny of mutants. Hulk aids A.I.M. and its leader, Monica Rappaccini, and dethrones Exodus with the help of Rappaccini’s daughter, Scorpion.

Australia becomes a safe haven for humans, but Scorpion and Banner quickly discover that refugees are mysteriously disappearing. After investigating, they discover that A.I.M. is transforming humans into a cyborg army to fight Magneto. Rappaccini realizes that she will be found out, so she frames others for the cyborg program. Hulk, unfortunately believing Rappaccini, kicks out A.I.M. and Scorpion from Australia, though allows Monica to stay to turn the cyborgs back human. Shortly, Magneto contacts the Hulk about letting Exodus return in exchange for being left alone, but the Hulk refuses and threatens to destroy Magneto if he interferes with Australia. [Incredible Hulk (3rd series) #83-86]

“Something is Rotten in the state of Denmark”

Though Wanda warped reality, it soon becomes clear that her changes are not perfect. Captain Genis-Vell of the Kree came to Earth as a diplomat to renew the Kree alliance with Earth. However, during a battle against the Thunderbolts, Vell encounters the man called Flashback. An accident occurs when the two battle, and Genis experiences visions of the world prior to Wanda’s change. The encounter leaves Genis hospitalized and, during that period, his human colleague, Major Erik Josten, takes a blood sample from him. Josten is actually part of the Human Resistance alongside Dum Dum Dugan and others, and wishes to use the sample to create a bio-agent to kill the Kree, create an alliance with the Shi’Ar and destroy mutant kind. After being released from the hospital, Genis tries to make sense out of his visions and decides to visit one of the men in his visions – Rick Jones. However, he discovers that Rick is dead. Genis’ powers go out of control, and both Kree and humans try to take him down. Josten commanders a special Sentinel secretly built for the Human Resistance, but it is destroyed and he escapes, realizing his secret plans will be revealed. Genis, however, is left in a coma. [New Thunderbolts #11]
Note: Genis apparently quickly recovers from his coma, as he is seen later on in Genosha.

However, the undoing of Wanda’s work begins aboard the S.H.I.E.L.D. Helicarrier. Wolverine, leader of the elite Red Guard unit, wakes up in bed with fellow agent, Mystique, except he remembers 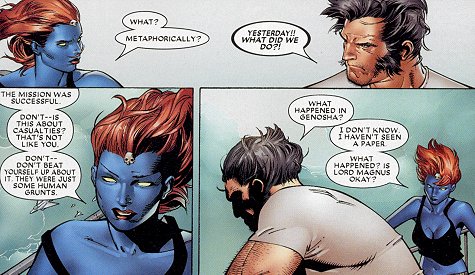 everything about his old life before the reality change, including memories that he never had access to before. Recalling the events on Genosha before the reality wave, Wolverine escapes from the S.H.I.E.L.D. Helicarrier and heads out to find his colleagues, though this initially proves difficult, as he has no way to find any of them. Unable to locate the X-Men or Xavier, and confused about Peter Parker’s new celebrity status, Wolverine heads to Stark Tower to contact Tony Stark. [House of M #3]

Confused and shocked at Wolverine’s actions, Director Sebastian Shaw calls in Mystique to question her on Wolverine’s recent behavior. 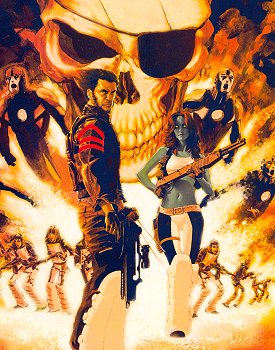 He brings up a recent mission Mystique and Wolverine were on in Mexico, attending a party at the House of M embassy. The party was attacked by rebels, who wanted to steal the Sentinel that was given to Mexico as a gift. However, Shaw has photographic evidence that suggests that Wolverine was a part of the attack and was working with the thought to be deceased Nick Fury, former leader of the Red Guard and Logan’s rival. Mystique admits that Wolverine disappeared from the hospital after the attack and, even though no clues pointed to Fury, he still hunted the man down. Finally, Mystique confesses to have tracked Wolverine down to a warehouse where Fury was, but Fury caused a blast and escaped. Shaw locks up Mystique but learns that, before the Mexico incident, she accessed Fury’s file. Shaw then confronts Mystique, who finally admits that it was all a stage – she set up the Mexico attack and posed as Fury in order to bring the passion of war back to Logan. Shaw, believing that Wolverine went rogue to find Fury, sends Mystique and the Red Guard after him. [Wolverine (3rd series) #33-35] 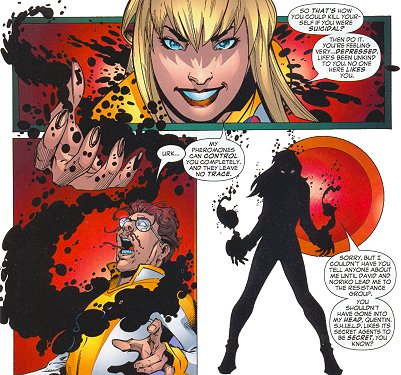 Meanwhile, the New Mutant Leadership Institute is attacked by Japanese human terrorists, but they are defeated by the New Mutant’s rivals, the Hellions, an elite S.H.I.E.L.D. training squad. Preoccupied with Wolverine, Mystique puts Moonstar and her Hellions in charge of taking down the terrorists, which is led by the father of the Hellion, Surge. Surge is pulled off the case because of this, so she contacts her boyfriend, Prodigy of the New Mutants, to help her. He convinces his teammates to help, but no one realizes that New Mutant Wallflower and her father, Sean Garrison, are actually secret S.H.I.E.L.D. agents. Wallflower kills Quentin Quire to protect her and her father’s secret when he discovers it. The Hellions discover that the terrorists are after Emperor Sunfire’s Project: Genesis to destroy it, but the leader refuses to admit what the project truly is. 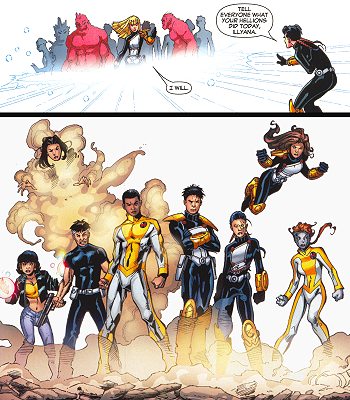 The New Mutants find the human terrorists, but Wallflower betrays them and calls in the Hellions. The groups discover that Project: Genesis actually is a process to transform humans into mutants, with fatal results, and it was partially designed by Sean Garrison. Simultaneously, Karma and Cypher of the New Mutants discover Sean Garrison’s duplicitous role, but kill him before he kills them. The two groups in Japan team up to destroy the project, but Wallflower uses her powers to force them all to fight each other. The mutants eventually kill Wallflower, but not before some of their own perish. Emperor Sunfire arrives to stop the kids, but the Hellions and New Mutants battle him in order to give Magik time to teleport the human subjects away and reveal Project: Genesis to the world. [New X-Men: Academy X #16-19]