The House of M is a Marvel event unlike any other in recent time. The comic industry received much criticism in the past for large crossovers that required readers to buy titles they don’t normally collect, just to be able to understand the full story. Not only that, the sheer number of continuations and tie-ins often caused continuity errors. With the House of M, Marvel decided to take a new approach to their traditional crossovers, treating it more like an event rather than crossover.

Following the success of Marvel’s prelude storyline of Avengers Disassembled in the pages of Avengers, House of M copies the event idea, with the main story occurring in only one title; in this case the House of M limited series. This series is a self contained story that doesn’t need any other tie-ins to make sense. Of course, there are still many tie-in stories. However, Marvel’s many tie-ins are also stand alone, expanding upon elements from the main series, but the exact details of the House of M limited is not necessary to understand or read any of the tie-ins. Still, if readers opt to, they can collect all the House of M labeled titles, thus creating a richer and bigger story. Even better, writers who did not want to participate in the crossover didn’t have to, and could continue telling their own stories without interference.

During the House of M event, Astonishing X-Men (3rd series) was on a temporary hiatus, with its cast starring in the main House of M series. The only core X-Men titles to take place in the event are Uncanny X-Men #462-465 and New X-Men (2nd series) #16-19. The hit title District X and Excalibur (3rd series) were also put on hiatus and District X was replaced with a limited series called Mutopia X. Other X-Titles to participate in the event are Wolverine (3rd series) #33-35, Exiles #69-71 and Cable/Deadpool #17.

New Avengers was not involved in the crossover, as its cast was heavily involved in the main House of M series. Other Marvel Universe titles involved include Captain America (6th series) #10, Black Panther (4th series) #7, New Thunderbolts #11, Incredible Hulk (3rd series) #83-86 and The Pulse #10. The epilogue of the story was told in Decimation: House of M – The Day After, which not only wrapped up the House of M storyline, but kicked off the aftermath event in the X-Titles known simply as “Decimation.” 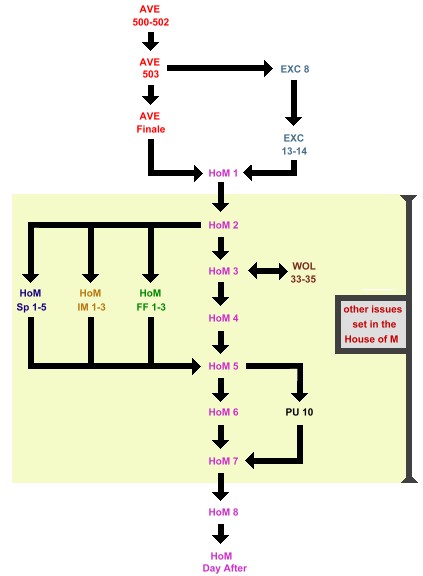 Since the tie-ins are independent of one another and only expand upon certain story elements in the House of M main title, creating a suggested reading order would not only be unnecessary, but impossible, as there is little evidence to say where certain titles occur in continuity. However, certain characters that have tie-ins are also important in the main story. The following are suggestions on where to place certain tie-ins: