Written By:
Peter Luzifer.
Last Updated:
28th March 2004
Introduction
The alternate reality called “Professor W’s X-Men“ was first depicted in the X-Men Millennial Visions 2000 One-Shot. The whole issue was about various comic book writers and artists depicting what kind of concept they would try out in the X-universe, were they given free reign. Some used the most popular X-Men in new scenarios, others created alternate reality and future settings, while others tried out new characters in the One-Shot and its successor, X-Men Millennial Visions 2001. The idea behind Millennial Visions was to see which ideas were popular enough among the audience and make further use of them. While several individual characters have received that treatment, so far only one entire scenario has managed to make it into Marvel’s official canon as a whole. What Jim Calafiore created, back then under the title “Professor W’s X-Men,“ is an alternate timeline set about 20 years in the future. It’s the native reality of Exiles member Nocturne and it has been revisited and mentioned in the dimension-hopping team’s book several times.
Chronology
(all information taken from Exiles #1, 4, 41-42,
X-Men Millennial Visions 2000 & 2001)

Little is unknown about the past of this timeline or at what point it branched off from the main Marvel Universe. Xavier’s school for mutants is harboring quite many mutants, some of them serving as the X-Men, others considered still too young and only staying there to be trained in the use of their powers. Over the years, some of the X-Men married, others retired and quit the team, some former team members were killed and others joined.

Nightcrawler got together with the Avengers’ Scarlet Witch, the two of them finding they had quite a lot in common, as both of them have been raised by gypsies. They had a daughter, whom they named Talia Josephine Wagner, whom most people would call “T.J.“ She stayed at the school and was raised and trained by the X-Men, calling them uncles and aunts. Not only had T.J. inherited her father’s looks and agility, but she also manifested some powers of her own, like the ability to enter and take over other bodies for up to 12 hours (a full lunar cycle), earning her the codename Nocturne. Besides this, she possesses limited telepathy and can release "hex-bolts" from her hands, actually them consist of energy from the dimension that Nightcrawler teleports through.

In order to save his sister, Illyana, Colossus sacrificed his own life and his soul merged with the demonic dimension of Limbo, leaving his organic steel body an empty husk. Shadowcat remained with the X-Men and, over the years, she become more skilled and capable in the use of her powers. Getting older and more mature, she stopped calling herself Kitty, going by Kate instead.

At some point, the Shadow King mentally possessed Wolverine and caused him to enter a berserker rage, killing Professor Xavier. In the moment of his death, Xavier created a telepathic backlash that left Logan crippled beyond his healing factor’s ability to remedy. Though not fully paralyzed, Logan could only walk with the help of two crutches. While most X-Men forgave him, as the incident was not really his fault, Logan was driven by guilt and decided to lead the X-Men in Xavier’s stead, devoting his own life to the dead man’s dream. Nightcrawler acts as the team’s field leader, partially to oversee his daughter’s training, who chose Nocturne as her codename.

Only Cyclops, Xavier’s most loyal student, found it not within him to forgive Wolverine and, when his lover, Jean Grey, later died under yet unrevealed circumstances, Scott finally snapped and quit the team to lead a new Brotherhood. 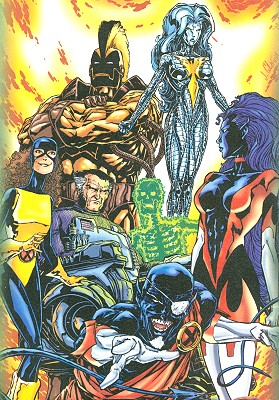 In Plague, the final solution to the Legacy Virus was found. Discovered traveling with an evangelical troupe as its “healer,“ Plague exhibited an ability to draw the illness of others into himself and then expunge the disease from his own system. Boosting that power, he absorbed the entire Legacy Virus and wiped the contagion from the face of the Earth. Unfortunately, unable to release the sickness, he became the living embodiment of the Legacy Virus, appearing as nothing more than a glowing skeleton. Moira MacTaggert tried to find a cure for him, to no avail.

Around that time, the X-Men were somewhat understaffed, other than Shadowcat, Nightcrawler and Nocturne, there only being Thunderbird, aka James Proudstar, brother of the late John Proudstar. It was quite a blessing when the Phoenix Force decided to return to Earth, claiming Colossus‘ empty body for itself, molding it into the form of a woman. The Force never explained why it remained with the X-Men, though it seemed to want to learn from their emotions, sometimes entering the dreams of Logan and the others.

It was this team of five that were called to battle against Apocalypse and his son, Armageddon, who was created artificially through the joining of Apocalypse and the genetic material of Jean Grey. Harvested moments after Jean’s death, he was born to be his father’s ultimate weapon. However, Armageddon did not share his father’s views and openly opposed him, siding with the X-Men instead. Despite this unexpected help, there was still one of Apocalypse’s dangerous devices, a so-called Chronal Disruptor, to deal with. Phoenix being trapped in a power dampener, it was decided that Kate was best suited for the task by phasing through and short-circuiting the machine. Unfortunately, the machine exploded with Kate inside. When the X-Men checked the debris for their friend, they found a very young Kitty Pryde instead, one who had been plucked from the past, just days after she first enrolled at Xavier’s School for Gifted Youngsters.

Over the next days, Nocturne tried to help Kitty fit in, it being kind of troubling for her to lose everyone she knew and loved and instead be faced with these changed versions of her friends, who all seemed to expect more of her than she believed capable of. When Nightcrawler pushed Nocturne too much in a training session, father and daughter had a fall-out, her being furious of him always trying to shape her in his own image. Leaving the mansion to let off steam with her band, the Butt Monkey, T.J. was accompanied by Kitty. Later that day, it was the young girl who re-inspired Nocturne’s believe in the X-Men’s dream and they headed back to the mansion, only to find it under attack.

In their absence, Cyclops had returned with a vengeance and brought along his new friends among the Brotherhood – 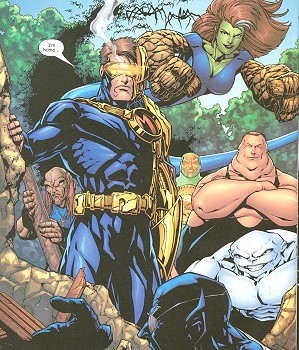 Rogue, who had permanently absorbed the Super-Skrull, the Blob, White Dwarf, the Beast (not Hank McCoy), the Radioactive Man and Hive. During the battle between the two factions, there were casualties among both groups. After infecting Hive with a lethal disease, Plague was killed by Cyclops, who thought of this act more of a mercy-kill, considering Plague’s status. Armageddon ripped open the Radioactive Man’s containment suit, apparently dispersing him. More and more combatants being knocked out, it came down to a confrontation between Cyclops and Wolverine, who refused to fight his former friend. Nocturne was too far away to intervene directly, so she possessed the unconscious Armageddon to use his telekinetic ability for popping Logan’s claws in Cyclops‘ chest, stopping him before he could kill.

In the aftermath of the battle, Nocturne and Nightcrawler made up with each other, the later promising to accept her as her own, individual person. In the following weeks, they got along well, not even Nocturne’s fling with her teammate, James Proudstar, getting in the way. However, around that time, Nocturne became unhinged from time, caused by a defect in the timestream. She found herself forced to join the reality-hopping Exiles to fix several other realities, where to some events have gone wrong in some alternate timelines. Her only hope is to eventually restore her personal chain of events so that she can be sent back home.

The ripple in the timestream changed Professor W’s X-Men to such a degree that Nocturne's father, Nightcrawler, was killed during a fight with the Hellfire Club at the hands of Mystique. Nocturne’s only hope is to restore her personal chain of events, thus eventually fixing the timeline and being sent back home. If she fails or dies along the way, though, Professor W’s X-Men will remain in the altered state.

Character Origins
Most of the X-Men all stem from the aforementioned Millennial Visions 2000 One-Shot, only Thunderbird, aka James Proudstar was retroactively added. Nocturne first mentioned James already in Exiles #1.

With the Brotherhood members, it’s more complicated. Three of them are from Millennial Visions 2000 too, but each from a different scenario. Super-Skrull Rogue is from an alternate reality idea shown on the book’s cover, though it doesn’t have any explaining text with it. The Beast if from a concept called “X-Punks“ and White Dwarf from “Project Cerebro-X.“

Due to the success of X-Men Millennial Visions, there was a second issue in 2001, in which not only Hive and Cyclops do appear, but also the idea stems from to have these specific characters in a grouping together. Once more the creator being Jim Calafiore, he thought up a future version of the Exiles, which was printed as “Static Problematic.“ Besides Blink, who was still leading the team and rather frustrated by seeing other members being leaving and new ones joining for years, the group had Cyclops of “Professor W’s X-Men,“ Super Skrull Rogue, White Dwarf, the Beast and Hive, each from their respective scenario.

Of course, the characters histories are somewhat rewritten now, all of them now originating from the reality called “Professor W’s X-Men“ but at least you have some insight in the creative process at Marvel Comics.