Description
Anchorage in Alaska is the state‘s largest city with a population of over 200,000 people and a large Oil Industry. It has also played an important part in the X-Men Universe as it was here that Cyclops met his first wife Madelyne Pryor and it is also the home of Scott and Alex's grandparents who owned a Freight Airline company. Since first visiting, Cyclops has used Anchorage as both a refuge and a home when he retired with his wife from the X-Men.

Anchorage related plots
On arrival in Anchorage Airport, Scott and Alex, with their father Chris Summers (Corsair) to meet their grandparents were greeted by charter pilot Madelyne Pryor, who was working for the grandparents‘ airline at the time. All three Summers noticed how much she looked like Jean Grey. [Uncanny X-Men #168]

After weeks of working together Madelyne and Scott had a first date at the Reindeer Falls hotel. Things started to get serious between them so Scott decided to tell her about Jean and their uncanny resemblance. Although they had doubts about where the relationship may go because of this, they still decided to try. Later Scott told her of him being a mutant and demonstrated his power. [Uncanny X-Men #170]

When Madelyne woke up from a nightmare, she told Scott about the plane crash she walked away from as sole survivor. Strangely, it happened on the exact date as Phoenix sacrificed herself on the moon and Scott visited his grandparent‘s Airline company to check their records about Madelyne, but Alex confronted him and told him that he should not ask too many questions and enjoy their relationship. [Uncanny X-Men #171-172]

On board a flight to Anchorage, Scott and Madelyne decided to get engaged. Later that night Scott asked Madelyne if she was Phoenix reborn, to which she angrily punches him out. Upon recovering, Scott found himself confronted by Dark Phoenix. However it turned out that this was caused by Mastermind‘s illusions, and soon the couple got married. [Uncanny X-Men #174-175]

Some weeks later, Scott received a phone call from Moira MacTaggert who was concerned about Xavier condition and recent happening's at the mansion. Cyclops decided that he had to return to the mansion. He tried to sneak out of the bedroom, but Madelyne woke up. She was not happy that Scott was leaving her, but she understood his concerns. However she reminded him that they made a promise to each other when they married that his responsibilities were now to his family. [Uncanny X-Men #197] 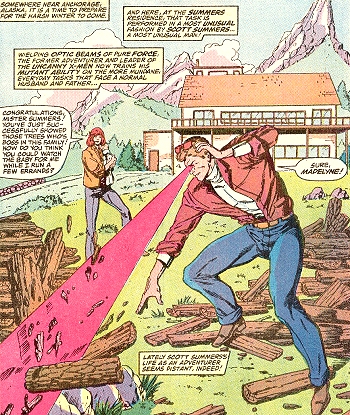 After losing X-Men leadership to Storm (Uncanny X-Men #201), Cyclops retired from the X-Men and he returned with Madelyne and their son Christopher Nathan to Anchorage to live there for the rest of their lives. However a rift had started forming between Scott and Madelyne. Scott felt responsible for mutants in the world whereas Madelyne thought he should look after his other responsibilities namely her and their son. Just then, Scott was informed by the Angel that Jean Grey was discovered alive and well. He told Madelyne he had to leave for New York, to which she answered that if he left her again he shouldn’t even bother to come back. Scott left anyway. [X-Factor #1]

On returning to Anchorage Cyclops found his home up for sale while Madelyne and his son were gone. Desperately trying to find out where they had moved to, he visited Wilson Realty company (who were selling the house), his grandparents‘ Airplane Company (although it the meantime it had been sold to a new owner), the hospital and the library only to find no information on them having ever existed. He returned to the house and angrily starts firing optic blasts until he found a rattle that was stuck behind a radiator, evidence that indeed Madelyne and the baby had been real. [X-Factor #13]

After completely destroying the house, Cyclops was arrested. On the way to the police station though, they were attacked by Master Mold who recognized Cyclops as one of the Twelve. After running into an oil refinery Cyclops, who considered sacrificing his own life, was able to stop Master Mold by tricking it into firing on some storage tanks, thus blowing itself up. [X-Factor #14]

During Inferno, Maddie revealed that Sinister bought the grandparents‘ Airline and that he had ordered his Marauders to kill her, though she barely escaped. He was also responsible for deleting all evidence of her existence because of the unexpected reappearance of Jean Grey. A meeting between the two would have exposed Madelyne as a clone. [X-Factor #38]

Having a lot on his mind (Psylocke’s flirtation and the events of the X-Cutioner’s Song) Scott took some time off and visited his grandparents in Anchorage. He told them the truth about Madelyne and how he had been forced to sacrifice his only child as he was dying of a strange virus. The boy‘s only chance was to send him to the future. Phillip and Deborah felt sad for Scott and comforted him. A neighbor showed up, his name being Mike Milbury. He asked for help with a fallen tree that was blocking the street. Later when Scott showed up to help, he found that it was Mr. Sinister, and the only tree he had interest in was the Summers family tree. [X-Men (2nd series) #21-22]

Cyclops started a fight with Sinister, but the villain did not want to battle. Actually he warned about the Legacy Virus that Stryfe had unleashed and also hinted about another brother besides Scott and Alex. Later that day, Scott was attacked by the Dark Riders, out to kill anyone who was not fit enough to survive. After fifteen minutes of battle, Scott passed their test and they teleported away. [X-Men (2nd series) #23]

Despite slowly losing his eyesight, Phillip Summers wanted to once more fly a plane himself, but he crashed down. In the cold wilderness he was found by Adam X, the X-Treme, who kept the old man alive. When Scott and Jean arrived in Anchorage, Phillip was already at a hospital. Jean realized that Adam was still in the building, so she thanked him and linked the minds of him and Phillip, who enjoyed seeing his memories of soaring through the universe in a spaceship. [X-Men (2nd series) #39]

When Scott needed to recover from having had a nanotech-bomb surgically removed from his gut, the Summers couple decided to retire and settle down in Anchorage. During their flight to Alaska, they befriended Chris and Staci Miller, who were from Anchorage too. [Uncanny X-Men #352]

Arriving at their new home, Cyclops and Phoenix found their cabin covered with snow drifts. Much to Scott’s surprise, Jean was able to clear the snow easily with her telekinesis; from above the shape of the cleared area resembled a giant bird image. In the following days, Scott practiced focusing his eye-beams. Jean came in, and shocked her husband by wearing the green Phoenix costume. She explained that she no longer wanted to suppress her abilities out of fear of becoming corrupted by power like Dark Phoenix. From now on she would explore and empower herself, and the costume represented both focus and a symbolic rebirth. [Uncanny X-Men #353-355]

Scott was not convinced though, and asked Warren, Bobby, and Hank to visit them. After they arrived, Scott told Hank that he thought Jean might be turning into Dark Phoenix. The original X-Men discussed things until a big bird clogged the chimney. As they went to dinner, Inuits were holding a riot in the streets. Scott stated that maybe the Xavier’s dream should be reconsidered as suddenly crows began to fill the sky. Each of the X-Men did their own part in defeating the horde of birds, and they split up to find the reason for the crows‘ odd behavior. Cyclops eventually released a powerful optic blast that destroyed them all, though the true reason remained a mystery. Iceman still believed that a strange Indian guy caused the bird’s madness, Beast suspected pollutants, and Phoenix discovered a mechanical crow amidst the other birds. [Uncanny X-Men #356-357]

The original X-Men were packing up to go back to New York when Jean experienced a psychic attack and went catatonic.( the outcome of Psi-War left telepaths worldwide temporarily without powers). This cut short any plans the group had on reconsidering Xavier’s dream. Later, Jean got a check-up by Michael Twoyoungmen, Alpha Flight’s Shaman. Her psi-powers were gone, and Scott tried to comfort her as good as he could. [Uncanny X-Men #358-359]

When Nate Grey was haunted by nightmares about the Age of Apocalypse, He pinpoints the source to a mountain in Alaska and asked Jean and Scott to back him up while investigating. They climbed the mountain and found its top merged with a seawall power plant, trying to teleport in more and more soldiers from the AoA. Together they were able to shut down the plant and closed the rift to the alternate reality. [X-Man #53-54]

After their adventure, Scott, Jean and Nate were spending some downtime, but soon discovered an old man and a boy in need of help. They took them to their cabin, but actually the strangers were the guardians of the M’Kraan Crystal. They registered the dimensional rift and thought Nate responsible. After a brief battle though, they saw the truth that X-Man was able to use his powers responsibly and they left. With Nate’s costume torn, Scott gave him the outfit he wore as part of X-Factor. Right after Nate left, Jean and Scott received a phone call from Ororo; they were needed back with the X-Men. [X-Man #55]