Over the years, there have been several orbital facilities built by Magneto and named Asteroid M. 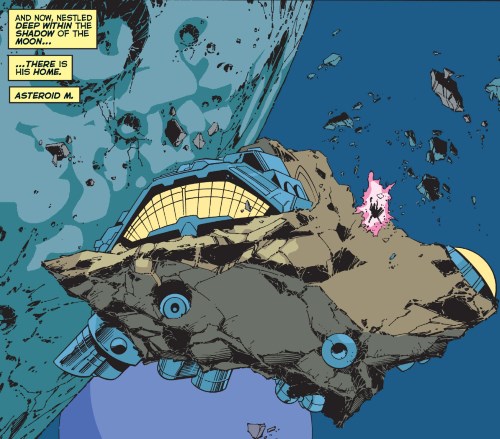 Each was designed to be a base of operations for Magneto’s Brotherhood of Evil Mutants and, on occasion, even as a refuge for the would-be despot. It also seems that the need for an orbital facility, rather than a ground-based one, was as much psychological in nature over being above the lowly, Earth-bound humans that mutants that we would dominate. Each time the orbital base was severely damaged or destroyed, the master of magnetism would rebuilt and further improve Asteroid M.

As well as being an ominous orbital fortress, Asteroid M served as a sanctum and refuge for its master. Among its facilities it included:

A decorated office, filled with a brimming bookcase. It also sported a spectacular view of the Earth below. A pleasant place to sit and plot its domination while enjoying a nice read from the library.A 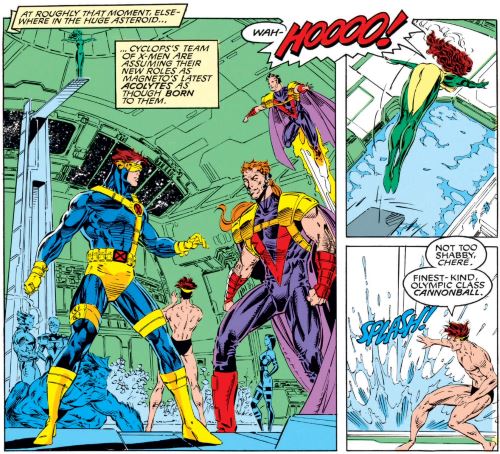 sophisticated laboratory of technology-advanced gadgetry. From this location, Magneto could study the wonders of the universe, though he would discard any discovery that did not assist him in his goal of mutant supremacy. Living quarters for at least a dozen people, along with the necessary bath – and restrooms, training rooms and a large in-door pool. 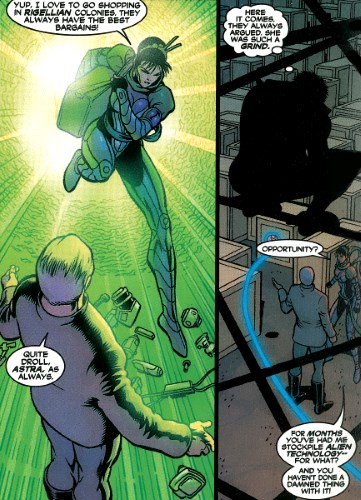 While it is apparent that Magneto constructed the first Asteroid M facility, it is unclear exactly how he did so. Already possessing a first class mind, much of the design seemed to have originated from his own intellect. However, it is quite possible that much of the technology used therein was of alien design, purchased or purloined by Magneto’s first recruit – the Israeli mutant called Astra. For months, he had instructed her to purchase or steal technology from across the cosmos. However, they soon parted ways when it became clear to her that Magneto was not interested in gaining wealth, but furthering his “mutant cause,” a cause which she did not share. [X-Men Forever #4]

Whatever technology or pieces he used, Magneto constructed the actual facility on his own. High above the planet and hidden from prying eyes of the human world below, he used his powers to literally construct it with his own hands. Its location would be kept hidden from ground-based radar and satellite sensors by an array of sophisticated electronic hardware far superior to anything used by the Russians or NASA.

In this secluded location, he would gather the recruits for his Brotherhood of Evil Mutants, such as Quicksilver and the Scarlet Witch, who were quite in awe of the massive space station. [X-Men (2nd series) #minus 1] 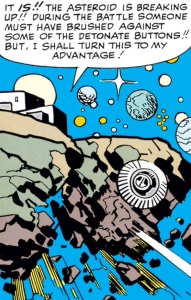 The first time that Magneto actually used his orbital fortress was almost his last. Using it as a base of operations for his Brotherhood of Evil Mutants, Magneto laid a trap for the X-Men, but only succeeded in capturing the Angel. In turn, the X-Men had captured the Toad and then used his signaling device to summon a craft from the Brotherhood’s base to take them to Asteroid M. After a brief battle, a self-destruction protocol was accidentally activated and the asteroid fortress began to break into pieces. The main section of the station, however, broke free of its orbit of Earth and floated further into space. [X-Men (1st series) #5]

Over the next several years, Magneto focused his powers and attention on other matters, each of which were rebuffed by either the X-Men, Avengers, Defenders or others of Earth’s heroes. As a result of these taxes on his powers, Magneto did not have the 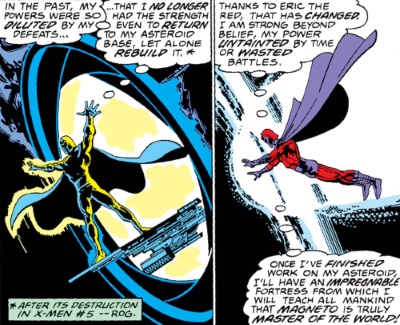 strength to return to his asteroid base, let alone rebuild it. However, in the months prior to his capture of the X-Men, Magneto had taken the time to do just that. While he did not use it to imprison the X-Men, instead using his Antarctic facility, he did use the newly rebuilt Asteroid M as his primary headquarters. [X-Men (1st series) #112-113]

Over the next several months, Magneto continued to use secondary bases, rather than Asteroid M, from which to launch his schemes. One such example was when he utilized the enigmatic Bermuda Triangle island to blackmail the leaders of the world into submission. [Uncanny X-Men (1st series) #148-150] 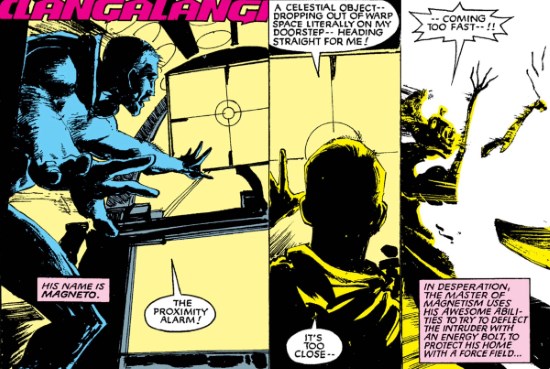 After being foiled by the X-Men, Magneto once again returned to Asteroid M. However, his stay there was short-lived. Fleeing from his father, the technarch alien known as Warlock emerged into Earth space too close to Asteroid M and impacted with it, destroying it. Magneto barely escaped with his life. [New Mutants (1st series) #21]

Though Asteroid M was destroyed, it was not obliterated. Pieces of it survived and rained down into the atmosphere around the globe. Months later, small pieces fell in a small town in Ohio, while a larger piece crashed in Kampuchea, Cambodia. Learning of this via the CIA, the KGB leaked the information to the media, luring Magneto to the area in hopes of capture. There, both the Avengers and the Soviet Super-Soldiers attempted to arrest him. With the help of the X-Men, Magneto escaped custody of both the Avengers and the Soviet Super-Soldiers and located the central core of Asteroid M, which had crashed in a lake. After recovering a few items, he used explosives to destroy the remainder of the facility. [X-Men vs. Avengers #2]