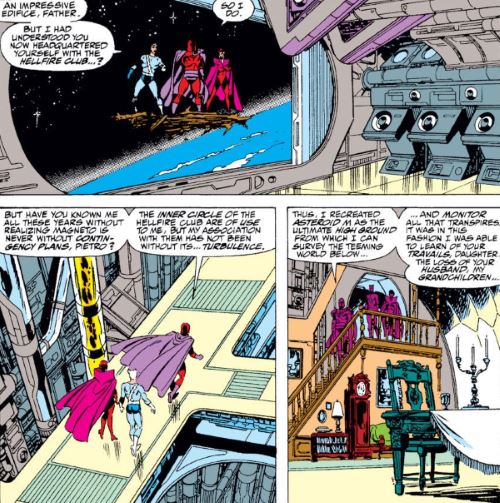 Some time in the next several years, Magneto evidently began construction of a new facility. This was first seen during a time of great emotional stress for his daughter, the Scarlet Witch, leading to her first major emotional breakdown. Along with her brother, Quicksilver, Magneto brought the “dark” Scarlet Witch to Asteroid M, with the west coast team of Avengers in pursuit. However, upon their arrival, the Avengers were defeated and repelled. [Avengers West Coast #57]

Though driven back, the Avengers did not give up. A short time later, Quicksilver revealed to 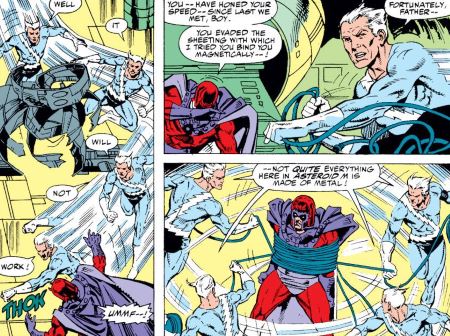 Magneto and his sister that he was still working for the Avengers. Using Lockjaw, who had been temporarily shrunken by Dr. Pym’s “Pym particles,” Quicksilver teleported the group back to Earth, where the Avengers were waiting for them. Though Wanda was recovered by the Avenges, Magneto escaped – though in the process leaving the Avengers once again to wonder if he had perished. [Avengers West Coast #60]

After this, Magneto seemed to turn his back on the world, including both Xavier’s and his own dream for mutants. However, his solitude on Asteroid M was interrupted by the arrival of Fabian Cortez and the so-called Acolytes, who plead with him to return to a more active role. So convinced, Magneto retrieved the nuclear missiles from the sunken Soviet nuclear submarine Leningrad [from Uncanny X-Men (1st series) #150] to use as weapons of deterrence, his own version of nuclear balance of power. Shortly afterwards, he declared to Cyclops’ squad of X-Men that Asteroid M was a sovereign world and safe haven for mutants.

Together with his Acolytes, Magneto was more than a match for the one squad X-Men. Once victorious, Magneto and his followers took their defeated foes back to Asteroid M as prisoners. Later, when Fabien Cortez informed Magneto of his discovery that Magneto’s DNA had been altered, Magneto realized that the culprit must have been Moira MacTaggert during the time he had been reduced in age to infancy. Kidnapping she and Xavier, Magneto brought them to Asteroid M as well. After her admission of her actions, Magneto used Moira’s technique on the captured X-Men, making them loyal servants to his cause. [X-Men (2nd series) #1-2] 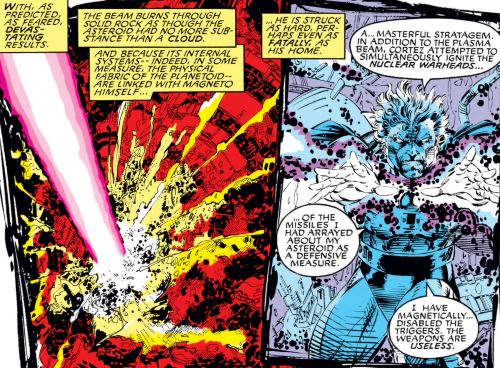 Refusing to give up, the second squad of X-Men, led by Storm and designated “Gold Team,” snuck aboard Asteroid M. When Cyclops’ squad was sent against their teammates, the orders contradicted their instincts, breaking them free of their brainwashing. This demonstrated to Magneto that Moira’s conditioning had never affected his long-term judgment. In the chaos of the battle, however, Fabian Cortez made his escape, intending to eliminate both the X-Men and Magneto, wishing to use Magneto’s martyrdom for his own goals of personal power. Firing a plasma canon at the station, Cortez’s blow caused Asteroid M to break apart and fall to Earth. The X-Men escaped, but Magneto refused to depart, remaining behind with his loyal Acolytes and apparently perishing. [X-Men (2nd series) #3] 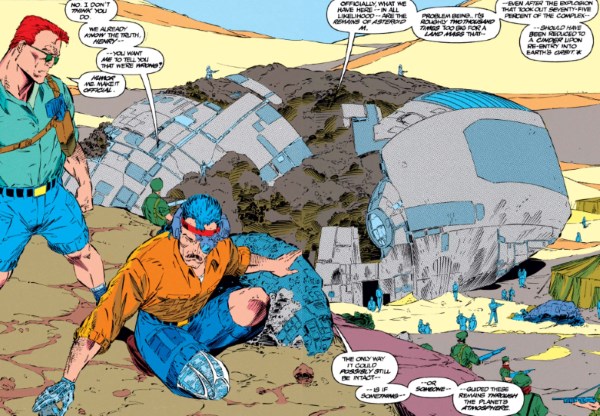 The world would later learn that Magneto survived. However, their first clue was when the mutant inventor known as Forge and Peter Gyrich discovered that a large portion of Asteroid M survived the explosion in space and had crashed in the desert of Kuwait. Though the remains of his Acolytes were among the wreckage, Magneto’s body, however, was nowhere to be found. [Uncanny X-Men (1st series) #299] 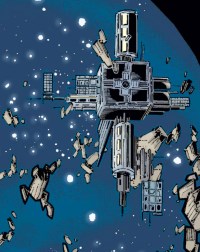 Driven to learn more about their lives as part of the Weapons Plus program, Fantomex and Wolverine enlisted the aid of Cyclops in their investigation. After discovering the Weapon Plus facility in the England, the trio released the mysterious Weapon Fifteen and then followed it to the nerve center of the Weapon Plus operation, which was a space station in Earth orbit. Once onboard, the trio met resistance both in Weapon Plus soldiers, and in Weapon Fifteen. After availing himself of their accessed database, Wolverine had the last laugh, activating a self-destruct mechanism, destroying the facility. [New X-Men (1st series) #143-145] 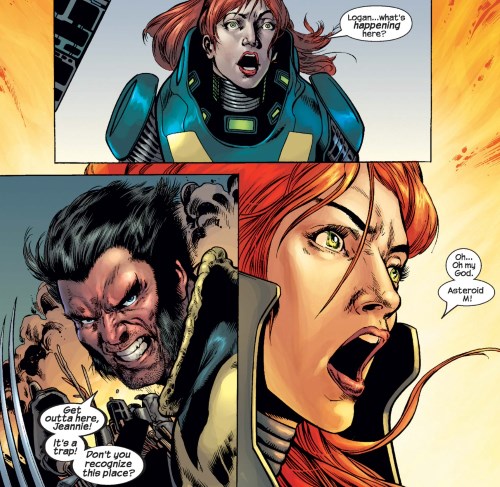 Cyclops and Fantomex escaped in an acquired spacecraft, however Wolverine was left behind. As Cyclops and Fantomex had to emergency land, due to damage from the explosion, Wolverine needed rescuing by Jean in an X-plane. Upon arrival, Jean was informed by Wolverine what he had already deduced – that the Weapons Plus facility was actually Asteroid M. Jean and Wolverine spent the next several days on the station, as it was drawn into the sun’s gravity well. Eventually, they escape by way of Jean unintentionally surrendering to the Phoenix Force, though the remains of Asteroid M were vaporized as it plunged into the sun. [New X-Men (1st series) #146, 148]

As the two previous Asteroid M facilities were both destroyed long ago and fell to the Earth, it is unclear exactly which facility the Weapons Plus program acquired and rebuilt. However, since Wolverine seems to recognize it, the station must have been built on a fragment of the second station, as Wolverine never stepped foot on the first one. Further, it seems that the timing of Wolverine and Jean discovering a piece of Asteroid M, just as Magneto is revealing that he has been masquerading as Xorn, is a coincidence. The goals of Weapon Plus would seem to be at odds with those of Magneto, no matter which stage of his life. The subsequent retcon of “Kuan-Yin” Xorn would seem to further cement this.

Later on, when the X-Men had moved to San Francisco, the main part of the first Asteroid M was 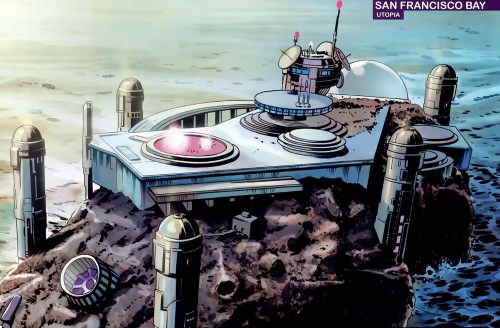 used as a base of operations for the team. Having discovered it off the coast of the city they re-floated it and moved to the new island, dubbing it "Utopia". Whilst it had been underwater a number of years the main structures had remained intact and were quickly made livable. The X-Men used Utopia for a few years, even going as far as declaring it its own nation. Soon enough, schisms within the X-Men as well as severe damage to the island meant it was abandoned once more. Utopia didn't sink beneath the waves though as it soon found life again as New Tian.

While it seems that over the next several years Magneto has not moved to build a third Asteroid M facility, he did acquire another space station which served the same purpose. Once thought destroyed, the space station belonging to the time-traveling Cable – once known as Graymalkin – was discovered by Magneto some months after the destruction of Asteroid M. Using Shi’ar technology he obtained during his tenure as a member of the X-Men and headmaster to Xavier School for Gifted Youngsters, Magneto rebuilt the remnant of Graymalkin, renaming it Avalon. Eventually, however, Avalon was destroyed, just like Magneto’s two previous asteroid stations.

Recently, a new Asteroid M has been seen as Magneto's base of operations. Whether this is a re-purposed older facility or a brand new one remains to be seen.