Genosha is a small island near the east African coast, not too far away from Madagascar. Only two major cities have appeared in comic books, namely Carrion Cove and the capital city, Hammer Bay, which is located at the large bay facing towards the coast of Madagascar.

Unlike it‘s African neighbors, Genosha bloomed and blossomed, and was one of the richest and most advanced nations worldwide. It was later discovered that the progress of Genosha was built on the backs of so called mutates. 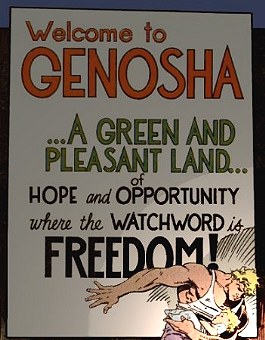 Genosha had tested their citizens for mutant genes, and those found to be positive were stripped of all rights and forced to serve the state as slaves. The State utilized their abilities to economically and financially improve the country.

Upon learning this, the X-Men opposed the Genoshan government and finally the dark secret was exposed to the world. Afterwards, the island was ravaged by racial wars, until the U.N. granted Magneto control of Genosha. Despite unrest from some of the human populace, Magneto attempted to rebuild Genosha into a thriving safe haven for mutants. However, this was not meant to last and, after an attack by a new breed of Sentinels, the country was decimated, becoming a wasteland with only a handful of the 16 million population surviving.