With Jean apparently dead, Scott moved on with his life as best he could. Things took an unexpected turn for him when he soon met a woman named Madelyne Pryor, who seemed to be the spitting image of Jean. Scott soon fell in love and married Madelyne and the two soon had a child together. Together they moved away from the X-Men to live away from the superhero life in Alaska. 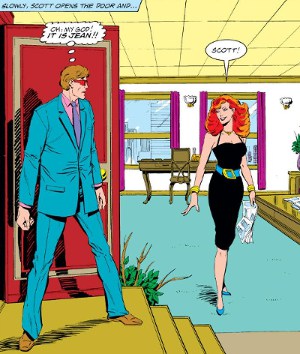 Scott's chance at a simple life was abruptly eneded when the Avengers soon after discovered Jean's cocoon at the bottom of Jamaica Bay and turned it over to the Fantastic Four. It was Mister Fantastic who eventually freed the very much living Jean from her slumber and who then informed her only publicly known teammate, Warren Worthington, that she was alive. Warren in turn alerted the rest of the original X-Men, including Scott, who didn’t believe his eyes at seeing Jean alive. Deeply conflicted about his marriage to Madelyne, Scott's love for Jean was too strong and he abandoned his wife and child to joined the newly formed X-Factor. [X-Factor (1st series) #1]

Though the five friends worked together well, Jean felt sure that the others were keeping something from her. After Scott slipped up and called her Maddie, Jean pressed the truth out of the Beast, Angel and Iceman, learning of Madelyne and Scott's marriage to her during the time she was believed dead. [X-Factor (1st series) #7]

During one of their missions, Jean confronted Scott about it and he showed her a picture of his wife and baby. Jean told him that his place was with his family and he should search them out. [X-Factor (1st series) #8] However, when Cyclops later traveled to Alaska, he found Madelyne and the baby missing, bizarrely leaving no trace of where they went or even any trace of their existence. 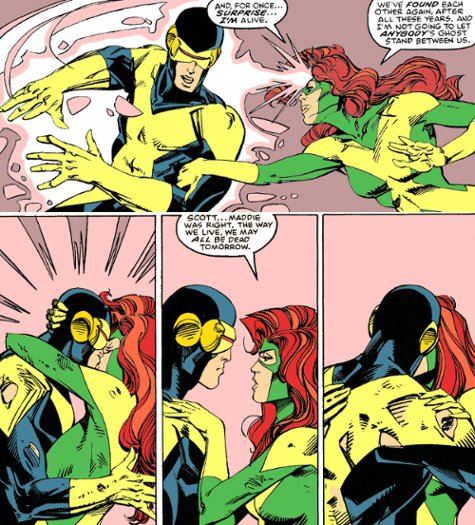 Slowly Jean and Scott's relationship was building again. However, when Madelyne was seen dying on national TV among the X-Men, Jean renewed the relationship with Scott. She felt that Madelyne's death proved that anyone’s time is limited, especially for mutants and superheroes, so she and Scott should not waste any time by avoiding each other.[X-Factor (1st series) #25]

However the X-Men and Maddie were not dead and had relocated to the Australia Outback, where they operated secretly. From there, Madelyne learned of Jean Grey being alive and slowly manipulated the X-Men in a quest for revenge. Additionally, the increasing unstable Madelyne bargained with demons from Limbo and, during the events of Inferno which partially erupted from that bargain, she and Jean Grey confronted each other. In the end, Madelyne chose to die and tried to drag Jean along with her into death via a telepathic bond. The only way for Jean to survive was to integrate the memories and psyches of both Madelyne and Phoenix into her mind.[X-Factor (1st series) #38] 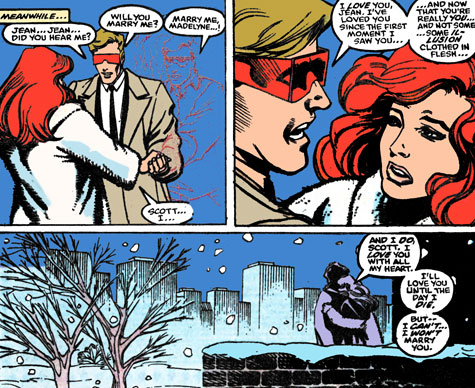 When later Scott proposed to Jean, she was haunted by the memories of him proposing to both Phoenix and Madelyne before. She was afraid and felt that everyone took them getting married for granted. To defend her right to make her own decisions, Jean turned Scott down. [X-Factor (1st series) #53]

Cyclops understood Jean's reasons and they continued like before. In time, X-Factor rejoined the X-Men, after which Jean and Scott ended up on different strikeforces, though kept seeing each other while at the mansion. However, not before long, an unexpected circumstance put the couple to the test. Psylocke, part of Cyclops' Blue team, started to flirt heavily with him, and it seemed not to matter to her at all that Jean noticed what was going on. [X-Men (2nd series) #8, 20]

Troubled by the events of the X-Cutioner’s Song and Psylocke’s flirtation, Scott took a short leave of absence to visit his grandparents. After returning, he promised to Jean to never again leave her out of his decisions.[X-Men (2nd series) #24] 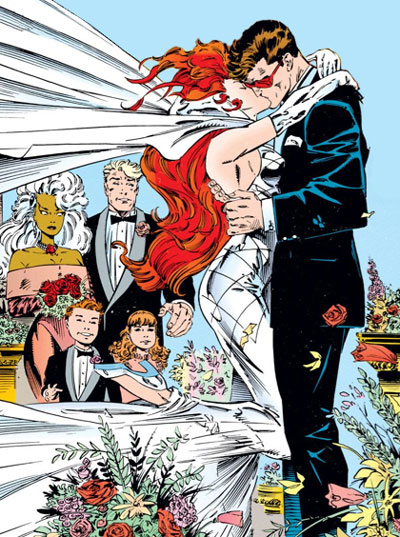 They made up and, a short while afterwards, Jean decided that it was finally time to tie the knot. All of a sudden, with Scott not expecting it at all, she asked him to marry her and he happily agreed. [Uncanny X-Men (1st series) #308]

Almost anybody who belonged to an X-team attended the wedding, which was held on the Xavier estate grounds. Ororo and Alex were the witnesses to the marriage. Rachel Summers, their time-displaced daughter from the future, was especially happy, as the wedding seemed like a first step towards a future where she could possibly born as their daughter. [X-Men (2nd series) #30]

During their honeymoon, the happy couple were whisked away to the future by Mother Askani, an aged Rachel from a point in her future. She had transported the consciousness of Scott and Jean into prepared host bodies and, posing as Redd and Slym Dayspring, they raised Cyclops son Nathan Christopher for about twelve years. When their mission was over, the two were returned to their bodies to the exact moment they had left. [Adventures of Cyclops & Phoenix #1-4] 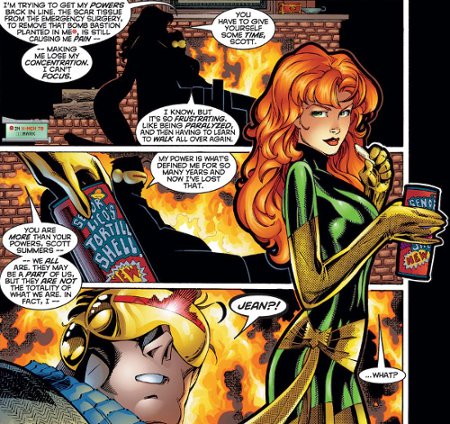 Jean and Scott returned to the X-Men and were the backbones of the team until, during the events of Operation : Zero Tolerance, Bastion planted a nanotech bomb in Cyclops' stomach. Though it was removed in a delicate operation, Cyclops was too weak to stay an active member, so the Summers couple retired and moved to Anchorage, Alaska. To the growing concerns of her husband, Jean's abilities seemed to have increased in strength in recent weeks and she also started to wear the Phoenix costume. [Uncanny X-Men (1st series) #354] Scott feared that Jean was about to be corrupted by her own power, but all worries were cut short when she temporarily lost her powers as an after effect of the Psi-War. 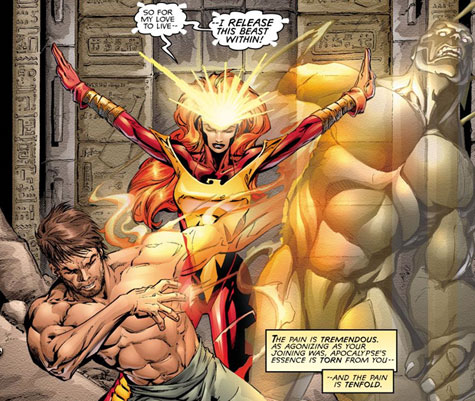 In time, both had recovered and were called back to the X-Men in a time of need.  It turned out that they both were on the list of the fabled "Twelve" and, along their fellow X-Men, they traveled to Egypt to confront Apocalypse. In the end, Scott sacrificed himself to free Nate Grey, his son from an alternate dimension, and he was merged with Apocalypse into one being and fled.

Believing Cyclops dead, the X-Men returned home and Jean left the team to mourn her loss. By the time Jean returned six months later, more and more hints of Scott still being alive had begun to surface. Together with Cable, Jean embarked on a quest to find her husband. When they finally did so, they discovered him apparently fighting with Apocalypse for dominance over their body. Using her powers, Jean telepathically tore out Apocalypse’s essence, which was then destroyed by Cable’s psimitar, saving Scott and ending Apocalypse. [X-Men : Search For Cyclops #1-4]

Jean should have been happy to have her husband back, but the experience didn’t leave Scott unchanged. He was noticibly darker and edgier than before, placing their marriage under additional strain . [New X-Men (1st series) #114, 118]

Further complications arose in their relationship when Jean showed signs of the Phoenix Force returning. Already concerned with his own internal darkness leftover from his merger with Apocalypse, Scott also worried about that of his wife. 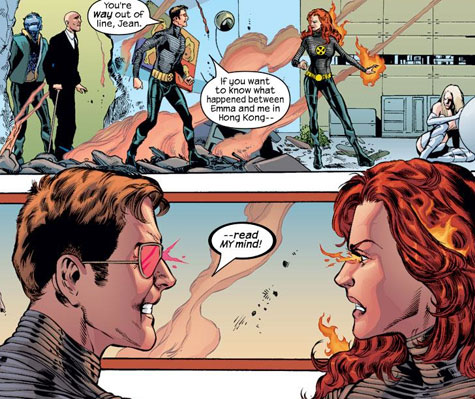 Scott eventually turned to Emma Frost as someone to confide in, which soon turned into a telepathic affair carried out on a psychic plane. After several illicit mental liaisons, Jean interrupted the pair, leading to a violent confrontation between the two women. [New X-Men (1st series) #128-139]

Scott interrupted the women’s fight and had Jean read his mind to show that nothing physical had happened between the two.  He then left the mansion and quit the X-men, wallowing in self pity for a while in a Hellfire Club strip club . [New X-Men (1st series) #139, 142]

When Scott and Jean reunited, it was brief and tragic. While he had been away, the X-Man called Xorn posed as Magneto and declared war on humanity, devastating the X-Men in the process. 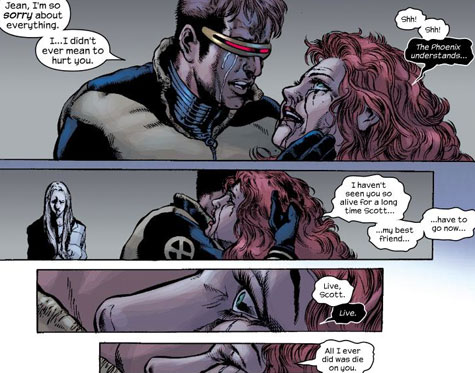 Reuniting the X-Men, Cyclops told Emma he had now decided between her and Jean, though he didn't get a chance to tell Jean what his choice was. Jean coaxed “Magneto” into removing his Xorn helmet, allowing Xavier to infiltrate his mind and defeat him. The faux Magneto's final act as he was being beaten was to kill Jean. As she died in his arms, she urged Scott to live on without her. Furious at his actions, Wolverine immediately decapitated "Magneto" in response, but it was too late to save the life of the woman both Scott and Logan loved. [New X-Men (1st series) #146-150]

Guilt-ridden over Jean’s death, Scott initially turned down Emma’s offer to reopen the school and start a relationship with her. However, as the Phoenix, Jean influenced Scott from the White Hot Room, a realm of the Pheonix beyond death, into accepting the offer so he could move on with his life. [New X-Men (1st series) #146-150]

Even though Jean had died, her memory still came back to haunt Scott on several occasions. When a weakened Phoenix returned to Earth, it visited Jean’s grave and brought her back from the dead. Fearing she would again become the Dark Phoenix, the X-Men telepathically reminded her how loved she was and convinced her to stand down. The strategy worked and Jean and the Phoenix returned to the White Hot Room, leaving Scott and Emma free of the Phoenix. [X-Men: Phoenix – Endsong #1-5]

Much later, the conflict between mutants and humans had led Cyclops to go down a dark path. In the hopes of showing his former friend the error of his ways, Beast traveled into the past to a time earlier in their careers and brought the original five X-Men back to the present. The contemporary, adult Scott was shocked to face a version of the girl he had fallen in love with and married. After a time, he and the young Jean had a heart-to-heart. Over the course of their conversation, Jean subtly made advances to the adult Scott, but he immediately turned her down, firmly telling her nothing could ever happen between them. [All-New X-Men (1st series) #26]

With the nature of the Phoenix, it’s likely Jean won’t stay dead forever. Whether she and Scott will reunite remains to be seen but their love has endured the dangerous life of superheroes, love triangles, possession and even death.