When Grant Morrison took over the job as writer for X-Men (2nd series) - [which he promptly renamed “New X-Men”], he stated his intention to do the “ultimate Magneto story.” Quite a boast for a writer tackling the X-Men’s oldest and most tenacious foe. What made the boast even more curious was that, within two issues of his run, Morrison had apparently killed off Magneto. 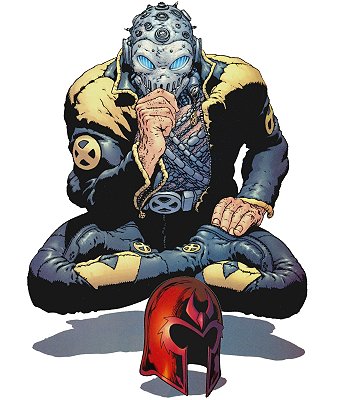 Nothing Morrison wrote over the next two years seemed to indicate that this latest turn for the character was anything but permanent. The “ultimate” Magneto story seemed to be about the beliefs of Magneto being carried on by a new generation of mutant malcontents. However, in a reversal which few readers saw coming, it transpired that the enigmatic mutant known as Xorn, who had just recently joined the X-Men, was in fact Magneto, playing possibly the most intricate Trojan Horse gambit in history.

Though caught completely off-guard, the X-Men nevertheless triumphed - and once again Magneto was apparently killed, this time by the adamantium claws of Wolverine, through decapitation. The ultimate Magneto story was meant to be just that: the ultimate one. The last.

However, it seems that, no matter the finality, there is no permanent death for a good villain. Plans were quickly made by the Powers That Be at Marvel editorial and, five months later, the very much alive Magneto appeared in Genosha. Apparently, the Magneto who had been disguised as “Xorn” was actually someone else, not the real deal. It was later revealed that not only was that person really named Xorn… but he had a brother, also named Xorn.

This article will attempt to make sense of this storyline and do so in different parts, each with a different point of view. The first section will be a purely factual narrative, depicting Xorn from his first appearance to the apparent revelation of his true identity, as Morrison had intended. The second section will show the clues Morrison had left along the way to this unmasking. The third section will be dedicated to the retcon, with the fourth and final section attempting to reconcile it all.