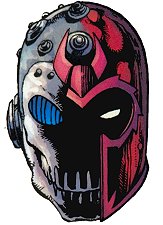 In the world of the Internet, keeping a secret is rather difficult. One person posting a spoiler in the right Forum and the whole world knows about it that afternoon. Perhaps it is because of this that so large a reaction was created by fans about the revelation of Xorn being Magneto - because they had all been so successfully snookered. Now, readers who had been following the story all along could go back and review all of the extremely subtle clues that Morrison had been leaving all along.

The biggest disappointment from fans did not seem to be the cheating of the recent rule from Marvel editorial of “no more resurrections” - since it seemed rather obvious that Magneto had died during the Mega-Sentinel attack on Genosha - but because so many fans had found Xorn to be such an interesting character. While the revelation was an interesting twist, many found it sad that the character would not be seen again.

Three things came of the end of the Magneto/Xorn story in New X-Men (1st series) #150. First, was the death of Magneto: a classic character undeniably killed. Second, Magneto had done something so horrible - the murder of over 5,000 New Yorkers. For a character that had straddled the line between “good” and “evil” for years, this action irrevocably made him unredeemable. Third and lastly, it eliminated a new character - Xorn - whom many people, including staff at Marvel - had liked.

The revelation that Xorn had been a real person and had only masqueraded as the real Magneto fixed the first two problems. [Excalibur (1st series) #1-2] If it had been someone else, then there was no problem trying to explain his return to life (he had simply never died!) and there would be no need for any acts of redemption. He had simply not committed the crime.

The third problem, the lack of a new character of Xorn, was fixed by simply revealing that the original character - who had committed the attacks on New York - had a twin brother! Definitely worthy of a daytime soap opera.

Apparently, Marvel readers did not feel the same way.

The almost callous, half-attempt at the explanations of the retcons were not very well received. It had been extremely clear that Morrison had intended for Xorn to have been Magneto and that he was to have been killed, a fact that he has perpetuated in interviews on the subject. While Morrison’s run on New X-Men had not been universally appreciated by all X-Men fans, the attempt at Marvel to make drastic changes for no other reason than they felt like it, combined with a lack of clear explanation, seemed like a deus ex machina at its worst. Marvel quickly moved to distance itself from the whole fiasco.

This became rather clear in Excalibur (2nd series), where the whole question of the imposter had been dropped quite quickly and never mentioned again.

In X-Men (2nd series), Shen Xorn had been introduced at the end of #157 and had been taken in by the X-Men in #160. Shen Xorn’s explanation of his brother’s situation occurred in #162 - and two issues later in #164 Shen Xorn was written out of the X-Men title altogether. Having possibly killed members of the murderous Brotherhood of Mutants, Shen Xorn decided that he needed time alone and departed the X-Men to meditate.

Months later, it was revealed indirectly (via SHIELD viewscreen) that Shen Xorn had been depowered during the M-Day phenomenon that removed the X-gene from millions of mutants, transforming them into humans. SHIELD sensors had been identifying different powers within the Collective, evidently identifying Shen Xorn’s energy signature. [New Avengers #18]

The last nail in the coffin for Xorn could very well have been two issues later, with New Avengers #20. In this issue, the story of the Collective entity - comprised of all of the energies of the de-powered mutants - confessed to the real Magneto that the consciousness in charge of the Collective was the original Xorn, who had attacked Manhattan in his name. In the end of that story, it seemed that the Collective, as well as Xorn, was killed when the Sentry hurled it into the Sun.

It seemed that the story of Xorn was now over.

However, continuity-minded fans were still not willing to give up the ghost on the story yet. They pointed out that the original “Kuan-Yin Xorn” had been killed long before M-Day. Therefore, it was impossible that his consciousness was among the mutant energies orbiting the Earth, later becoming the entity that the Avengers named the Collective.

In an evident attempt to bury the issue once and for all, Joe Quesada stated in a Newsarama interview that:

“Kuan-Yen Xorn and Shen Xorn were twin brothers from China, both mutants, one with the power of a star in his head, one the power of a black hole. Kuan-Yen Xorn came under the influence of as-yet-to-be-revealed entity that forced him to assume the identity of Magneto, battle the X-Men and destroy Manhattan. He was subsequently killed by Wolverine near the end of that battle, in the Planet X storyline. Soon thereafter, his twin brother Shen surfaced and briefly joined the X-Men. This Xorn brother was de-powered during M-Day. Because Xorn's powers were psychokinetic, and his personality was so strong, it basically remained an almost disembodied sentient thing among the big ball of mutant energy. When that energy got sucked down to Earth by Michael and all absorbed by him, Xorn was the dominant personality in the mix, and that's what drove him towards Genosha and Magneto.”

Though there are still several oddities and minor plot-holes, love it or hate it, this seems to be the final resolution to the infamous “Xorneto” dangler.

In many ways, the confusion of the retcon for Xorn seems to be similar to that of the Phoenix. Originally, it was quite a simple and straightforward story. However, when X-Men fans and writers began considering ways to bring back an interesting character that was clearly dead, a story was written stating that everything we knew before just wasn’t as we believed. In the aftermath, chaos ensued. However, unlike the Phoenix story, the Xorn story seems to be one that Marvel has lost interest in telling and has quietly backed away from advancing.

It should also be noticed that none of the explanations of Shen Xorn or Kuan-Yin Xorn explain how Magneto survived the attack of Cassandra Nova’s Mega-Sentinels, or address the issue of his “last will and testament” being magnetically recorded on a black box as he lay dying. [New X-Men (1st series) #132]

Nevertheless, Brian Michael Bendis, architect of the House of M and M-Day storylines, gave Marvel an “out” when trying to explain both Magneto’s apparent death and the whole debacle that is the Xorn story. In House of M #7, Doctor Strange visited the Scarlet Witch -

who was playing with her re-created sons in her re-created “House of M” reality. There, Strange asked her, point-blank, whether she had re-created her father after his recent reported death.

Wanda seemed not to understand his question, or at least had no interest in doing so. It is also clear that she was not in the best of mental health at the time. Nevertheless, with a mutant close to Magneto (being his daughter) and having reality-altering powers, it is not difficult to imagine anything outside of the realm of possibility. Just as well, it could be said, as it seems the mystery that are the brothers Xorn is unlikely to be revisited anytime soon in the world of the X-Men.