Xorn first appeared in the New X-Men Annual 2001, which was published only four months into Morrison’s run. At the time, Xorn was apparently a Chinese national, who had first manifested his powers some fifty years before, just as he had reached puberty. He had then been imprisoned in a military facility, as the government had decided that he might one day be turned into a doomsday soldier in some future conflict with enemies of the Republic.

According to his jailer, Ao Jun, a member of the Chinese military, Xorn had escaped once in 1969 and, after two weeks of being free, had been recaptured. 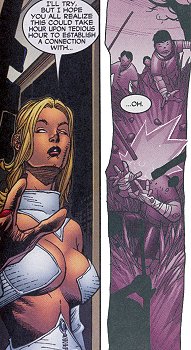 As punishment, the new facility had been built on where he fell, using fragments of the original. Ao Jun himself had been punished by him being made Xorn’s permanent jailer. Now, years later, Ao Jun intended to make a profit by selling pieces of Xorn’s body to John Sublime and his U-Men, who wished to graft his body parts on others, making them more than human, though not quite mutant. They would be a third species.

As it happened - seemingly coincidentally - the death of a member of X-Corporation in Hong Kong had led Cyclops, Beast, Wolverine and new X-Men member, Emma Frost, to the island to investigate. Through their research, they discovered John Sublime’s mutant organ harvesting operation, as well as a set of keys to a cold war internment camp. Cyclops asked Emma to telepathically scan the keys, hoping to find more information about them via any psychic imprint. Though she thought that it might take hours, Emma obtained an immediate connection with Xorn, to whose prison the keys evidently fit. Much of what the X-Men were led to believe about Xorn’s life comes from this seemingly fluke bit of luck. From this, the X-Men learned that he was being held in a facility called Feng Tu, which was named after the mythical capital city of Hell. Finding the facility in the province of Ningxia Hui, the X-Men discovered that Ao Jun had apparently betrayed Sublime and the U-Men. 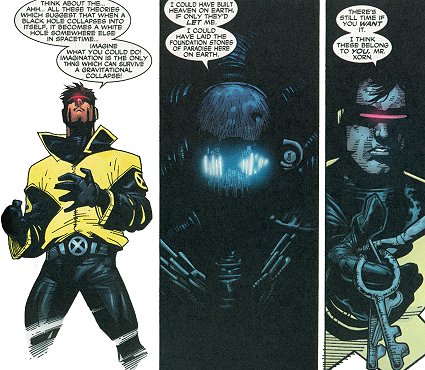 When they removed the helmet from what was once Xorn’s head, they unleashed a micro-black hole. It was Ao Jun’s apparent hope that, once unleashed, the star/black hole would destroy Beijing and all who had exiled him to a life that he had hated. At the same time, Xorn - after a lifetime of imprisonment - wished to die, not caring if he consumed mainland China in the process. After Ao Jun’s death at the hands of a betrayed U-Man, Cyclops appealed to Xorn’s sense of self-purpose. He explained that his old life was over and that he could use his powers to make the world a better and safer place. Apparently convinced, Xorn powered down and accepted Cyclops’ offer of a job with the X-Men.

Though he had agreed to take a job with the X-Men, Xorn did not do so immediately. Instead, he retired to a monastery in China and worked with his apparent powers of healing. It was this new ability which led Cyclops to once again track down Xorn. Recently, the mind of Professor Xavier had been transposed into the body of his twin sister, Cassandra Nova, which in turn had been infected 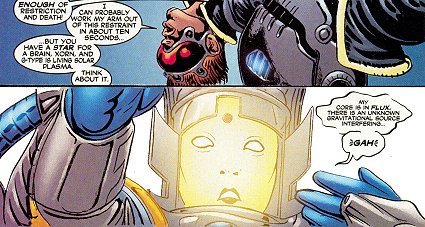 with a host of pathogens. It was Cyclops’ hope that Xorn’s healing powers could be what saved Cassandra’s body, and therefore Xavier’s mind. [New X-Men (1st series) #122]

Before they could return, however, they were attacked and captured by the Shi’ar Imperial Superguardians, who had been sent by a brainwashed Lilandra Neramani. The source of Lilandra’s brainwashing, the maniacal Cassandra Nova (now in the body of Xavier) had intended to wipe out the X-Men. However, the Superguardians were unaware of Xorn’s powers, which apparently included controlling gravity. [New X-Men (1st series) #123-124]

Escaping the Shi’ar superdestroyer, Cyclops and Xorn transported to the Xavier Institute via a Shi’ar transit stream. Arriving too late to save Cassandra’s body, Xorn used his powers of healing to cure the X-Men’s infections, which turned out to be not biological at all, but microscopic nano-sentinels. A short while later, after Cassandra had been defeated and Xavier’s mind returned to his own body, Xorn healed Xavier as well, apparently healing his crushed spine and returning his ability to walk. [New X-Men (1st series) #126]

In keeping with the X-Men’s duties as doubling as teachers as well as heroes, Xorn was assigned a class. However, rather than a 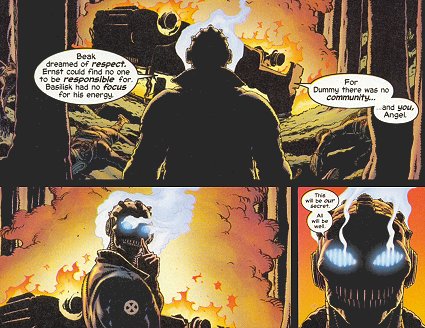 regular “subject,” Xorn was assigned a “special class.” This was comprised of students with varying levels of dysfunction, though mainly relating with social interaction issues. It seems that Xavier felt that Xorn’s outlook on life - rooted in Eastern philosophy - would be of use to the group. However, one night when he took his class camping, the Institute was attacked by the U-Men. Luckily for the class, the U-Men were no match for Xorn’s powers - though it seemed that he used them with a severity of which the X-Men would have most likely disapproved. [New X-Men (1st series) #136]

Though he had no doubt committed murder, Xorn had done so in the defense of his students, who had been in mortal jeopardy. Likewise, over the next few weeks and months, Xorn would stand up for his students, albeit less lethally, during the student riot at the Xavier Institute on Open Day and when they were questioned by Bishop during the investigation of the apparent murder of Emma Frost. [New X-Men (1st series) #138, 140] 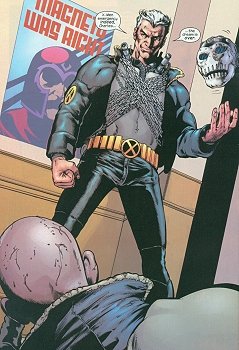 However, Xorn’s true intentions with his class became clear when his newest student, the Afghani called “Dust,” refused to join with Xorn’s class for his master plan. When she went looking for help, Dust was re-captured by Xorn in Xavier’s presence. Realizing that the time for deception was over, Xorn removed his helmet to reveal his true identity of Magneto - the oldest foe of the X-Men. [New X-Men (1st series) #146]

His true identity revealed, Magneto quickly took control of the isle of Manhattan, intending on renaming it New Genosha, after the nation that he had once ruled prior to its destruction by Cassandra Nova’s sentinels. With his “special class” forming the inner circle of his new Brotherhood of Mutants, Magneto attempted to rally the mutants of Manhattan, rounding up thousands of humans for exterminations in crematoria. [New X-Men (1st series) #147]

However, beyond this, Magneto had little in the way of a true plan. His viciousness seemed senseless to the Beak and Angel Salvatore, causing them to rebel. Likewise, it soon became clear to the Esme, the member of the Stepford Cuckoos who had joined his cause - and actually had helped in much of the preparation for him at the Institute - that Magneto would never consider her his equal. She was just a child to him. As the mutant euphoria of control quickly turned into a purposeless mob, it became clear that Magneto lacked any new ideas. His were outdated thoughts that offered nothing to the new generation of mutants… except his face on a T-Shirt.

When the X-Men finally regrouped and counter-attacked, Magneto was alone, his own Brotherhood having abandoned him.

His last act was one of sheer vengeance, where he used energy he had been storing up to reverse the Earth’s magnetic poles (another of his old plans) to give Jean Grey a lethal electromagnetic pulse: the equivalent of a planetary-scale stroke. Incensed at her murder, Wolverine decapitated him, ending his threat forever. [New X-Men (1st series) #150]

Some time thereafter, Charles Xavier decided to take a leave of absence from the X-Men. It seemed that he wished to pass the baton of his dream to a new generation. As such, he decided to take a sabbatical to the ruined island nation of Genosha. On his trip there, he took the corpse of Magneto, intent on burying him there in his adopted homeland. Shortly thereafter, however, Xavier came across the very much living Magneto. Even more shocking was the fact that this seemed to have been of no surprise to Xavier, who explained quite directly that the man in the coffin he had brought was an imposter, who had pretended to be Magneto. [Uncanny X-Men #442-443, Excalibur (2nd series) #1]

And so the retcon began.