BIOGRAPHY
In unrevealed circumstances, the middle-aged mutant woman known simply as Annalee and her four children, all mutants themselves, became outcasts in society and sought refuge within the underground mutant community known as the Morlocks. Specifically, they spent time with the group known as the Drain Dwellers, who lived relatively close to the surface world. Annalee's four children apparently spent time away from the tunnels and it was during one of these times, on an errand for the Drain Dwellers, that they were away from the tunnels where they were shot and killed by an unknown assailant. Their bodies were found by other Morlocks and returned to the tunnels. [Uncanny X-Men (1st series) #193] 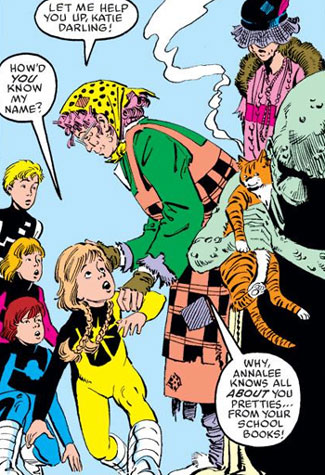 So overcome with grief at the loss of her children, Annalee's empathic powers began to cause trouble for the other Morlocks. They were forced to have Leech stay with Annalee so that his power-canceling abilities would cancel out Annalee's strong emotions, although this also meant that the other Morlocks were unable to use their powers too. When the child heroes known as Power Pack returned to the Morlock tunnels after leaving their school books there on an earlier adventure, the Drain Dwellers took this opportunity to capture the children so that they could give them to Annalee to replace her dead ones. Power Pack put up a struggle in an attempt to escape, but they soon found their powers neutralized as Leech and Annalee met up with the group. Annalee had already learned the children’s names from their school books and the Drain Dwellers were pleased when Annalee announced that she liked the children. Further, one of the Drain Dwellers, Piper, explained that their memories would be changed by Beautiful Dreamer, and that Masque would change their faces, so that Power Pack would only remember the Alley as their home and Annalee as their mother.

Power Pack naturally wanted to return to their parents and, when opportunity struck, they freed themselves from their restraints and attempted to make an escape. This was just in time, as Masque had arrived and was about to transform Katie Power's face. Julie Power grabbed Leech's kitty and made a run for it, so that Leech would follow her and his power would stop canceling out the rest of Power Pack's abilities. Annalee did not like her new children fighting with the other Morlocks and her emotional fraught soon began to consume the Power children. 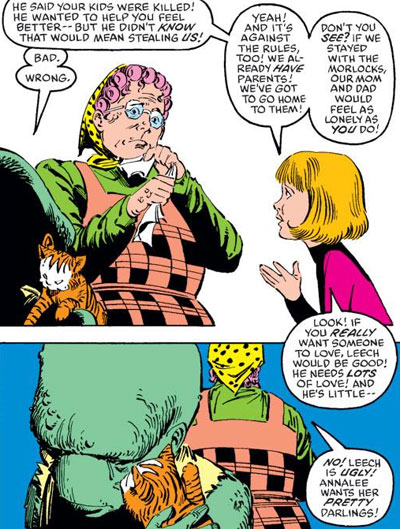 By coincidence, Nightcrawler and Shadowcat were in the tunnels on unrelated business and soon became aware of the situation, so they made themselves known to Power Pack. At the same time, Julie continued to run away with Leech's kitten. However, when Julie realized that Leech was alone and that the kitten was the only thing in the world he had, she gave it back to him and they returned to the others, with Leech and Julie now friends. Julie reminded Annalee that, though her kids were gone, that didn't give her the right to take Power Pack, as then their parents would be sad like she was. When Julie suggested that she adopt Leech, noting that he needed lots of love as well, Analee was disgusted and turned her back on the youth, declaring him ugly. Power Pack departed with the X-Men and returned to their apartment. Annalee followed them, however, and stared up at the bedroom window during the night and vowed that she would be watching over them and that they would soon be with her – forever! [Power Pack (1st series) #12]

Annalee did not wait long to enact her next attempt at making the Power children her own. She arranged for their bedrooms and favorite things to be taken from the Power apartment and placed in the Morlock Tunnels. The young heroes were captured, after which Masque changed their faces. During the confusion, though, Katie Power was able to escape. She was found and taken to hospital, where a news report about her was made. This report was seen by Shadowcat, who realized that Masque and the Morlocks were up to no good. Katie was rescued from hospital by Shadowcat, and with several other X-Men, returned to the Morlock tunnels, where they were confronted by Annalee, the Power children and several other Morlocks.  The Power children's minds were controlled so that they believed Annalee their mother and wore an assortment of rag-like Morlock clothing. 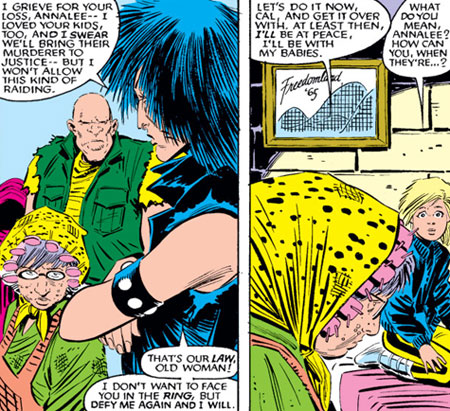 The two groups fought for a time, until Callisto returned and was not impressed to see what her fellow Morlocks had done. She ordered the appearances and memories of the Power children restored, and told Annalee that she would bring her children’s killer to justice. She also warned Annalee that she must not defy her and go after the Power children again, or they would face each other in the ring. A resigned Annalee suggested that they do it anyway, so she could be at peace with her babies. Katie realized what Annalee meant and told her that she must not do that. Annalee received some comfort from Katie when she gave her a hug, told her she can be her special grandmother, and invited her to Thanksgiving. [Uncanny X-Men (1st series) 195]

Annalee accepted the invitation to attend the Power Pack's Thanksgiving dinner and baked a sweet potato casserole to take with her. However, she continued to resent Leech, who hung around her. Annalee decided that Leech could not attend the Thanksgiving party and locked him in a cupboard, not wanting her time with Katie and the others to be spoiled by his presence. Annalee vowed to use her power to project only happiness on this special occasion, not her usual despair. 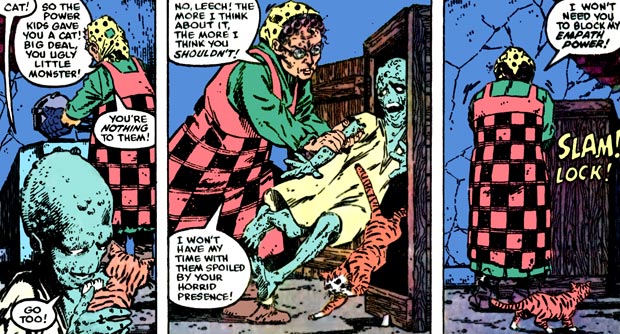 Leech was soon let out of the cupboard by another Morlock and started to follow Annalee across the city, getting caught up in a celebratory parade. When Annalee noticed Leech was following her, she used her power to make several people in the parade hate him, and start to chase him. 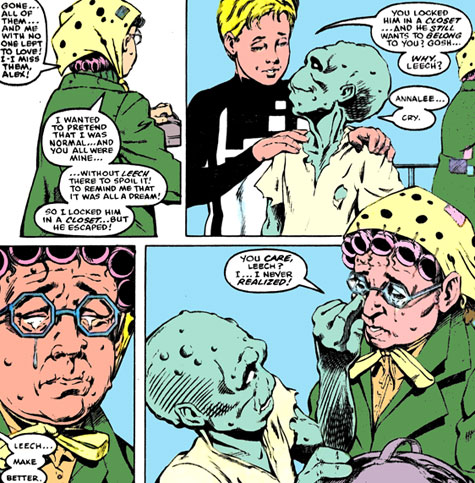 With the help of Cloak and Dagger, Alex Power was able to save Leech and bring him closer to Annalee, to shut her power off. Annalee received a plea from Alex to stop doing this. Annalee stated that Leech was a monster, nothing like her children, and Alex was confused as to why Leech would go to such lengths to follow Annalee. Leech explained that he wanted Annalee to be his momma and wiped away Annalee's tears when she started to cry. Annalee admitted that she has behaved like a monster and kissed Leech. They arrived at the Thanksgiving party together and, afterwards, the Power children gave Leech some of their clothes to keep him warm. Annalee started acted kindly towards Leech and they left the party hand in hand. [Power Pack (1st series) #19]

It is unknown what kind of a mother Annalee was to Leech, but her motherly instincts apparently led her to adopt three new children, presumably all Morlocks. She was in hiding with the three during the Marauders’ massacre of the Morlocks until she was discovered by Scalphunter. Annalee begged Scalphunter to spare the children, but the assassin was not only unmoved, he revealed that it was he who had killed her four children on the surface some months ago. With that, he shot Analee and the three children, murdering them all. [Uncanny X-Men (1st series) #211]

Annalee's body, and those of her new foster children, were discovered in the Morlock Tunnels by Power Pack a short time later, when they were in the tunnels searching for Leech. [Power Pack (1st series) #27] Whatever kind of mother Annalee was to Leech, the young mutant would from time-to-time think fondly of her following her death. [New Mutants Annual #7]