Hisako Ichiki was born in Toyko, Japan and lived there for much of her childhood with her parents and brother. During her early teenage years, Hisako’s mutant power to create a psionic armor around her body manifested and she was enrolled at the Xavier School for Higher Learning in America. For Hisako, this was a dream come true, as she had long admired the X-Men and now had designs on becoming a fully-fledged member.

Hisako joined the school at a key time, as it had only recently gone public and opened its doors to new students. Like the other students, she was placed in one of the many training squads under 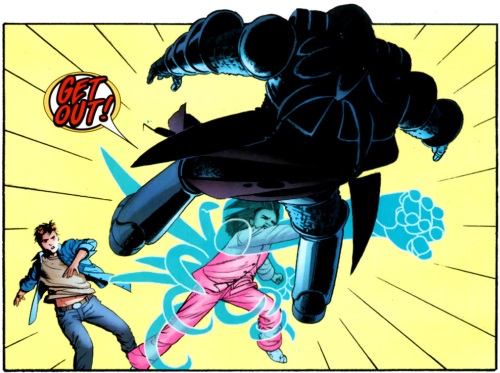 the tutelage of a senior X-Man. Despite the large student body at the time, at first Hisako didn’t seem to socialize with many of the other students. One of her closest friends at the time was a boy named Wing, who had the ability to fly. One night, she and Wing were confronted by an alien named Ord, who had broken in to the X-Mansion looking to fight the X-Men. As it turned out, the X-Men were on a mission, so Ord instead attacked the two teens, wanting to leave the X-Men a brutal message. Hisako fought back against Ord but was quickly beaten, leaving Wing to the alien’s mercy. Ord used a serum to removes Wing’s mutant abilities, leaving him permanently depowered. Throwing Wing from a great height, Ord would have surely killed the boy had it not been for Hisako catching him before he hit the ground. [Astonishing X-Men (3rd series) #4-6, 36]

Wing was inconsolable at the loss of his powers and nothing Hisako said helped. Instead, he slipped deeper and deeper into depression. Unbeknownst to everyone else, Wing used the Danger Rooms holographic environment in an attempt to trick his body into restarting his mutant power. During an attack on the mansion, Hisako and the other students were locked for safety in the Danger Room, where she was devastated to discover the body of Wing lying in the middle of the room. It turned out the training room’s computers had become sentient and it had tricked Wing in to killing himself and then used his death to break free of its complex programming. Building itself a body and calling itself Danger, the artificial intelligence attacked Hisako and the X-Men until it escaped the mansion. The X-Men went in pursuit and eventually defeated Danger, but Hisako was left heartbroken by the loss of her closest friend at the school. [Astonishing X-Men (3rd series) #7-9]

Hiasko was one of the few mutants to retain her powers after M-Day and afterward she remained at the school, despite its significantly smaller student body. With various anti-mutant groups looking to finish off mutantkind once and for all, the X-Men upped their training regime. Hisako performed well, even becoming the last-student-standing in an all-out brawl against Wolverine. Her training soon paid off, as she had to come to the aid of the X-Men during an attack on the 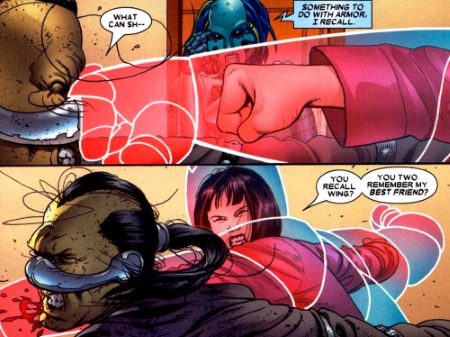 team by Cassandra Nova. Beast had been reverted to a feral mindset, causing him to attack those around him. Hisako fended him off and then helped protect some of the other X-Men who were either injured or incapacitated. During Nova’s attack, both Danger and Ord returned to the mansion as well, looking for revenge against the X-Men. Hisako took the opportunity to confront Ord, as she held him partly responsible for Wing’s death. She held her own against him for a while but it was only thanks to Beast and Wolverine that Ord and Danger were eventually subdued. In a surprising turn of events, Hisako, along with the entire group of X-Men, was teleported aboard a spaceship piloted by SWORD, a branch of SHIELD which was dedicated to protecting Earth from extraterrestrial threats. Abigail Brand, the head of SWORD, had been monitoring a situation on Ord’s home world and decided she needed all the X-Men to help her sort it out. [Astonishing X-Men (3rd series) #13-18]

Whilst Hisako hadn’t been one of Brand’s intended targets, she was along for the ride nonetheless as the ship raced across the galaxy to Breakworld, Ord’s homeworld. After borrowing a spare uniform off Kitty, Hisako watched as the X-Men made their plans for the situation. As the ship neared Breakworld, it was attacked and destroyed by the planet’s planetary defenses. Falling from orbit, Hisako managed to grab Wolverine and used her armor to nullify the impact on her body when she landed. Wolverine wasn’t so lucky and it took him a few hours to heal. During this time, Wolverine returned the favor, helping calm down Hisako, who was starting to freak out about being on an alien planet. After a pep talk, he told her she was now one of the X-Men, fulfilling the dream she had when she first came to the mansion. 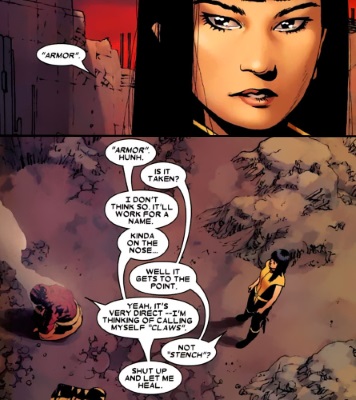 After a little deliberation, Hisako opted for the codename Armor, much to the amusement of Wolverine, who teased her for its simplicity. They soon met up with the rest of the X-Men and uncovered a conspiracy to destroy the entire planet. Armor and the team worked alongside SWORD to prevent the destruction of Breakworld and return home. During the final battle, the rogue Breakworlders behind the whole affair fired a giant bullet at Earth, which threatened to wipe out all life on the planet. Fortunately, Kitty Pryde had become trapped in the bullet before it had been fired and used her abilities to phase the projectile safely through the planet. Unfortunately, she was seemingly lost forever as the bullet sped off ever deeper in to space. Seeing Wolverine devastated at the loss of his former protégé, Armor stepped up and forced him to continue her training sessions in a bid to take his mind off it. [Astonishing X-Men (3rd series) #19-24, Giant-Sized Astonishing X-Men #1]

Hisako received a surprise visitor soon after when Cable arrived from the future in need of her help. He refused to divulge any information after her from the future, but he did let slip that she would officially join the X-Men, something that delighted the young girl. Cable was trying to find out who was killing members of the Externals, an immortal group of mutants, and he was 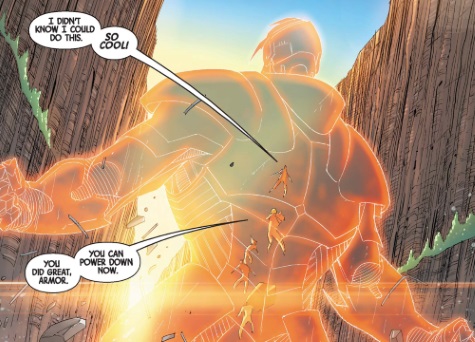 assembling a team to help him. After some investigation, the team soon found themselves at the secret base of Gideon, one of the Externals. They discovered he was the one killing his kind and Armor found herself fighting for her life against his robotic minions. Gideon escaped and set the base to self-destruct, but Cable was prepared for such an eventuality as he had Armor on hand. Knowing what she was capable of in the future, Cable instructed Armor to envelop the entire team in her exoskeleton, something she had never done at the point. The plan worked and the team was saved from the destruction of the base. Gideon was eventually stopped by the group and the threat to the remaining Externals ended. In the aftermath, everything seemed to return to normal as everyone in the group went their separate ways, but for Hisako her life was changed, now that she had the knowledge that being a part of the X-Men was in her future. [Cable (1st series) #151-154]

Whilst Armor didn’t normally join the other students on their missions, she did so during the chaos following the birth of the first mutant born since M-Day. Aware that the religious zealots known as the Purifiers were hunting down the mutant baby, Hisako and a group of her fellow students infiltrated a Purifier base in the middle of the night. Armor and the others thought they had the upper hand until they discovered Lady Deathstrike there. Unfortunately, the cyborg had a team of Reavers with her and the students would surely have been killed had it not been for Pixie teleporting everyone out at the last minute. [Messiah Complex crossover]

The X-Men soon relocated their base to San Francisco and many of the students, Armor included, join the team there. After successfully proving herself on Battleworld, Hisako was allowed to remain on Cyclops’ “Astonishing” team as a junior X-Man. The next mission involved the team travelling all over the planet, chasing after mutants from an alternate reality. During a fight with some of these mutants, Armor discovered a weakness in her forcefields. When she was shot at with lasers, the beams passed through her armor and injured her. Despite her wounds, however, she still managed to hold her own against the threat. [Astonishing X-Men (3rd series) #25-30]

Hisako's training soon paid off. When Wolverine's son Daken betrayed his father and set out to find the fabled Muramasa blade, Hisako was deputized as a fully-fledged X-Man and assigned among the X-Men team assembled to stop him. The Muramasa blade was particularly deadly, as its enchantment ensured that any wound created by it would never heal. During the mission, Daken managed to get a hold of the blade and was about to kill Cyclops with it, but Armor heroically threw herself in the way. 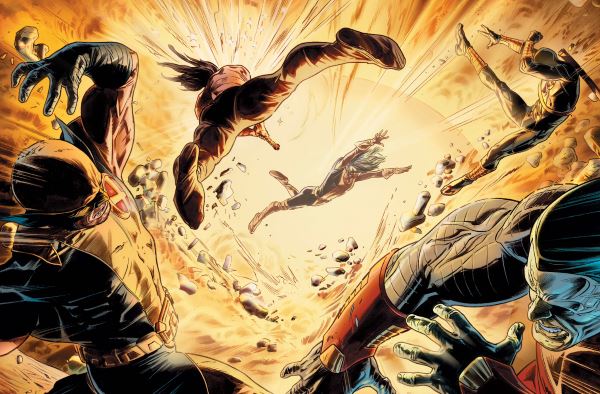 One of the more unique aspects of Armor's psionic exoskeleton came in to play as the Muramasa blade was unable to cut through memory... the very thing of which her armor was made. As the blade struck her exoskeleton, it created an explosive feedback that knocked Daken down and dazed him long enough for the X-Men to regroup and reclaim the blade. [Wolverine Origins #33-35]

Though they had been generally embraced by the people and local government of San Francisco, the acceptance of the X-Men was not universal and they soon found themselves the subject of a massive protest. Norman Osborn, who had recently risen into a place of political power, used the chaos as a pretense to eliminate the X-Men as a possible threat. When the X-Men and Osborn's forces soon clashed, Armor got the chance to go up again against Daken, who was working for Osborn’s “Dark X-Men.” Much like before, Armor and her teammates made quick work of 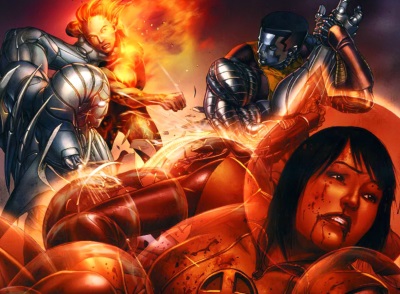 Wolverine's arrogant son, who fled. In the fallout of Osborn's attack, the X-Men decided to move from the mainland to a newly created, artificial island called Utopia, positioned just off the coast of San Francisco. [Utopia crossover]

Armor was proving herself to be a particularly capable member of the team, so much so in fact that she often found herself on the front line of battle. Her incredibly durable armor meant she was part of the "tough skin" group of X-Men and was deployed to fight the likes of vampires and future sentinels when they attacked the island. [X-Men (3rd series) #5, Second Coming crossover]