Unfortunately, tragedy was soon to strike Hisako when both her mother and brother were killed in a car crash. As her exoskeleton was powered by the memories of her ancestors, Hisako knew immediately something bad had happened when her armor briefly flared out of control. Sure enough, she received the dreaded phone call from her father and rushed back to Japan to attend their funeral, with the rest of her "Astonishing" team going with her for support. Hisako's relationship with her father wasn't exactly close and she struggled to find any comfort being around him. It didn't help the fact that she felt guilty for not being with her family when they died, theorizing that she could have saved them if she had also been in the car. 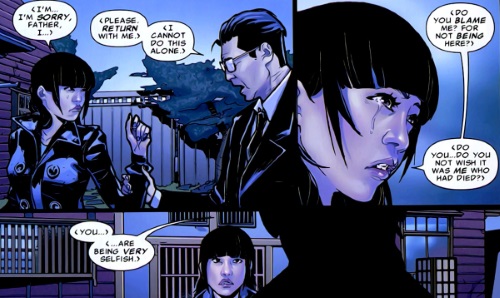 During the funeral, Hisako’s father wanted her close, but when she realized the other X-Men had gotten themselves into trouble with a giant creature that was attacking Toyko, she felt torn as to which family she should stand alongside. Choosing to go help the X-Men, she arrived in central Tokyo in the nick of time, just as the X-Men were running out of ideas as to how to defeat the monster. Empowered by the memories of her dead family, she managed to create a skyscraper-sized exoskeleton that was able to beat the creature into submission. Cyclops was impressed at her composure during the fight but Wolverine took a more cynical view that Hisako was throwing herself into super-heroics as a way to avoid confronting her father.

Realizing that the creature came from the infamous Monster Island located off the coast of Japan, Armor and the X-Men travelled there to discover why it had strayed on to the mainland. As the X-jet flew over the island, it was attacked by a flock of giant birds, causing the plane to lose control. Armor came to the rescue again by enveloping her exoskeleton around the X-jet, cushioning the impact when they crashed. In doing so, she managed to over-exert herself and slipped into unconsciousness. Emma theorized that when Hisako received the power-upgrade from her deceased mother and brother, her body wasn't physically capable of coping with the sudden 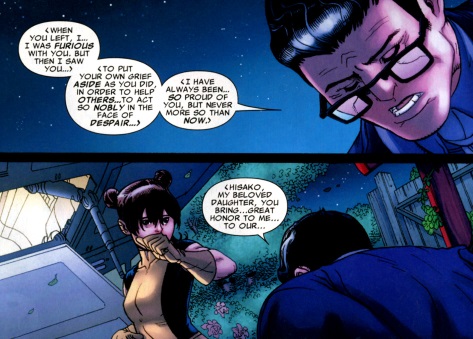 boost. Whilst she slept, the rest of the team solved the mystery on Monster Island, discovering that it was the mutant Mentallo who was sending the creatures to the mainland. Afterwards, Wolverine and Hisako had a heart-to-heart and she realized she needed to go back home to clear the air. When she arrived at her father's place, she was taken aback when he apologized for his previous coldness towards her. As he hugged her, he told the young girl he had never been more proud of her than when she put aside her own grief to help others. [Astonishing X-Men (3rd series) #36-37, 39, 41]

Another traumatic aspect from Hisako's past came back when Danger, the Danger Room's physical form, took up residence on Utopia as the prison warden. Remembering how Danger had tricked Wing into committing suicide, Armor confronted the robot and demanded she leave the island. Danger refused to go, stating that she was invited there, and wanted to understand mutants. Armor was furious and attacked Danger, destroying the robotic woman’s body. It was to no avail though, as Danger simply reconstructed herself and threatened Armor until she stopped her assault.

The young girl began shouting at the robot until she discovered the reason Danger was on the island was because of Wing. Danger had been seeing the boy everywhere, no matter how many times she deleted his files from her system. Armor calmed down upon hearing this, realizing that Danger was experience guilt over killing the boy. The two came to an understanding, with Armor volunteering to help Danger understand the nature of mutants, firstly by telling her all about Wing. [Nation X #3]

Hisako's time on Utopia soon came to an end when a philosophical debate between Cyclops and Wolverine on the future of the X-Men split the team in two. Following the “Schism,” Wolverine decided to rebuild the old school in New York and many of the students, Hisako included, joined him there. Wolverine was adamant that the younger generation shouldn't be thrust into battle and 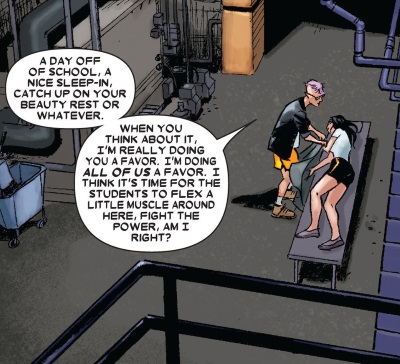 used as soldiers, so Armor wasn't put on any active squads. Instead, she was simply a student at the school, although she still maintained her rigorous training regime.

One day, when she was sparring with Wolverine, Quentin Quire knocked the both of them out and trapped their minds in a telepathic simulation in a fit of spite against Logan. In this new world, Armor and Wolverine could not remember who they were and were even shocked when they displayed their powers for the first time. All they knew was that they were being hunted for failing their unseen boss. In reality, Quire had taken Hisako's unconscious body and hidden her in the school basement, whilst he concentrated all his attention on Wolverine. Quire's telepathic world soon started to fall apart, however, as Armor and Wolverine began to question everything around them. It became very personal for Armor when Quire used her dead brother's likeness to create a group 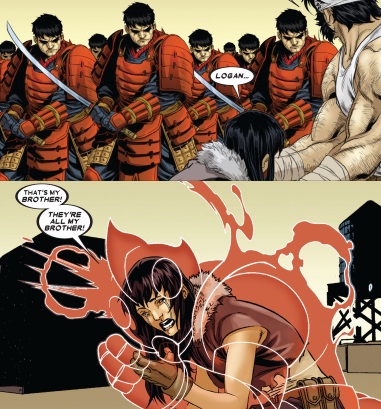 of enemies to hunt the two. When Armor saw them, she recognized her brother's face but couldn't recall anything else from her life. Armor was eventually found in the basement and taken to Rachel Grey, who soon realized what was going on. Quire had also had a change of heart and journeyed into the telepathic world to pull Hisako and Wolverine out. In the end, Quire had to allow himself to die in the simulation so that the other two could be free of his influence. Armor woke up and quickly recovered from the ordeal, but it demonstrated to everyone that, despite their age, the students needed to keep up with their training. [X-Men: Regenesis #1, Wolverine and the X-Men (1st series) #1-3, Wolverine and the X-Men: Alpha and Omega #1-5]

After almost a year at the school, it came time for a number of the students to graduate, with Hisako being one of them. She remained at the school as one of the junior X-Men, but also acted as a mentor for the younger students who were still training. Some of her classmates who had not yet graduated struggled to adjust to the likes of Hisako giving them orders; Oya especially 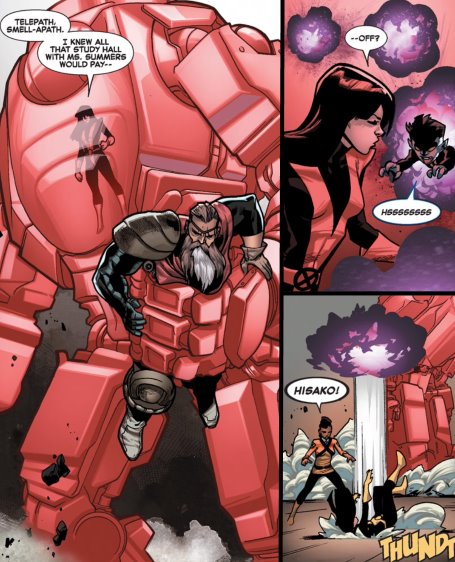 seemed put out by Hisako being in charge. Whilst the two girls often butted heads, they did put aside their animosity when the school was attacked by Honest John, a member of the Askani order. Hisako managed to surprise Honest John by bursting up through the floor with her exoskeleton and grabbing hold of him. He had a trick up his sleeve though and telepathically took control of one of the bamfs, small teleporting creatures that had infested the school. He forced the bamf to enter Hisako's armor and remove her body from it, leaving the exoskeleton stuck like a statue. Whilst Honest John was later defeated, Hisako was left devastated when she realized she no longer had control over her armor. [Wolverine and the X-Men (2nd series) #1-6]

Hisako remained disconnected from her exoskeleton, no matter how much she concentrated, and even a pep talk from Iceman didn’t help. Growing more and more desperate, Hisako one day lost her temper in frustration, causing the armor to shatter into hundreds of pieces. Whilst the act demonstrated she was still subconsciously linked to the armor, she still couldn't absorb it back into herself again. [Wolverine and the X-Men (2nd series) #7-10]

[Note: Hisako would soon regain control of her armor but no explanation was ever given as to how she did it. In Wolverine and the X-Men (2nd series) #10 it was still shattered, but in Death of Wolverine - Life after Logan #1 her armor was back to normal again. Both issues were published within a month of each other and dealt with the fallout from Wolverine's death.]

If that wasn't enough, she had to cope with the death of her friend and mentor, Wolverine. Unlike many of the other X-Men who had died whilst she had been at the school, Hisako knew the moment Wolverine died, as her armor reacted in the same way it had for her other deceased family members. None of the scientists at the school could explain why her armor would react in such a way and so Hisako took to fighting simulations of Wolverine's enemies in the Danger Room as a way to vent her frustration. Surprisingly, it was Hellion, the school's arrogant hothead, who got through to her and made her realize that, if Wolverine's memory was in her armor, then he was with her all the time. [Death of Wolverine - Life after Logan #1]

The next year or so was a turbulent time for the X-Men, with Storm and then Kitty taking over as role of headmistress for the school. In that time, many of the students who had graduated had been sidelined, whilst the other more senior X-Men went out on missions. Armor was not happy just sitting around and she grouped up with some of the others who felt the same and confronted 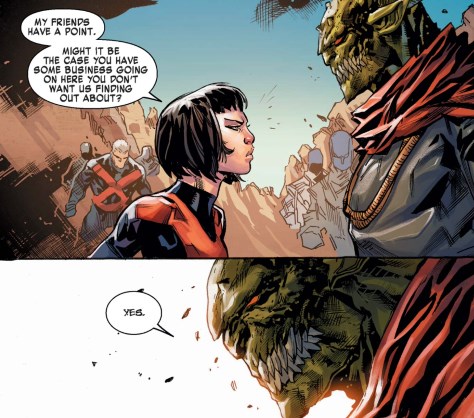 Kitty. The X-Men were fighting a new incarnation of the Brotherhood at the time and were low on numbers. With her back against the wall, Kitty reluctantly allowed Armor and Rockslide to join her team. Hisako correctly guessed that the reason Kitty chose them in particular was because their power set made them strong and durable, reducing their chances of being injured. Armor performed well on the mission, showing Kitty that the younger generation of students didn’t need protection. When Kitty and Nightcrawler were kidnapped and taken to the Negative Zone, Armor was on the team that assembled to retrieve them. Much like her very first mission with the X-Men on Breakworld, Hisako found herself stranded on another world fighting aliens. Only this time she was much more confident and even went toe-to-toe with an enormous alien god called Scythian. [X-Men: Gold #1-3, 17-20]

Hisako finally got her wish and was officially placed on an active team when Iceman came back to the school, looking to lead his own team. After a bumpy start with getting the team to fight together effectively, the group was called into action when Scythian, the demonic god from the Negative Zone, came to Earth. Armor fought with her new team, alongside many of the other X-Men to stop the creature and send him back where he came from. [X-Men: Gold #23-25]