(click on an image to see a larger version) 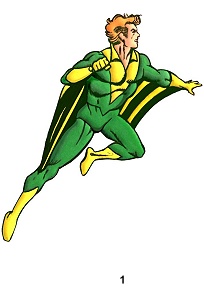 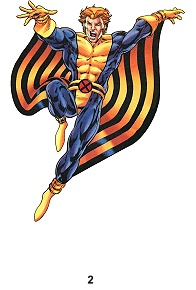 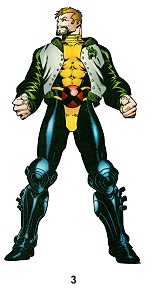 1) Banshee originally wore a formfitting green suit with a yellow triangle in front that became a high collar in the back. He wore matching tight yellow gloves and boots. What kind of became the signature of his costume though were the black and yellow winglike stripes, connecting the arms to his hips. They made it easier for him to fly. [X-Men (1st series) #28]

2) When the Reavers attacked Muir Island, Banshee wore the basic blue and yellow training outfit of the X-Men. A couple of days later, Moira MacTaggert designed new body suits that were an updated version of the classic X-Men costume, including body armor and other special functions. Banshees’ costume was once again equipped with the stripes. [Uncanny X-Men (1st series) #255, 258]

3) As headmaster of Generation X, Sean rarely used a costume at all, but wore average stree tclothes. Only when training with his young charges, he went back to his modified blue and gold standard X-Men look. Much like the rest of the team, Sean wore clunkier boots and, occasionally, switched to a similar outfit without the striped wings, often wearing a jacket over the suit. [Generation X (1st series) #4, 16, 18] 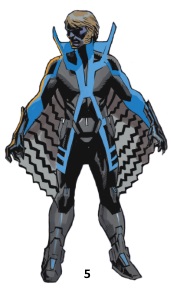 4) As leader of the paramilitary X-Corps, Sean wore a sleek black military style uniform, trimmed with some red lines, a subtle X-logo and a gun belt. [Uncanny X-Men (1st series) #401]

-) After the events with the X-Corp, until his death (and beyond), Banshee returned to his classic green and gold costume

5) When Banshee was resurrected as a Horseman of Death, he donned an armored, black and blue variation of his classic costume. Like his earlier costumes, this one had black and yellow striped wings running from his wrists to his legs. However, the edging on these wings was jagged rather than smooth. [Uncanny Avengers (1st series) #9]