Sean Cassidy and his older cousin, Tom, grew up in Cassidy Keep, their family’s ancient castle in County Mayo, in the Republic of Ireland. The castle was an odd place where Leprechauns existed under the protection of the Cassidy family. 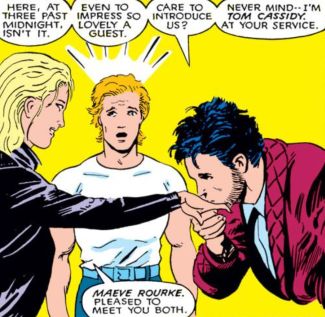 Both Sean and Tom were mutants, who strangely were immune to each other’s powers. Sean’s power was a sonic scream, which the neighbors referred to as a Banshee’s scream, based on a legendary Irish death-demon.

As a young man, Sean joined Interpol as an undercover agent. Not much later, after visiting a concert in Northern Ireland, Sean missed the last train back home and decided to hitch a ride. Instead, he was picked up by a corrupt police officer, who suspected him to be scouting for the IRA and wanted to arrest him. He was saved by a young lady on a bike, her name being Maeve Rourke, a university student. Chased by the police, the bike was damaged but Sean used his sonic scream to fly away with her. Maeve wasn’t afraid of his mutant power and, once they arrived at the castle, she was also introduced to Tom. Both men were instantly smitten by Maeve and fought for her affections. [Classic X-Men #16] 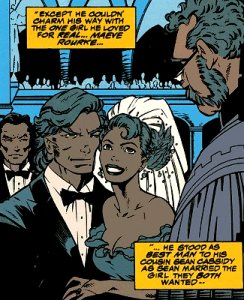 Eventually it was Sean though who prevailed. He and Maeve decided to get married. In spite of his love for her, Tom wanted what was best for Maeve, even if that meant marrying someone else, and acted as Sean’s best man.

Shortly after their honeymoon, Sean was called away on another undercover mission for Interpol, not aware of the fact that Maeve was pregnant. He stayed away for months, not knowing that Maeve had given birth to their daughter, Theresa.

Not much later, Maeve was killed in an IRA bombing. With no means to contact Sean, Tom took care of the infant Theresa. When Sean returned to learn of his wife’s death, he was devastated. Before Tom could even tell him of the existence of his daughter, Sean lashed out at Tom with his sonic scream for not having taken better care of the woman they loved. While Sean flew away in anger, Tom fell 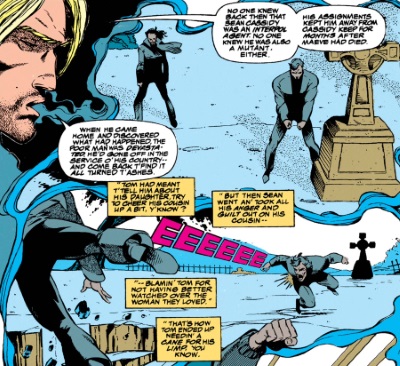 into a chasm, breaking his leg as a result of the attack, which left him with a limp. Angrily, Tom swore to make Sean pay and vowed to never tell him about his daughter, raising her himself instead. [X-Force (1st series) #31]

Sean immersed himself in his Interpol work, though he kept mum about his mutant powers. On one of his missions as a young agent, he was to safeguard a weapons specialist named Patrick Lipton and his newest invention on their way to Rome. However, the train was attacked by agents of the terrorist group, HYDRA. Lipton and Sean got out of the train and Sean tried to clear the tracks to enable the train to start again. Unfortunately he was shot by a HYDRA agent, causing him to let loose with a sonic scream before he fell. Realizing the danger of giving HYDRA access to Sean’s power, Lipton used his invention to kill the few HYDRA agents who had witnessed this and then sacrificed himself by giving himself up to the rest to HYDRA, provided they’d spare Sean, meaning Lipton would have to work for HYDRA for the rest of his life. Only many years later would Sean learn of his sacrifice and be there to comfort Lipton in the hour of his death. [X-Men Annual (2nd series) #3]

Also, while still in the early stages of his Interpol career, Sean tried to convince his superiors of a serial killer, making his way through Europe. He was ordered to drop the case, as he was on the verge of creating an international incident. Sean went rogue, intent on catching the murderer, orders or not. He was aided in his attempt of tracking the killer by a mystery man, who was afraid of a genetic civil war looming; a mystery man Sean would only later realize was Magneto. The enigmatic man informed Sean that the killer would be waiting at his homestead, Cassidy Keep, and ordered him to stop him permanently.

He was joined by Inspector Magrite Devreaux, who hadn’t believed him about the killer before, at Cassidy Keep, as she had now come to believe Sean’s story of a cover-up, and they found the killer, a Russian named Arkady, who was expecting them and asking Cassidy to take him in. He wanted Sean to kill him, as he no longer wanted to be the pet mutant of the Russian government.

Sean refused, as he didn’t want to be an assassin. Believing Sean needed more motivation, Arkady infected Inspector Devreaux with his death spore virus, causing her to fall to her death from the castle’s battlement. Furious, Sean emptied his gun at the murderer. Arkady survived and, while Sean believed he was being sent to prison, he was actually turned to a special interest group that turned him into the villain, Omega Red. [Generation X (1st series) #10-11] 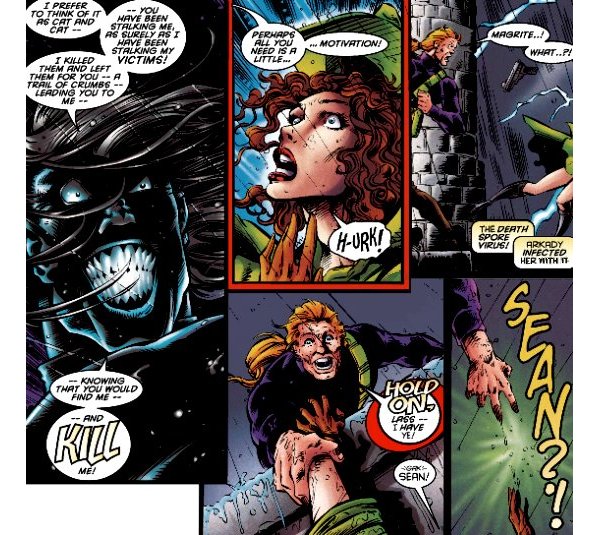 At some time, Sean was working for the NYPD, possibly in some sort of exchange program. One evening, Sean and his partner were doing a surveillance job of Harry Leland, who was attending a party that evening. There, they noticed a young woman in trouble - one Emma Frost. When he saw Emma being accosted and chased by several men, Sean ignored his orders and ran to join the fray. 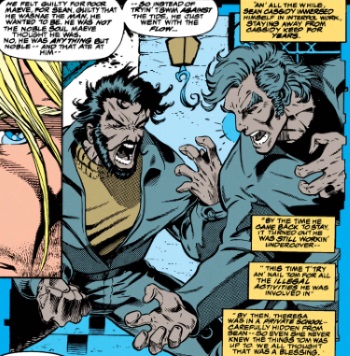 He and his partners found the men dead shortly thereafter and a trail that led to the sewers. Emma had been abducted by the Dark Beast, who wanted her help. Sean, believing her to be in danger, attacked him. Emma telepathically stopped the Beast from killing him and made everybody else - including Sean - forget about this encounter. [Generation X #minus 1]

Years later, Sean returned to Cassidy Keep, still on an undercover mission for Interpol, this time to nail Black Tom for all the illegal activities he was involved in. Sean was responsible for sending Tom to jail, still not having learned anything about Theresa, who was at boarding school by then. [X-Force (1st series) #31] 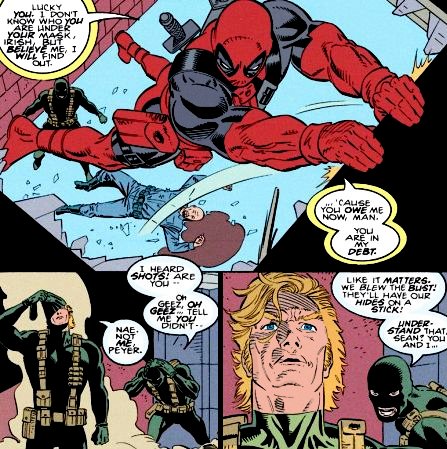 One of Sean’s last jobs for Interpol was a rather delicate one. Sean and his colleague, Daniel Peyer, were to sneak into the building of a mobster named Almadovar and retrieve precious information from him. The operation had been prepared for years. Once inside, Sean secretly used his sonic powers to deactivate the security system, but that didn’t prevent Almadovar from noticing him and pointing a gun at him. Right then, the mercenary known as Deadpool burst in and killed Almadovar, who had a price on his head. While Sean’s life was saved, the Interpol job was now blown, the information useless without Almadovar. Sean took the blame for the failed job and, after more than 10 years of service, he quit Interpol. [Deadpool (1st series) #2]