Little is known about the Banshee’s activities over the next months, though apparently he made himself a costume and started to work as a super-hero. At one point, he was captured by operatives of Factor Three, a group led by the mysterious Mutant Master, and was made to wear a headband that allowed the criminal group to influence him. There were explosives rigged to the device, so that the headband would explode should he try to tamper with it, and also it seemed to affect his moral sense, for Banshee grew much more reckless, stealing an expensive painting just because it reminded him of his native area.

When Factor Three made their move against the X-Men in order to kidnap Professor Xavier, Banshee was teamed up with the Ogre and the deadly duo nearly succeeded. However, they came unprepared for fighting the Mimic, the X-Men’s latest addition, and, after Xavier sensed the danger of the headband during the battle, he found a way to deactivate it. Free of the evil influence, the relieved Banshee thanked the X-Men before leaving again, pursuing Factor Three on his own. [X-Men (1st series) #28]

Within a few weeks, Banshee located Factor Three’s secret base in the European Alps but he found himself outmatched by its defense mechanisms. Before being captured again, he at least managed to send the X-Men a messag 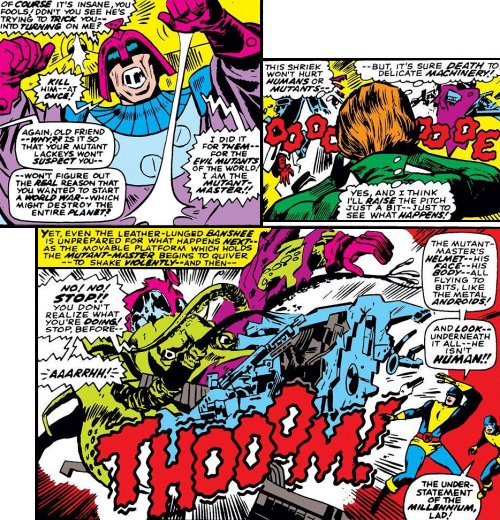 e, containing the hideout’s coordinates. Not much later, the mutant teenagers stormed the base, only to learn that Factor Three had recruited many of the villains they had fought before. During the confrontation, Sean was freed and, trying to help in the conflict, took on the Mutant Master himself, trying to disable the movable, armed platform he was using. Much to everyone’s surprise, Banshee’s scream shattered the platform, revealing that, hidden inside, was an Sirian alien, the Mutant Master and Factor being a disguise for his race’s plan of world invasion. Not willing to let himself be captured, the Sirian committed suicide and the danger of Factor Three was finally over. [X-Men (1st series) #35, 39]

Only a few weeks afterwards, Sean was captured by the Sentinels, like most other known mutants at the time, and he again had to rely on the X-Men to bail him out. [X-Men (1st series) #58, 60] It sure seemed like open hunting season on mutants, when months later, all these mutants found themselves targeted by the Secret Empire, who needed their energies to empower a special machine. Banshee was one of the few who avoided capture and went into hiding in Nashville, Tennessee. [Captain America (1st series) #172]

Eventually, Sean was presented the chance to repay the X-Men’s help when Professor Xavier visited him in his shabby Nashville apartment to inform him of the team’s disappearance, courtesy of the mutant island, Krakoa.

Among a few other international mutants the team had met before and some new additions, he helped rescue the X-Men. Sean was a little unsure about staying on permanently, though. While he enjoyed the comradeship among the mutants, being middle-aged, unlike the others, he was worried about being too old for this business. Xavier and the others talked him out of his doubts and he decided to stay, after all. His next adventure with the team proved to be rather traumatic, however, as his teammate, Thunderbird, died in front of his eyes and he was unable to do anything about it. [Giant Size X-Men #1, X-Men (1st series) #94-95] 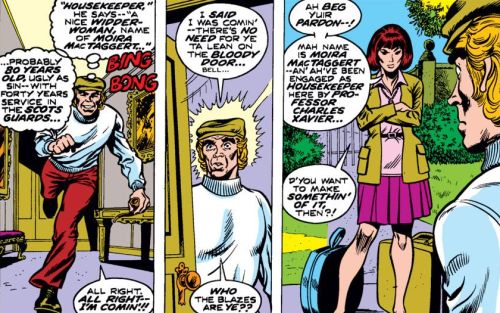 In the following weeks, Sean became a well-liked member of the group and a confidant of sorts to the Professor. Very soon, they were joined by Moira MacTaggert, who Xavier introduced as their new housekeeper. Having expected an 80-year old harridan with 40 years service in the Scottish guard, Sean was smitten when he met the lovely Moira instead and the two quickly grew very close. [X-Men (1st series) #96]

After several adventures with the team, Sean received a letter from his lawyer, informing him that he had inherited Cassidy Keep. Sean traveled there, along with the X-Men, who were in need of a vacation, unaware that the situation was a trap, 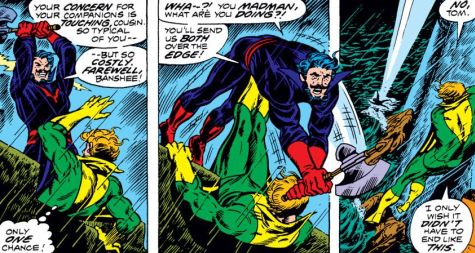 set by Black Tom and Xavier’s step-brother, the Juggernaut, whom Black Tom had met while in prison. Both of them had been freed from jail and equipped by mystery villain, Erik the Red, to trap the X-Men and, eventually, Xavier. The two villains had taken the Leprechaun families of Cassidy Keep hostage and eventually trapped the X-Men, intending to torture them to lure Xavier to their side. However, the X-Men successfully beat them, when Storm overcame her claustrophobia. Banshee fought Black Tom on the battlements of the keep and the villain seemed to plunge to his death into the sea, the Juggernaut jumping after him. [X-Men (1st series) #101-103]

The team continued to have many adventures. At one point, while believed to have perished at Magneto’s hands, they were actually stranded in the Savage Land, from where they eventually made their way to Japan, hooking up with their estranged former teammate, Sunfire. At that time, 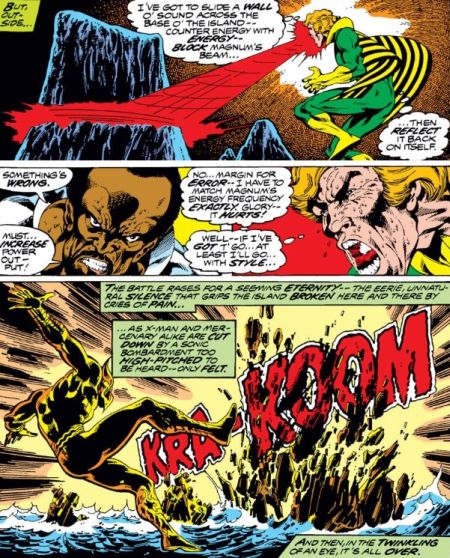 Japan was beset by a number of unnatural earthquakes, caused by the villain, Moses Magnum. In front of the X-Men, Magnum issued an ultimatum. Japan was to accept him as its sole ruler or he would sink the entire nation. The X-Men attacked Magnum’s island headquarters but the villain slipped away, intent on making his threat true by unlashing the so-called Magnum-force. Sean realized that the quakes were triggered by intent blasts of energy, so he used his sonic power to slide a wall across the base of the island, blocking Magnum’s energy beam and reflect it back upon itself. It took all the X-Man had to give, until the island finally exploded and the threat of Moses Magnum was ended. It was touch and go for Sean and it took ten days to recover in the hospital. While Sean recovered his health, his sonic power seemed to be gone for good. [X-Men (1st series) #118-119]

Banshee stayed with the group in an advisory capacity, until they were called to deal with an emergency on Muir Isle, the home and research station of Moira MacTaggert. Among several reunions with some friends and former teammates, the X-Men learned of her dangerous mutant son, Proteus, and eventually had to fight him to the death. Afterwards, Sean decided to leave the team and stay with Moira, who he felt needed him more. [X-Men (1st series) #125-129]

While Sean stayed on Muir, he still helped the X-Men out every now and then; for example, when several friends of the X-Men were kidnapped by Arcade’s partner, Miss Locke, in an attempt to blackmail them into freeing her employer from Dr. Doom. [Uncanny X-Men (1st series) #145-146] Shortly after that adventure, Sean was in for a joyous surprise. Several X-Men had mixed it up with Black Tom Cassidy and Juggernaut (who weren’t dead after all) and met Tom’s ward and Sean’s daughter, Theresa Rourke aka Siryn, who now possessed sonic power like her father used to. Sean was overjoyed when he met his daughter, who came to live with him and Moira on Muir Isle. [Uncanny X-Men (1st series) #148]

One day, though, Banshee was abducted from Muir Island by Thunderbird II - James Proudstar, the younger brother of Thunderbird I, the X-Man who had died before Sean’s eyes. James blamed the X-Men for his brother’s death and wanted to use Sean as a hostage to trap the rest of the team. Fortunately, he found that he wasn’t a murderer and Xavier talked the boy into giving up. Sean was returned to Muir Island and Moira. [Uncanny X-Men (1st series) #193, New Mutants (1st series) #26]