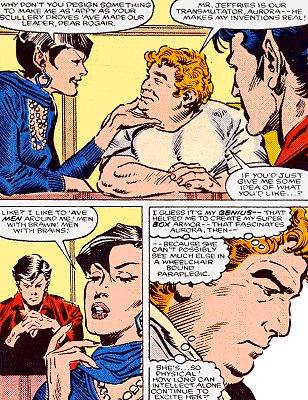 Thanks to the sheer physical power of the Box armor, and his own smarter-than-average intellect, Box served capably with Alpha Flight, despite his own disability, which he never seemed to let bother him. However, problems began to arise when Bochs not only showed first signs of becoming addicted to having mobility in the Box armor, [Alpha Flight (1st series) #34] but also when fellow teammate Aurora began to flirt with him, surprising all of Alpha Flight, though no one more than Bochs himself. Aurora claimed that she was attracted to brains as much as brawn, and Bochs was instantly captivated by the attractive Alphan's advances, even though he knew that a physical woman such as Aurora would only be temporarily fascinated by his genius intellect. [Alpha Flight (1st series) #37, Alpha Flight Annual #1]

When Alpha Flight was informed of their former member, Marrina, having been captured by the Atlantean tyrant, Attuma, in an attempt to blackmail her lover, the Sub-Mariner, they teamed up with the Avengers to help Namor rescue his bride. A long and tiring battle was held in the deep sea. Naturally, Bochs participated in the battle as Box, but he remained inside the armor for such a long time that he started to feel unwell. Panicking, Bochs phased out of his armor underwater,

but began to drown. Bochs tried to surface but, given the depth he was at, it was impossible and his lungs expanded, incurring ”the bends” he was forced to phase back into his armor. When he later told Alpha Flight about his situation, forcing him to stay inside Box for the time being, Aurora was not impressed, as she could not love a machine; she had been through all of that with Langkowski before. Roger promised Aurora that he would find a way out, somehow. [Alpha Flight (1st series) #39, Avengers (1st series) #272, Alpha Flight (1st series) #40] 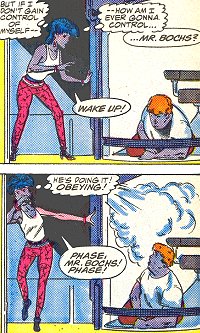 As Aurora grew cold towards Roger, Madison Jeffries stuck up for his friend and tried to find a way to free Bochs from his metal prison. The usual treatment for divers with the bends being a gradual normalization of pressure, Madison transformed a part of the Box armor into a decompression chamber, so that Roger could directly phase into it. However, the pressure in the chamber wasn’t quite right, and Roger was rendered unconscious. Even worse, the newly arrived Purple Girl possessed Madison and forced him to help her escape, leaving Bochs unattended for. However, later, after Alpha Flight had tracked her and Jeffries down, she wanted to redeem herself and used her pheromone based powers to force Bochs to wake up, and re-phase into the Box armor. Although trapped once more, Bochs was assured by Aurora that she would stand by him - provided it didn’t take too long for them to find some other means to get him out of the Box suit. [Alpha Flight (1st series) #41-42]

Aurora’s repeated threats to break up with Roger if he couldn’t become a man again took their toll, and eventually he let out his bottled up frustrations, attacking both her as well as Alpha Flight when they tried to intervene. As none of his teammates could calm him down, Madison Jeffries stopped his friend by transmutating the Box armor into a straightjacket of sorts, keeping Roger from being able to harm anyone. Despite his protests, Box was then taken to New Life Clinic of Madison’s brother, Dr. Lionel Jeffries, who possessed power over flesh, similar to Madison’s

power over metal, plastic and glass. While Alpha Flight were called away to another mission, Bochs was freed from the Box armor thanks to Dr. Jeffries, who used his powers to cure Bochs of the effects of the bends. When Roger complain about being crippled and that he believed that Aurora would leave him as soon as a better man came along, Lionel made Bochs an offer he couldn’t refuse - to make him whole. [Alpha Flight (1st series) #43-44] 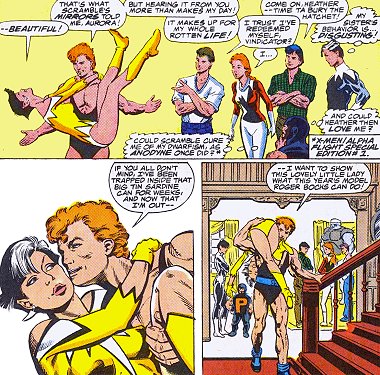 Before long, Box was reunited with his teammates, and phasing out of the armor, he displayed his new legs, which apparently had been created from all of his superfluous fat. His new appearance pleased Aurora very much and it seemed that Bochs would finally get to be with the woman he desired, as she was now as physically attracted to him as well. However, later that night, Walter Langkowski came back from the dead, his soul now inhabiting the albino Sasquatch form of the recently deceased Snowbird. Demonstrating that Roger Bochs hadn’t been anything else but a distraction for her, Aurora leapt into Sasquatch’s arms, happy to have Walt back.

Upon the discovery that Walter would morph from the Sasquatch form to a female human body (actually no big surprise, as Snowbird had been a woman), Roger believed to have still a chance with Aurora. Yet, when he tried to pressure her into taking him back, she gave him the cold shoulder, not wanting to hear any of it. 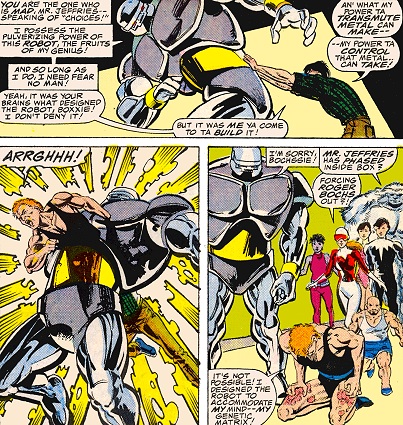 Adding to Bochs’ misery, his brand new legs slowly began to decay. Dr. Jeffries had found himself incapable of restoring Roger’s own legs, so he had grafted the legs of a recently deceased patient to Roger’s body. As his flesh fell in flakes, Bochs grew unstable, muttering over and over again that he would make Aurora and the rest of Alpha Flight pay for the way Aurora treated him. Finally, he went over the edge and took Aurora as his captive. Calling her all sorts of horrible names, Box was about to kill Aurora in front of Alpha Flight, forcing all of his teammates to turn against him. As Roger wouldn’t listen to any of their reasoning, Madison Jeffries took control of the situation by using his own powers to force Bochs out of the Box armor and taking it over himself. In his paranoid delusional state, Roger accused his friend of having planned to take the armor away from him all along. [Alpha Flight (1st series) #45-46]

Over the next days, Roger was placed in a containment tank as his legs further deteriorated and slowly he reverted back to his previous appearance.  His state of mind also didn’t change, and 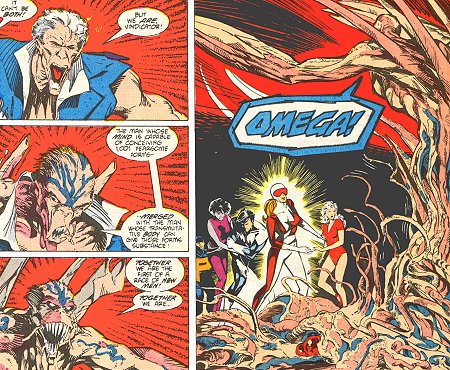 trapped inside his transparent prison, Bochs boasted that he would destroy all of Alpha Flight for treating him like this. The team saw no other option but to once more take their deranged friend to Lionel Jeffries’ New Life Clinic, hoping that he could cure Bochs’ mind. Instead though, Dr. Jeffries had an agenda of his own. All his recent experiments had only one goal in mind - the creation of an ultimate race of super-beings. Yearning for the chance to exact revenge upon Alpha Flight, Bochs accepted Lionel’s offer to physically merge with him into one being, the horror known as Omega.

Whereas Omega’s personality was dominated by the overbearing Dr. Jeffries, he had access to the brilliant, inventive mind of Bochs, and he could instantly re-order his own flesh to form organic weapons and devices according to Roger’s designs. Opposing Omega,  Alpha Flight was about to 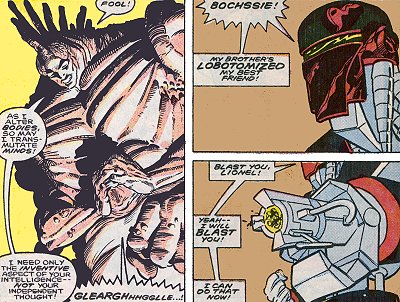 lose the fight until Madison Jeffries phased into the Box armor once more. Just like Omega altered his own shape, Madison used his transmutative power to re-shape the Box armor and add features to it, matching Omega’s every move. At that point, Bochs’ mind began to emerge in Omega, and struggling for dominance, and he realized that his teammates were right - that he was indeed insane and needed help. He tried to call off the fight, but Lionel proved to be stronger as he lobotomized Bochs inside their shared Omega form. While the Purple Girl briefly had the villain under her pheromone-based control, Madison Jeffries then transformed part of the Box armor into a laser cannon to blast the creature that was once his best friend and his brother into oblivion. [Alpha Flight (1st series) #48-49] 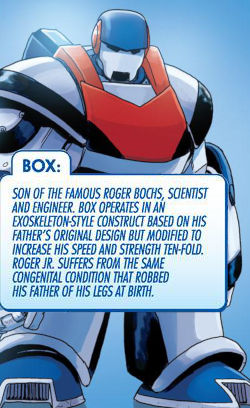 At some point in his life, Roger had a son. When this happened remains unknown, as does the identity of the mother. It is entirely possible that Roger himself is unaware he had a son. That son however was named Roger Boch Jr., and like his father, suffers from the same congenital condition that robbed Roger of his legs at birth.

Roger Jr. eventually enrolled in the Braddock Academy, where he had built a similar suit of armor that his father created, only this version was modified to increase speed and strength ten-fold. [Infinity: The Hunt #1]