Candace Southern was a childhood friend of Warren Worthington III. They had known each other through their respective families, both being wealthy and running in similar circles – including their fathers both being members of the Hellfire Club. Candace eventually moved away from her parents, taking an apartment in New York and getting a job at the United Nations building, while keeping herself extra busy with night courses at Archer College.

Candace, or “Candy” as she preferred to call herself, was on the East Side one evening when, to her delight, she was reunited with Warren, who was at the same disco. The reunion was a pleasant one, catching up with the other’s current lives. For instance, Candy learned that Warren

now attended a special “school for the gifted.” Warren had to cut the reunion short, though he offered to give Candy a call the next day, an offer for which Candy was quite happy. A few days later, Candy accompanied Warren as his date to Bobby Drake's birthday party. Candy was delighted to meet them all and told them she wanted to visit their school sometime. When the party was interrupted by a biker gang, whose leader had been rejected by Zelda (Bobby's date earlier), Candy was impressed with the way that Warren was able to defend himself against the gang. Afterwards, Candy took Warren back to her apartment but, when he asked her for a date the next weekend, she turned him down, as she already had plans. Nevertheless, she suggested they meet again some other time. [X-Men (1st series) #31-32]

Candy and Warren continued to date, although Candy remained unaware that her new boyfriend was more than just a gifted young man – he was in fact the mutant hero called Angel. One date, however, was cut short due to Warren’s preoccupation regarding his ill father. Candy didn't mind, however, and as Warren drove her home she was sure to tell him that she had such a great time that night. However, the mood suddenly changed when an announcement over the radio reported that Warren Worthington Jr. had been murdered in his home. Candy was shocked when Warren stopped the car and ran from her, inexplicably telling her to get out of his life. Once out of her sight, Warren freed his wings and took to the skies to pursue the criminals responsible. She did not know it, but Warren now blamed Candy for the death of his father, feeling that he was with her rather than at home. Although he never wanted to see her again, the man responsible for Warren’s father’s death, a man called the Dazzler, kidnapped Candy and placed her in stasis to use against Warren.

When Warren discovered her while battling the Dazzler, who was actually his uncle, he realized that he could not let Candy be harmed. During the battle, an explosion occurred in the Dazzler's 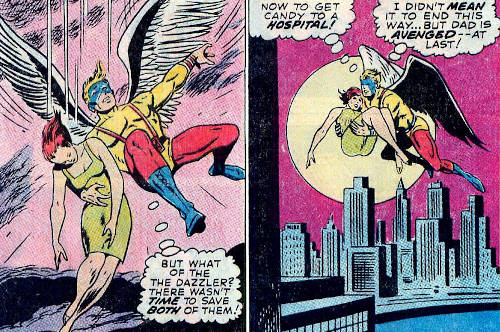 high-rise lab. Warren was able to get himself and Candy free, but Warren’s uncle plummeted to the ground below. Although she seemed unconscious as she was flown to the hospital by Warren, Candy must have regained consciousness at some point during this night, as she learned of Warren's dual identity of the Angel. [Ka-Zar (1st series) #2-3, Marvel Tales (1st series) #30]

Candy was at her expensive apartment preparing for a game of tennis when she received a call from Zelda, who told her that she thought something strange was going on at Xavier's School. Given that she wanted to visit it once before, Zelda thought Candy could make that visit now and see what might be happening. Zelda's concern stemmed from the fact that a disorientated Bobby Drake had showed up at her apartment, worried that his classmates were missing. Candy didn't seem to be concerned by Zelda's request, as by now she was well aware that Warren was the mutant Angel, and that his classmates were actually his teammates in the X-Men.

After arriving at the school and a brief encounter with a robot sentry, Candy found herself face-to-face with Charles Xavier. Although he was not happy with her being at his school, the professor found himself stymied by the young woman. Candy informed Xavier that Warren had told her everything about him, the school and the X-Men, and warned him that if he erased her mind of 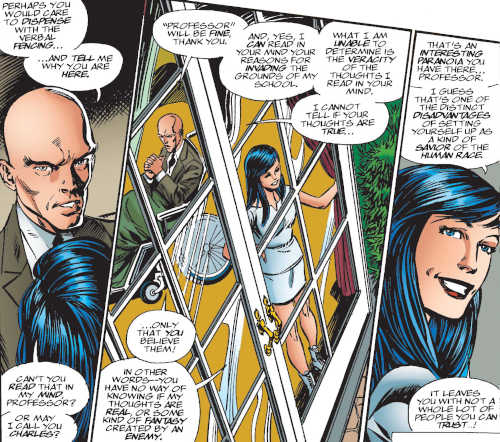 this encounter and all she knew, he would need to do the same to Warren. Candy seemed to delight in debating with the Professor, who ultimately conceded her position. Nevertheless, although he could telepathically confirm that she believed her concerns, he could not verify whether they were true or the work of a “hidden enemy.” Sarcastically, Candy told the Professor that didn't leave him with a lot of people to trust. [X-Men: The Hidden Years #2, 5-6]

Nonetheless, Candy and Charles struck up an agreement where Candy was given limited access to the School. Indeed, when she paid another visit soon after, needing to tell Warren some disturbing news, no alarms went off and the robot sentry she met on her first visit did not try to capture her. When Candy finally informed the Professor that she needed to see Warren, he replied that she wasn’t the only one searching for him. The Angel still had not returned from the X-Men’s last mission and both Cyclops and Marvel Girl, both of whom had returned, were looking for him as well. Candy reintroduced herself to Jean, who remembered her from earlier encounters. When Candy learned that Scott and Jean thought they had located Warren, she told them that she wanted to go with them to find him – the news she had for him had to come from her. [X-Men: The Hidden Years #8-10] 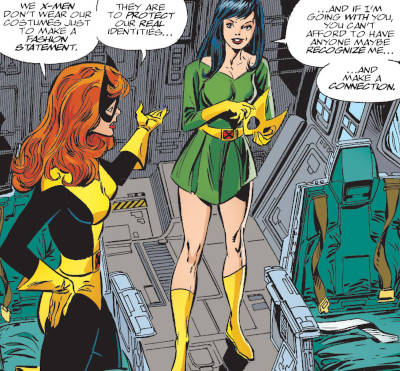 Before being allowed to accompany Cyclops and Marvel Girl, however, Candy was given one of Jean's spare green mini-dress costumes. Although she wasn't overly impressed by it, she understood the necessity for wearing the disguise.

Following a signal detected by Cerebro, Candy and the two X-Men arrived at what appeared to be an old, derelict freighter, floating at sea. The trio soon found themselves surrounded by an assortment of physically mutated people, but who seemed to be without powers. Cyclops blasted a path through the attackers and the trio continued their search. However, instead of Warren, they came across a mutant bird girl named Avia, whom the X-Men had recently befriended in the Savage Land. The trio quickly moved to free Avia but their escape was halted by a mysterious man called Krueger, who explain that he had gathered these “freaks” as he called them. Although he assured the trio that the Angel was safe for the nonce, he declined to tell them where he was. Instead, Kreger used his own powers to render the trio unconscious.

However, in truth, Candy was only feigning being unconscious and, when the opportunity arose, she knocked out the mutate carrying her to captivity and escaped. Candy found Krueger standing over Cyclops and Marvel Girl, just he welcomed the Brotherhood of Evil Mutants aboard the 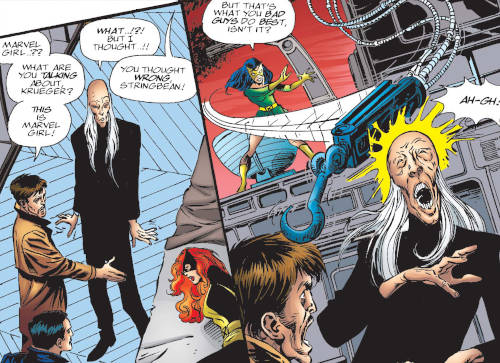 vessel, intending to sell the X-Men to the villains. Unfortunately, although Candy attempted to knock out Krueger with a blow to the head, she was quickly trapped in one of Mastermind's illusions and captured. She and the two X-Men were then handed over to the Blob, Mastermind and Unus, who placed her, Cyclops and Marvel Girl in cages, alongside the missing Angel. [X-Men: The Hidden Years #10-12]

To the amusement of the Brotherhood, Candy and the three X-Men were placed in a circus big tent, where cheering patrons watched as crazed animals and circus performers attacked the trio. To complicate matters, Cyclops and Angel's powers were not working, so Warren couldn't fly Candy to safety. Eventually, the X-Men deduced that they were still in one of Mastermind’s illusions and with this knowledge were able to fight back. Angel, however, sought to maximize Candy’s safety and placed her on top of a trapeze podium, out of the way of the battle. Just as the X-Men began making headway against the Brotherhood, Krueger returned, angry that the money he had been paid by the villains was merely another of Mastermind’s illusions. However, this time, Candy came to the rescue, swinging down from a rope ladder and knocking out Krueger with a kick to the head. With their powers back, the X-Men finished off the Brotherhood and were then able to convince Krueger’s “freaks” that they were better off without him. 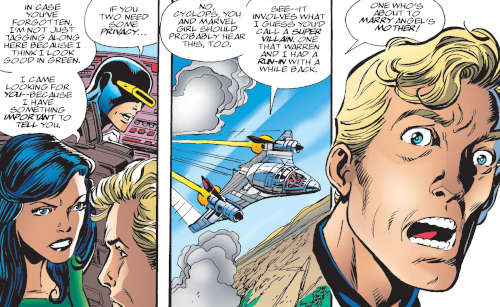 The crisis passed, Candy and the X-Men returned to their jet, where Candy was a little taken aback at the way Avia threw herself at Warren. Nevertheless, Candy was finally able to tell Warren the urgent news she had for him – that the villain they had a run-in with a while back, the Dazzler, was about to marry his mother. [X-Men: The Hidden Years #13-14]

After a brief return to the School and reunion with Beast and Iceman, the X-Men changed into their civilian identities and departed for Worthington Manor, accompanied by Candy. Along the way, the pair recounted their earlier dealings with “Uncle Bart” as the Dazzler and his apparent death. Although Warren was clearly distraught over his mother's impending marriage to his evil uncle, he was cautioned against telling her that her brother-in-law was responsible for his father's death by the family doctor, who informed Warren that his mother had a serious heart condition. This, however, turned out to be a lie and the X-Men soon discovered that Warren's mother was being poisoned by Warren's uncle, with the help of the family doctor. In the end, Dazzler was defeated and Candy could only watch as Warren’s mother died from the doctor’s poisoning. Candy remained with Warren when the authorities arrived to take Dazzler and the family doctor into custody, and witnessed as Marvel Girl’s mental inhibitors worked as intended, preventing either the doctor or Warren’s uncle from exposing any of the X-Men. [X-Men: The Hidden Years #14-16]