With the Defenders no longer a going concern, Candy and Warren remained at the New Mexico chateau, which they began to rebuild. She and Warren said their goodbyes to Iceman and Beast, who were taking the end of the Defenders as an opportunity to begin post-hero lives as civilians. Candy and Warren too seemed on the verge of beginning their own, non-heroic life together. All that changed with a phone call from Reed Richards, who had urgent news. The news was so shocking to Warren that he flew off without even telling Candy what he had learned. In the coming days, Candy would learn that Jean Grey, who had died a few years before, was in fact very much alive. [X-Factor (1st series) #1]

Although he had clearly put his days as the Angel behind him, Warren quickly threw his time and attention into his new team, X-Factor, comprised of all of the original X-Men, including the newly returned Jean. Candy began to find her relationship with Warren strained as a result and instead busied herself with business at Worthington Industries, at some point becoming a vice-president. As the weeks passed, she found Warren pushing her further and further away. On one occasion, she called Warren to discuss some important matters, only for him to inform her that she was in charge and then hang up on her. [X-Factor (1st series) #4]

Indeed, Candy threw herself into her responsibilities, so much so that she was soon appointed chairman of the board of Worthington Industries. It was while calling to order a board meeting that she was informed that a radio report had not only just announced that Warren was an evil but that Worthington Industries was backing X-Factor, which to the public’s knowledge was a mutant- 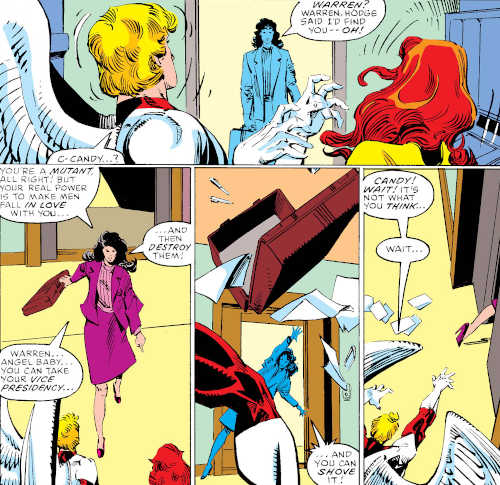 hunting business. Deciding that it was past time for a face-to-face meeting, Candy canceled the meeting and headed to X-Factor headquarters. However, just as she found him, Candy discovered Warren in an embrace with Jean. Although he had simply been comforting her, Candy jumped to the worst conclusion and tossed her papers at Warren, resigning her position at Warren Industries and storming out. [X-Factor (1st series) #10]

What Candy did next is not entirely clear but soon thereafter tragedy struck Warren. First, he lost his mutant wings during a battle with the Marauders and then apparently committed suicide in his grief. [X-Factor (1st series) #11, 17] Somewhere during this time, Candy happened upon evidence linking Cameron Hodge, Warren’s supposed childhood friend and business partner, with an unnamed anti-mutant organization. This was in fact true. Although he had been a friend to Warren since they were teens, Cameron in fact had hated Warren since learning he was a mutant and had helped him to create the mutant-hunting backstory to X-Factor in order to fan anti-mutant hysteria. Apparently gathering enough evidence to expose him, Candy reached out to Trish Tilby, a respected reporter and associate of X-Factor. Before they could meet, however, Candy disappeared, with the rest of the world simply believing that she had left town. [X-Factor (1st series) #29]

Warren had not died, however. Instead, he had been taken, brainwashed and transformed by Apocalypse into his Horseman, Death. Shortly after regaining his freedom from Apocalypse, Warren (now as Archangel) went looking for Candy one night but found her apartment empty, with appearances that she had been gone for some time. The only clue to Candy’s fate was a dart left on the floor, pointing to some unknown foul play. [X-Factor (1st series) #28]

Archangel’s investigations first led to Candy’s connection to Trish Tilby and then to Cameron Hodge. Eventually, he tracked Hodge to the Right’s headquarters and confronted Hodge, who 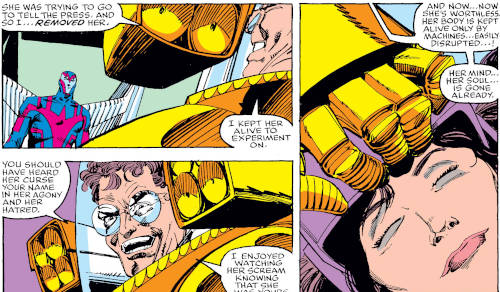 stood over the comatose Candy Southern. Hodge gloated that he had experimented on Candy, who had cursed Warren’s name in her agony and hatred. Barely surviving, her body was only being kept alive by machines. Her mind and soul already gone.

To finish his revenge again Warren, Hodge ripped the cables keeping Candy alive. In his rage, Archangel abandoned any pretense of holding back and ultimately decapitated Cameron Hodge 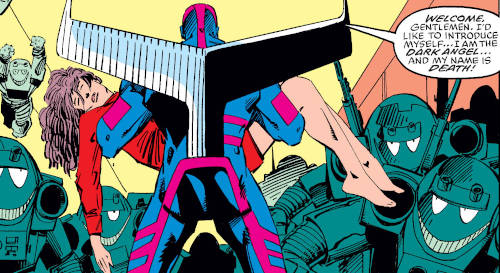 with the razor-sharp wings given to him by Apocalypse. Tragically, the battle had been long enough for Candy’s life to expire. Grieving for his former lover as he cradled her lifeless body, Archangel was left only with his wrath, which he made clear he was ready to take out on those of the Right who remained. [X-Factor (1st series) #34]

This was not quite the end for Candy Southern, however. In the months before her death, Cameron Hodge’s mania against Warren and mutants had led him literally to make a deal with a demon, specifically the demon N'astirh from Limbo. In exchange for his help acquiring infants for a spell that would precipitate the Inferno event, N'astirh offered Hodge immortality in the form of the transmode virus, which N'astirh had recently acquired. It seems that Hodge’s experiments on Candy had been with the virus, as her consciousness found its way into the network of the Phalanx, the originators of the transmode virus.

A year after Candy’s death, the Phalanx arose as a threat to Earth, resurrecting those who had previously been infected with the transmode virus. Candy Southern was among this number. However, without an understanding of how she had returned and having nowhere else to go, Candy returned to Warren’s former home in the New Mexican Rockies. By happenstance, Warren returned to his old home with Jean Grey and both were shocked to find Candy apparently very much alive.

Warren was dubious about her sudden return, thinking it a trick, but Jean read Candy's mind and confirmed that the woman at least believed she was Candy. Needing a more concrete confirmation, Jean took Warren into Candy's mind, where they were all forced to relive Candy's final moments. They discovered that her mind had not been completely destroyed when Warren found her and that she been aware of Warren’s battle with Hodge. Her next memory had been of shadowy individuals who resurrected her for some plot against Xavier, though the details of who they were remained elusive.

Suddenly, clarity came in the form of Cameron Hodge, who likewise had been resurrected by the Phalanx and even now intended to use his new chance at life for revenge against Warren. Despite his techno abilities, Hodge proved no more a match for Archangel now. Shredded badly by Archangel’s wings, Hodge suddenly triggered Candy’s own transformation into her true techno-organic form, intending to use her for “spare parts.” Now realizing what she had become, a techno-organic copy of her original self that was linked to her own murderer, Candy did the only

thing she could – she began tearing her own techno-organic form to shreds, rendering it useless to Hodge. However, Candy’s self-sacrifice had the unintended effect of doing the same to Hodge’s body via their link. Already damaged from his battle with Archangel, Hodge’s techno-organic body exploded due to the trauma.

Although the menace of Hodge was gone, Candy’s own form continued to deteriorate. Fortunately, she held on long enough for her and Warren to finally get to say goodbye to each other. As her techno-organic body died, Candy told Warren that she had never been disappointed in him and that she loved him. [Uncanny X-Men (1st series) #306]