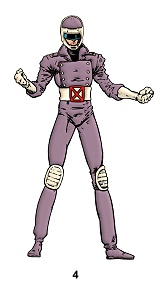 1) Hired by Donald Pierce, Cannonball shortly wore the typical outfit of an agent of the Hellfire Club: a dark blue form-fitting suit, with red boots and gloves, a red belt, red lines on the outer arms and legs, connecting gloves, belt and boots and red lines on he chest, hinting at the pitchfork symbol of the club. Sam didn’t wear the typical facial mask, though. [Marvel Graphic Novel #4]

2) After he joined the New Mutants, Sam, like all his teammates, wore the standard black and gold school uniform that the original X-Men and Kitty Pryde had worn before them. [New Mutants (1st series) #1]

3) After their traumatic experiences at the Beyonder’s hands, Sam and the other New Mutants were sent to Emma Frost for help and briefly joined their Hellions and wore their typical uniform: a tight, v-necked suit in two shades of magenta with a white triangle symbol over the heart. [New Mutants (1st series) #39-40]

4) The new Mutants weren’t meant to wear individual outfits until they graduated. They nevertheless wore this outfit, when they had to save the X-Men and in some instances after (especially as these costumes unlike their everyday costumes had masks). Sam’s uniform consisted of a grayish, double-breasted, high-collared suit, with somewhat puffy sleeves, a white studded X-belt, white gloves and shoes and a white helmet with a visor. [Uncanny X-Men Annual (1st series) #10, New Mutants (1st series) #54-55] 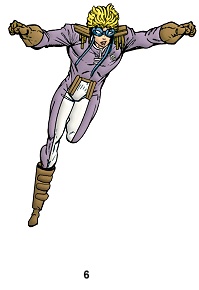 5) After the traumatic events of the Fall of the Mutants (losing their teammate Cypher and believing the X-Men dead), the New Mutants felt they had to “graduate” and become actively heroes, choosing new uniforms they more or less threw together from what they found on the attic, as they felt they could use the school uniforms of the graduating outfits designed by Xavier. Sam wore a basic blue suit with a big orange x-symbol on his chest and orange short blue pants. The uniform was completed by orange buccaneer boots, gloves, a red belt and a blue mask. [New Mutants (1st series) #61]

6) Right after the New Mutants joined with X-Factor’s charges – the X-Terminators – and Cable, they felt new costumes were in order. Based on a design by Boom-Boom, the new suits were still individual, yet contained similar elements. Sam’s outfit was a gray suit, white on the inside of the thighs (as all of the costumes were), with a loose collar and a small x-symbol on the chest. The suit was adorned with brown stripes on the shoulders and on the waist (instead of a belt) hinting at a military look. High brown boots with vertical silver stripes, buccaneer gloves and aviator goggles completed the ensemble. [New Mutants (1st series) #90]

--) When the team renamed themselves to X-Force, Cannonball modified his costume a little bit. He wore a jacket above it and shorter gloves. [X-Force (1st series) #1]

7) After Boom-Boom got her hands on the Shi’Ar clothing machines at the X-Mansion (and most of X-Force’s clothes were in tatters), she designed her teammates another set of rather colorful outfits. Sam’s outfit was a primarily dark blue high-collared suit, which had broad yellow padded stripes going up from the boots to the armpits and from shoulders to gloves. The look was completed by brown boots and gloves, a brown utility belt, goggles and a tiny red x-symbol on the chest. [X-Force (1st series) #19]

8) When Sam was invited to join the X-Men, he got another outfit. A basic blue suit with yellow short pants, yellow buckled gloves and boots and a golden harness with a red X-symbol across his chest. In fact, the suit was very reminiscent of Cyclops’ uniform. [X-Force (1st series) #44] 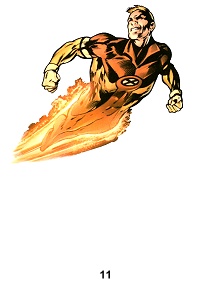 9) Under the leadership of Cannonball and Pete Wisdom, X-Force eventually took a darker turn as the team got embroiled in black-ops operations. This was reflected in a darker look. Sam wore tight, black leather pants and broad black suspenders over a brightly orange shirt. Over the shirt, he wore a roomy, black fur-trimmed aviator’s leather jacket with red x-symbols on each upper arm. He also grew a goatee. [X-Force (1st series) #102]

--) As a member of the X-Corporation, Sam’s outfit consisted of black leatherpants, a padded black leather jacket with small, yellow x-symbols on the upper arms and a huge x-symbol on the back, combined, as so often, with a pair of goggles. [New X-Men (1st series) #128-130]

--) When Sam joined the X-Treme X-Men, he returned to wearing a fur-trimmed aviator’s leather jacket like before, shortly before X-Force disbanded. [X-Treme X-Men (1st series) #25]

10) As the team started wearing more street-clothes like clothes, while keeping a certain uniforms style black leatherpants and a matching sleeveless vest, both padded and with red lining. In addition he wore `Doc Martens' like boots and short black gloves. [X-Treme X-Men (1st series) #33]

11) Cannonball’s X.S.E. uniform was a departure from his standard costumes which were often bulky and in drab or standard X-Men colors. It was a predominantly red suit, with the red combined with gold forming an x-pattern on the torso and upper legs. It has a red collar an black and gold X-symbol on the chest and yellow short gloves. [Uncanny X-Men (1st series) #444]

12) When Sam rejoined his old X-Force teammates, he wore an outfit that resembles his classic purple ensemble from that era. This short-sleeved uniform was mostly purple, except for two prominent gray patches that extended from the underside of the sleeves all the way down through his sides and into the torso. He again sported his standard leather goggles and leather gloves. [X-Force (2nd series) #4]

13) After rejoining the X-Men, Cannonball adopted an entirely new look. This latest costume is a deep-purple color that borders on black. It has disc-shaped shoulder-pads, over-sized gloves, and a collar studded with thick bolts. His belt also has several thick bolts. Additionally, he sports a large “C” emblem on his chest as well as on both shoulder-pads. His gloves have buckles around the wrists, as well as two horizontal, parallel white stripes. The goggles he wears now have red lenses instead of clear ones. [Uncanny X-Men (1st series) #466]

14) Cannonball’s most recent New Mutants costume retained the elements of the classic yellow-and-black X-Men uniform, but updated them. This costume consisted of a black, long-sleeved, one-piece jumpsuit with a broad, yellow “X” across the torso that extended into the shoulders and arms. Sam accessorized this outfit with yellow boots, yellow gloves, a black “X” logo over his heart, and, as always, his trademark goggles. [New Mutants (3rd series) #1]

15) While working at the Jean Grey School for Gifted Youngsters, Cannonball wore a short-sleeved costume of black and silver. It boasted a silver chest-plate and collar, and black gloves, elbow pads, leggings, and boots. It also had silver kneepads and red goggles. This outfit was adorned with red and gold “X” logos on the upper-arms, naval, and palms. [X-Men: Legacy (1st series) #260.1]

16) Cannonball’s Avengers costume reuses many of the elements of his classic New Mutants uniform. He wears long-sleeved black underclothing with a yellow, V-shaped tunic. The tunic is outlined with a crimson border, and sports a black, stylized imprint of a fireball on the chest. Sam wears this costume with black gloves and his signature red goggles. [Avengers (5th series) #1]

17) As a member of the U.S. Avengers, Cannonball adopted a new costume somewhat similar to the classic "Rocketeer." He wore brown pants and black boots with a blue bomber jacket, sporting a furred collar and five-button breast. Under the jacket, which he occasionally left unbuttoned, was a blue shirt with a stylized yellow 'C' on the chest. He also wore black gloves and versions of his traditional goggles. [U.S. Avengers #1]