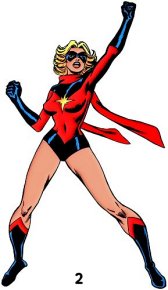 1) When Ms. Marvel debuted, she was sporting a variation of Captain Marvel’s second uniform. This red and blue number was the same as Mar-Vell’s with his distinctive yellow, eight-point star set against the red and blue bodysuit. Some notable changes were made to create a more “feminine” version of Mar-Vell’s uniform. The suit had no leggings, leaving Ms. Marvel’s legs exposed. A diamond shaped cut-out in the front and back revealed even more skin, leaving her mid-riff bare. Her boots featured a red stripe and around her neck she wore a long red scarf. A dark blue mask completed the look. This costume contained circuitry that enhanced Ms. Marvel’s strength, allowed her to fly and projected an energy field around her that increased her resistance to harm. [Ms. Marvel (1st series) #1]

2) Ms. Marvel’s second costume was a simple modification of her first, but with the mid-riff and back fully covered. By this time, the special circuitry in her original costume had been disabled and the powers it granted were transformed to Carol herself. [Ms. Marvel (1st series) #9]

3) After establishing herself as a heroine, Carol decided to start wearing a unique costume that distinguished her from Mar-Vell. This Janet Van Dyne classic consisted of a navy blue, swimsuit-style bodysuit with a golden lightning bolt motif running the full length of the suit from the high neck down across the chest and then down to her hip. Full-length, opera style gloves and high boots that came to a point at the upper thigh matched a dark blue mask like that worn with her original costume. A distinctive red sash tied at the hip completed this classic ensemble. [Ms. Marvel (1st series) #20] 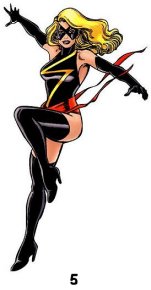 4) As Binary, Carol wore a form-fitting bodysuit in deep red with white accents. Descending from the neck was a white top that tapered to a point near the waistline and joined with a white bikini-style bottom. A pair of small crimson stars adorned the left side of Binary’s chest. The outfit was completed by white opera gloves and thigh-high boots. While fully energized as Binary, Carol’s head was surrounded by a brilliant corona of energy and flames seemed to erupt from the tops of her boots and gloves. [Uncanny X-Men (1st series) #163]

5) When Carol returned to Earth and active duty with the Avengers, she opted to wear her signature Ms. Marvel costume with the lightning bolt and red sash. When her Binary powers burned out, she adopted the name Warbird and began wearing a black version of her classic costume. Some versions of this costume had an open back, which the original did not possess. Carol briefly wore a more militaristic uniform before returning to this costume and the name Ms. Marvel. [Avengers (3rd series) #4]

6) Shortly before accepting a new role with the Department of Homeland Security, Carol adopted a more militaristic uniform. This consisted of a form-fitting, black leather body suit with short sleeves. The sides of her legs were covered by panels of white and she wore white knee, elbow and shoulder pads. Short black kid gloves covered her hands. Above her ankles were bands of white. She also wore what appeared to be a white, armored vest attached by various straps and thin black utility belts adorned her waist. Concealing her face was a standard black mask. [Avengers (3rd series) #65]

--) Carol's DHS costume was short-lived. She soon returned to her classic costume, retaining it after she reassumed the Ms. Marvel name and throughout the rest of her career under that title. 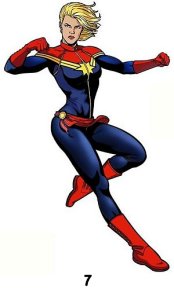 7) Upon becoming Captain Marvel, Carol adopted a new, military-style blue bodysuit covering her from the neck down. She wears a yellow "Hala star" on her chest, with golden bars tracing up to her shoulders, with the suit becoming red above the bars. She wears red gloves and highlights on her boots, as well as a loose belt on her hips with tassels and a Hala star buckle, somewhat reminiscient of her earlier Ms. Marvel uniforms. Captain Marvel also has a retractable helmet that emerges from within her costume when desired. [Avenging Spider-Man #9]

9) Following the Incursions, Carol adopted a slightly modified version of her previous Captain Marvel costume.  This iteration was somewhat streamlined with an armor-like texture to the bodysuit, shorter gloves, and red ankle guards in place of traditional boots.  Her sash was also a a slimmer cut and featured a pair of utility pouches on the right hip.  [Captain Marvel (9th series)  #1]