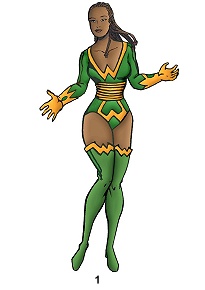 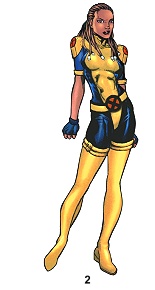 -) Being 100% adamant against being involved with the X-Men and all things involving superheroes, Cecilia did not have a uniform and simply wore normal clothing, save for a few special occasions.

1) The first uniform Cecilia ever wore was technically a joke. While searching for the injured Wolverine, Beast gave Cecilia a spare costume from the closet of the Wasp, longtime Avenger and fashion designer. The rather outdated uniform was a green full-sleeve top with the neck cut into the shave of a W, spelled in yellow. In addition, the uniform had a green hot pants and green hip boots that went all the way up to her knees, both with gold trim. The boots also contained golden W’s. Needless to say, the uniform has never been seen again. [X-Men (2nd series) #75] While the Wasp has never been seen wearing this outfit herself, she wore one of the same design, albeit in a different color scheme. In her case, the outfit was orange, with tan applications. [Avengers (1st series) #170]

2) Even though she left the X-Men to set up her practice in Salem Center, Cecilia took along one of the X-Men's basic blue and gold training uniforms, as she would help out the team from time to time. She later wore it again when she was going cold-turkey to get over her addiction to Rave. [X-Men Unlimited (1st series) #24, Uncanny X-Men (1st series) #389]

-) After rejoining the X-Men in Utopia Cecilia took to wearing a variation of her blue and gold X-Men uniform. When she wasn't serving as a field team member she was often found in the lab wearing a white doctors coat and civilian clothes. [Uncanny X-Men (1st series) #541]