Shakti Haddad was born the daughter of Zail Haddad, international czar of the Red Market. Organ harvesting and gene-splicing Bio-Shops were a grotesque but everyday part of life in the late 21st century, and Zail's Golden Harvest Corporation was very efficient in turning flesh into money. Shakti was groomed from an early age to take over her father's business. One of her earliest memories was when she was six years old and locked inside her father's laboratory with the preserved and dismembered bodies he profited from. She was terrified that soon she would die and her father's men would come and cut her open and market her organs, because that's what happens when you're dead. [X-Men 2099 #25] 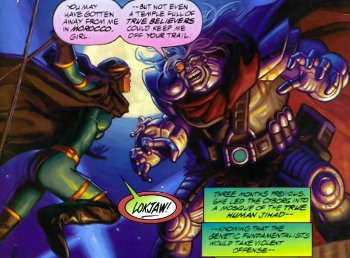 By her late teens, Shakti openly rebelled against her father and ran away from home. In 2090, she was dodging cyborg trackers in Hong Kong when one named Lokjaw cornered her at the waterfront. She was saved by the intervention of Ryu Kobalt, a handsome mercenary in the employ of Feng Huang, the Red Dragon of the East. Huang was a business rival of Zail's and enjoyed taking even the slightest advantage over her opponents. Because of this, Huang had Ryu offer Shakti sanctuary and protection in Hong Kong, which Zail could not violate without risking war with the Red Dragon. Shakti and Ryu grew close in the time she spent in Hong Kong, and fell in love. Ryu eventually broke off their relationship, however -- he was dying of a degenerative disease to which there was no cure. Determined to live out his final days alone, Ryu left Shakti in Hong Kong and went out into the world to meet his fate. [X-Men 2099: Oasis]

Shakti's heart was broken by Ryu's departure and she decided never to let herself feel anything again. She eventually accepted a job at Stark-Fujikawa in their medical program, specializing in traditional medicine and bio-engineering. It was there that Xi'an Chi Xan first found her. Xi'an was a born-again gang leader turned mutant activist, who had almost been a Bio-Shop victim himself as a child. He wanted to stand up for the basic human rights of the credit-less in Post-Corporate America and re-establish a mutant community under the venerated title of "X-Men." Intrigued by Xi'an's ideals (for the people he intended to help were the same ones butchered by her father on the Red Market), Shakti agreed to leave Stark-Fujikawa and help him on his quest.

Shakti's own mutant abilities made her a major asset to Xi'an's activities. She possessed a unique neurological sensitivity to other mutants, allowing her to locate them from a distance and determine the extent of their powers. One of Shakti's first recruits, Meanstreak, took to calling her "Cerebra" due to her mutant-tracking skills. [X-Men 2099 #3] Not all of Cerebra's recruiting missions were fruitful, however. On one search, she found a mutant boy named Norman trapped in a transmorphed form as a hideous freak in a carnival sideshow. She tried to help him reactivate his ability to change back to normal, but Norman ended up stuck in a different monstrous form altogether. On another occasion, Shakti's dreams seemed to lead her to a large congregation of mutants. In fact, she found an isolated western town that had been murdering mutants for decades to appease the "Overseer," a run-down Sentinel robot using the humans to carry out its prime directive to kill mutants. The "dreams" Shakti experienced were the haunted spirits of countless dead mutants psychically crying out for revenge. Cerebra managed to defeat the broken Sentinel and left the town to stew in their guilt for decades of senseless murder. [X-Men 2099 Special #1]

Mutants were not the sole focus of Xi'an's message -- he and Shakti spread the word in the Southwest United States and began hosting gatherings at the Nuevo Sol Arcology, an abandoned commune retreat in the desert. The gatherings were designed to provide a sense of community for all members of society who fell through the cracks, becoming chattel for the MegaCorps, the Syndicates and the Red Market. They proved to be exactly when the downtrodden needed, and hundreds of citizens flocked to the Arcology in the six months the gatherings were held. As the gatherings grew, so did the X-Men. After Xi'an's old comrade Junkpile joined them, it was Shakti and her abilities that populated the rest of the roster. By the time she found Timothy Fitzgerald in Kingman, Arizona and invited him to the gatherings, Xi'an had established a core group of X-Men for security and recruiting missions around the Arcology. 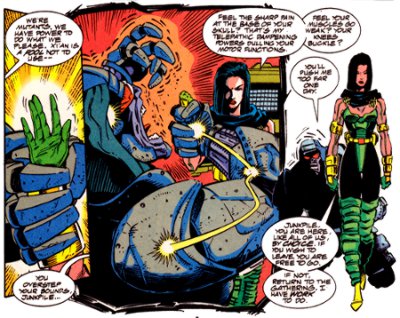 Despite the new mutant brotherhood growing around them, Shakti found Xi'an's friend Junkpile tiresome. An outlaw and mercenary, Junkpile rode with Xi'an in the Lawless, but had little use for his current crusade. Cerebra had to shut him down more than once with her neural powers when Junkpile became too aggressive. On the night Fitzgerald arrived at the gatherings, the entire operation went south. Junkpile sold them out to the Greater Nevada Syndicate of Las Vegas, and an assassin nearly killed Xi'an with a sniper's round while he was addressing the crowd. Xi'an was shot between his shoulder and chest, and Syndicate goons arrived in force to break up the gathering. Shakti needed time and space to treat Xi'an's wounds, which the X-Men found at the abandoned Hoover Dam. Unfortunately, Xi'an's condition took a startling turn when their unconscious leader started growing a peculiar shell over the wound and the rest of his body. This left Shakti unable to treat him further. 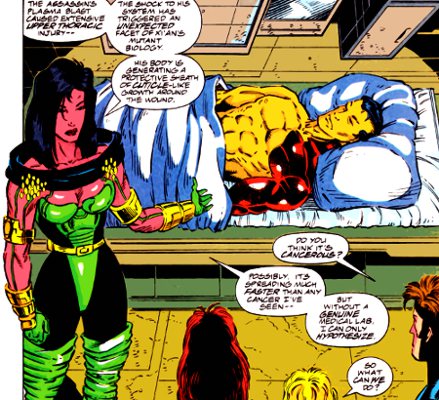 The Syndicate were after Xi'an because he allegedly killed their leader, Noah Synge. Cerebra dispatched Meanstreak, Krystalin and Metalhead to Vegas to find evidence clearing his name. Junkpile tracked the X-Men to the dam, however, and equipped himself with a psi-dampener off the black market to resist Cerebra's power. Without her talent, the remaining X-Men were unable to stop Junkpile from taking Xi'an back to the Synge casino. Realizing the other X-Men had been captured as well, Cerebra led Serpentina and Fitzgerald to infiltrate the casino. They rescued the others and used Shakti's sensitivity to track Xi'an, but were opposed by Junkpile once more. Xi'an ended up reviving himself, but not before Junkpile killed Serpentina. With Noah Synge's treacherous son Lytton identified as the real murderer and his sister Desdemona in charge, the X-Men were able to leave Las Vegas. [X-Men 2099 #1-3]

Back at the Arcology, Cerebra remarked on the work needed to restart the gatherings, but Xi'an told her the time for meetings was past. The X-Men prepared to take their mission on the road in their armored (and stealth-equipped) RV, the eXperience. [X-Men 2099 #4] The team started by searching for Mama Hurricane, a pirate broadcaster who may have been related to a woman called Hurricane that ran mutants through the underground railroad during the Great Purge fifty years earlier. Seeking information about their people's past, the X-Men traced Hurricane's broadcast to the area of Iron Horse, Arizona. The town was occupied by the Freakshow, a band of escaped DeGens on the run from the Bio-Shops. After a brief struggle, they discovered Mama Hurricane was den mother of the Freakshow, and called a truce. The X-Men helped the Freakshow defeat Bio-Shop seekers hunting them, and in exchange Mama gave them information about the Purge. [X-Men 2099 #6-8]