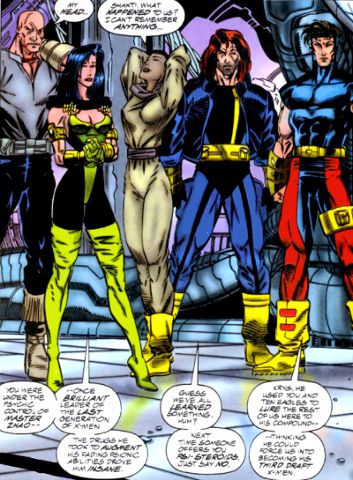 Cerebra and the X-Men next encountered Master Zhao and his Chosen at a ranch in the Sangre de Cristo Mountains. Zhao was leader of the previous generation of X-Men during the Corporate Wars. He went insane after using a psycho-active amplifier to boost his powers, and killed his own team, replacing them with genetically unstable mutants he augmented and altered to match the original X-Men. Xi'an defeated Zhao in psychic combat, but reverted to his previous sadistic biker personality in the process. He abandoned Shakti and the X-Men to pursue his own goals. Shakti refused to acknowledge the emotional consequences of Xi'an's departure, and focused on the rapid genetic deterioration experienced by the Chosen. She managed to place three of them in cryogenic suspension while searching for a cure to their overall condition. [X-Men 2099 #9-10]

Even when Tim Fitzgerald returned after a trek with Xi'an to tell the X-Men that their former leader had joined their enemies, the Theatre of Pain, Cerebra stayed focused on the medical problems of the Chosen. Tim eventually forced her to acknowledge how hurt she was by Xi'an leaving them, and got Shakti's support as he claimed leadership of the team and began planning against the Theatre. [X-Men 2099 #14-16]

Although Shakti was soon able to fully arrest the genetic deterioration of the Chosen, she wasn't allowed to savor her victory. Her genetic sensitivity woke her in the middle of the night to find that Xi'an had returned with the Theatre. Xi'an knocked her unconscious and took the bodies of Zhao and the Chosen for the Theatre. He also left behind a thermionic detonator to cover his tracks. Shakti woke from Xi'an's attack with only minutes left to evacuate the team. It was clear that Xi'an was now actively a threat to his former friends. [X-Men 2099 #17-19] 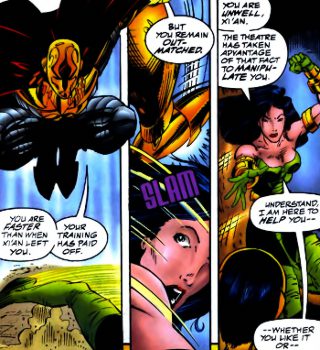 With the help of Broken Haiku, Cerebra and the X-Men tracked the Theatre of Pain to the Floodgate Bio-Resources Processing Center in Death Valley. Mingling with the hundreds of “fringers” willing to sell their bodies for credits, they attempted to infiltrate the Theatre. They were quickly discovered, however, and Shakti was separated from the others. She was confronted by Xi'an, who now served as Controller-X of the Theatre. After being captured and fitted with an inhibitor collar, Shakti was brought before the Mindfire Machine, a telepathic engine constructed around Master Zhao's comatose form. With it, Xi'an intended to unearth the psychic turmoil of thousands of refugees, turning it into a full-sensory thrill experience for the Theatre's sadistic clientele: a symphony of sadism.

Xi'an and the Theatre's chairman Brimstone Love offered Shakti a place in the Theatre due to her genius and bio-engineering skills, but she remained as repulsed by their work as she was by her father's. Shakti tried to make Xi'an see he was now exploiting the very people their gatherings had tried to save, but he shrugged off her arguments. Shakti was outfitted with neurotech receivers and seated with the other victims, forced to relive the horrors of her father's laboratories over and over. When the other X-Men intervened and disrupted the Mindfire Machine's feed, Cerebra took over and re-routed the psychic regulators, causing the entire system to overload and consume itself. With the Theatre crippled and Brimstone Love on the run, that only left Xi'an. La Lunatica subjected him to her psychic vampiric touch, breaking his defenses and shocking Xi'an back to his senses.

As Shakti helped Xi'an cope with the emotional weight of his actions, the X-Men received new direction. President Doom arrived with SHIELD to shut down the Slaughterhouse in the wake of their victory and offered to make the X-Men the Protectorate of his new venture, Halo City. Halo would become a home for the freed victims of the Slaughterhouse, as well as any other mutants or outcasts of society that needed a place to call their own. [X-Men 2099 #22-25] 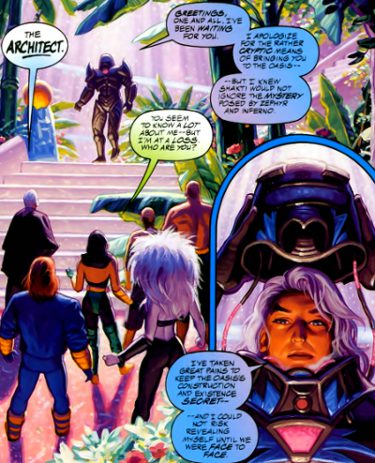 While Halo City was being engineered, Cerebra and the X-Men continued their efforts to find mutants in need of shelter or assistance after the Slaughterhouse. An elusive mutant contact continued to flutter on the edge of Shakti's mutant detection abilities, and she chased this mutant presence with Fitzgerald and Lunatica to the Kansas-Colorado border. There they found Zephyr and Inferno, two elemental beings who led them to a veritable Oasis in the desert, a self-sustaining geothermal power source and hydroponics enclave of peaceful residents. To Shakti's complete surprise, the Architect of the Oasis was her old love, Ryu Kobalt.

Ryu still suffered from his degenerative condition, using cybernetics and neural-preservative armor to stave off the effects. After overcoming his suicidal tendencies on Hellrock, he rethought his final days and decided to create a lasting contribution to civilization. Shakti was pleased to reunite with her first love, but hesitant to accept the overwhelming benevolence of Ryu's gestures. She was right to be suspicious. The Architect intended to launch Harbinger missiles to carry a short-lived retro-virus over the globe, a Cleansing that would wipe out humanity and purge the Earth for several generations so that it might heal itself from the blight caused by 2099's ten billion inhabitants. The people of Oasis would ride out the holocaust in cryonic sleep, emerging after 350 years or so to claim the world anew. 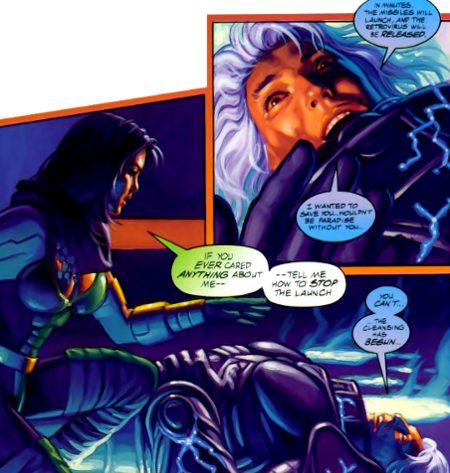 Cerebra's rejected Ryu Kobalt's twisted dream for peace, and he tried to force her acceptance by placing her in cryo-sleep with his followers. Luckily the other X-Men became suspicious as well, found Shakti and freed her. Cerebra and Ryu's friend Memphis tried to stop him, but he triggered the Cleansing before the life support in his suit gave out under their powers. Memphis ended up sacrificing his life to prevent the launch of the Harbingers, and Cerebra escaped with the other X-Men before the Oasis hermetically sealed to prevent the spread of the virus. Seeing how the dream of peaceful coexistence could be so easily twisted in Oasis, they renewed their vows to make Halo City all that it was meant to be. [X-Men 2099: Oasis]