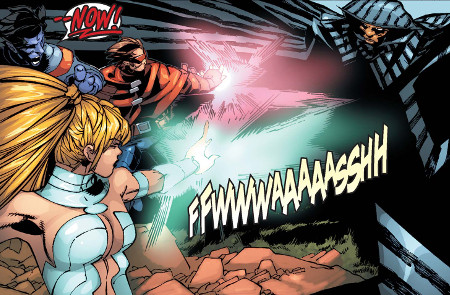 Over ten years later, Weapon Omega had risen in the place of Apocalypse and his geneticists created the Black Legion. Containing a number of fused and altered super-beings, the Legion included a glowing figure named White Cloak, either based on Tyrone or an altered version of Tyrone himself. 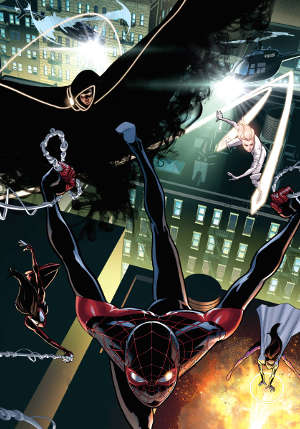 Tandy Bowen was student council president at Midtown High School in the Ultimate Universe, and a reoccurring background character in Peter Parker's life. She met Tyrone Johnson, head of the student council at Forest Hills High, during a national retreat and the two began dating. They intended to attend prom together, but a car crash left them gravely injured.

The teenagers fell into comas for several months. The RoXXon Brain Trust acquired them as test subjects and used them for experiments in dark matter, causing the couple to awaken with superhuman powers. As Cloak and Dagger, they encountered Miles Morales as Spider-Man while they pursued a vendetta on RoXXon. After Galactus' attack on Earth, they joined the All-New Ultimates with Miles, Black Widow, Kitty Pryde, and another of RoXXon's experiments named Bombshell.

In Earth X, Dagger grew old after the death of Cloak. She didn't forgive herself for his passing and lived on the street with his old cloak to keep her company. The remaining members of Power Pack

attempted to take the cloak from her, only to be swallowed in its dark folds. The reborn Mar-Vell approached Tandy and gave her comfort. Since he existed both on Earth and in the Realm of the Dead, Mar-Vell could tell Tandy that Tyrone was safe and though of her often. Mar-Vell took up the burden of the cloak for his own quest, and this allowed Dagger to move past Cloak's death, somehow regaining her youth and light powers and she did so.

In the House of M, Cloak was a close associate of Luke Cage and a member of his underground resistance to Magneto and mutant rule. Cloak's teleporting powers made him integral to the guerrilla tactics used by Cage against the humans' oppressors. When Wolverine and the other heroes who remembered the original reality surfaced, Cloak and Cage assisted them in a strike against the House of Magnus that forced Wanda Maximoff out into the open and ultimately reversed her reality warp.

A time-travelling villain named Chronok staged a massive assault on the Heroic Age, wiping out over 90% of Earth's superhumans in a matter of hours. Cloak was killed in the early stages of the assault while Dagger met up with the few surviving and obscure superhumans like Darkhawk, 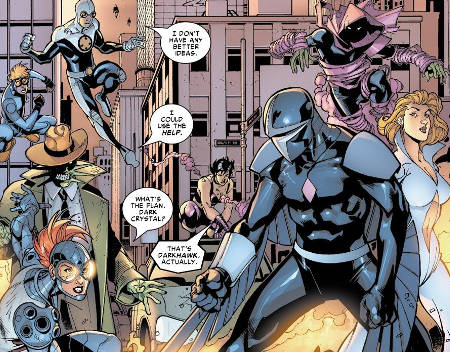 Speedball, X-23, Gravity, Sleepwalker, and Terror. In a fight with Chronok they stole his chronometer and decided to jump into the future to prevent his attack from ever happening. This "League of Losers" arrived in the year 2099 a month before the chronometer indicated Chronok first departed his timeline. They joined forces with Mutant 2099 and the disembodied brain of Reed Richards to prepare for Chronok's attack. The group was successful in preventing the future despot from stealing Reed's chronometer in the first place, thus undoing his strike on their timeline. Unfortunately, this meant that the League were now "temporal orphans", doubles of their present day counterparts who continued to exist in the Heroic Age now that Chronok's attack never took place. Dagger and the others made a new life for themselves in the future, and Tandy grew closer to the team's chosen leader, Darkhawk.

In the Mutant X universe, Cloak and Dagger were members of an underground society of mutants known as the Outcasts, similar to the Morlocks. Their interactive mutation reached the point where Cloak's body was failing and he wanted to die, but Dagger absorbed Tyrone and his powers into herself. This caused him to live on inside her, and the partners became as shadow and light cohabitated in one being. Dagger led the Outcasts in capturing Gambit of the Six, who had once betrayed them to an unknown assailant, in events that seemed similar to the Morlock Massacre. His teammate Bloodstorm challenged Dagger's authority and so the two women faced off in a duel for Gambit's fate, mirroring the fight Storm once had with Callisto. Bloodstorm won and Dagger tried to end her life, as Cloak's suicidal urges still existed within her. The other Outcasts refused to let the symbiotic duo die, however, and pulled them away into the darkness.