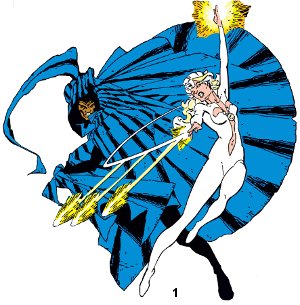 1) Cloak is primarily defined by his cloak, a length of blue-black cloth used to contain the Darkforce void generated from his body. Whether or not his body is substantive underneath that cloak varies over time. When it is, his body is covered from the neck down with a skintight black body suit. His face is always uncovered.

Dagger wears an extremely tight, white costume that hugs her entire body. The most prominent feature is a slit cut down the front of the suit shaped like a large dagger, exposing her from clavicle to belly button and strategically cupping around her breasts. She has a thin white circle or crescent around her right eye, occasionally glowing or three-dimensional thanks to her powers. Dagger also has white dagger earrings and a golden necklace. Instead of gloves, her bodysuit stops at the wrist with a sharp point extending over the back of her hand and between her second and third fingers. 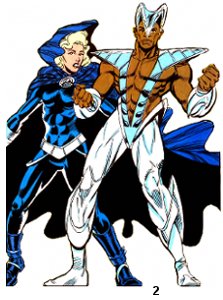 2) D'Spayre once showed Cloak and Dagger the powers and costumes they were meant to have if he hadn't intervened on their lives. Tandy, as Cloak, wore a black body suit with tangible boots, belt and gloves underneath the traditional cloak. Tyrone, as Dagger, wore sharp-edged white pants with tall pointed boots and open metallic gauntlets. He was shirtless, but wore a set of epaulets bound to his waist by two strips, and a head sock with exaggerated metal crests. 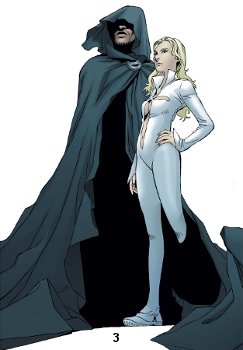 3) After resetting to their traditional power types, Cloak and Dagger slightly modified their costumes. Cloak was mostly the same out of necessity, although he now sported a new clasp holding his cloak around his body, as well as a goatee. Dagger adopted a more modest version of her old costume, closing off some of the fabric on her chest while still evoking the falling dagger image. She also added a flared collar and bellbottom style leggings, with more practical sneakers on her feet instead of her body stocking. 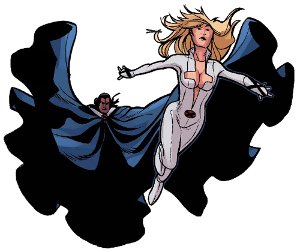 4) As members of the Dark X-Men and later the traditional team, Cloak and Dagger performed minor modifications to their costumes to fit the brand. Cloak adopted a classic X-Men symbol (a black 'X' on a red circle) as a clasp for the front of his cloak, and an enormous white 'X' extending from his shoulders over the entire backside of his cloak. Cloak also began dropping his cloak more often to leave his head exposed (possibly a PR recommendation by Osborn's people) and wore his hair longer and in dreadlocks.

Dagger wore an amalgamated version of past costumes, using the sneakers and open pants and gloves of her previous costume, but restoring the fully exposed plunging dagger cut out of her costume. The dagger now pointed at a red and black 'X' symbol at her belt. She also wore blue-black 'X's on the end of her sleeves and bell bottoms. 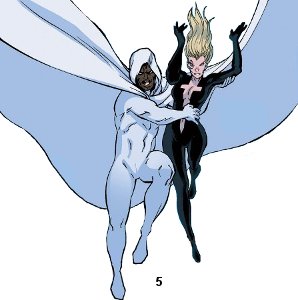 5) Under the influence of Mr. Negative, Cloak and Dagger inverted their powers and costumes. Dagger adopted her classic costume all in black, with a darkened crescent around her eye as well. Cloak's cloak was recolored pure white, glowing with an internal white light instead of a void of darkness.