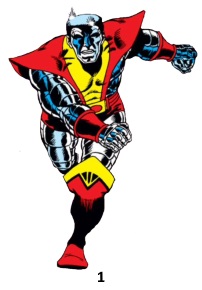 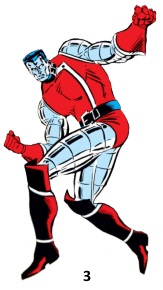 1) Colossus’ first costume was designed by Xavier and given to him when he was recruited as part of the second generation of X-Men [Giant Size X-Men #1]. It contains a pair of blue paints but, as the costume is made of unstable molecules, they vanish when he transforms into steel. Colossus returned to this classic look several times.

2) Shortly after the X-Men returned from the Secret Wars, Colossus decided to try out a new look. [Uncanny X-Men (1st series) #184]

3) Shortly afterwards, he tried out another costume. This one alluded to European military uniforms.

-) Apparently Colossus didn’t feel comfortable with either one, as not much later he returned to his original costume. [Uncanny X-Men (1st series) #210] When he later rejoined the team (after recovering from severe injuries) during an emergency, he was actually fighting in his underwear, as his civilian clothes tore apart when he transformed into steel. [Uncanny X-Men (1st series) #225] 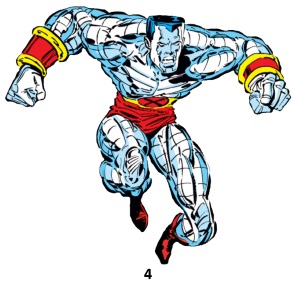 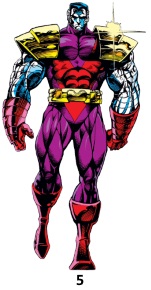 4) When the team was living in the Australian outback, Colossus just wore pants, boots and two armbands, all made out of some metallic substance.

5) This is a costume that Colossus wore as one of Magneto’s Acolytes. All have a similar design, though sometimes the color scheme is purple and red, while other times dark-blue and red. He occasionally wore a dark blue cape too. [Excalibur (1st series) #71] 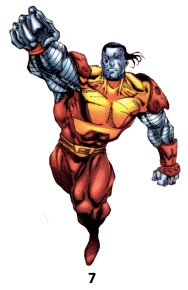 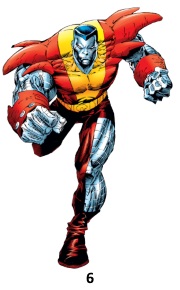 6) Shortly after the fall of Avalon, which was the Acolytes’ base, Colossus wore a new costume, which he wore when he came to join Excalibur. [Uncanny X-Men (1st series) #325]

-) After Excalibur disbanded, Colossus, like some of his teammates, rejoined the X-Men and returned to his classic look [Uncanny X-Men (1st series) #360]

7) In the following months, the X-Men adopted some sort of team look. Each costume had a big X across the chest area and Colossus’ had shoulder pads similar to Nightcrawler’s. Otherwise, the suits were still individual and came in different colors. [X-Men (2nd series) #100] 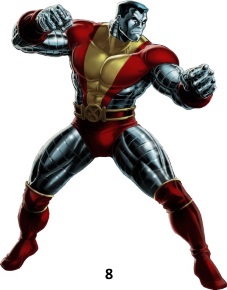 8) When Colossus was saved from Ord’s captivity and returned to the X-Men, he wore a uniform that was very similar to his original look. Keeping the same color scheme of red and yellow, he removed the shoulder-pads to give his look a sleeker feel. [Astonishing X-Men (3rd series) #7]

9) When the X-Men reformed in San Francisco, Colossus took the opportunity to update his look once more. Staying with the red/yellow scheme, his arms were totally uncovered, whereas he ditched his briefs in favor of pants that completely covered his legs. [Uncanny X-Men (1st series) #500) 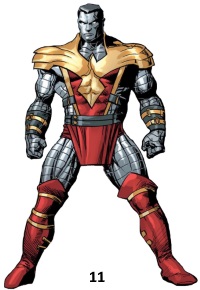 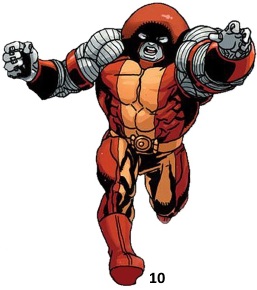 10) When Piotr became the avatar for the demon Lord Cyttorak, his look altered slightly. Whilst the main uniform was very similar to his previous design, it was augmented by the Juggernaut helmet that would manifest itself when activated. The more Piotr gave in to Cyttorak’s influence, the more demonic he became as numerous horns and spines would jut out from his body. [Uncanny X-Men (1st series) #542]

11) When he was possessed by the Phoenix Force, Colossus’ costume altered dramatically by having a large, gold Phoenix symbol cover his chest and shoulders. He wore a red loin-cloth with a number of belts and buckles, holding the various aspects of his costume together. He wore knee-high red, black and gold boots and, for the first time in a long while, he ditched his red gauntlets, opting for black bracers on his arms instead. [Avengers vs X-Men #5] 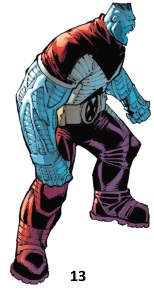 12) After the Phoenix Force left him, Colossus’ powers went haywire and he randomly changed parts of his body to organic steel. Cable had a suit made that stabilized the transformation and allowed Piotr to change at the push of a button. The look was a dramatic change from his usual costumes, as he wore a full, orange and black bodysuit that only exposed his arms. The button that controlled his powers was on the torso for ease of access. [Cable and X-Force #1]

-) After rejoining the X-Men, Colossus went back to wearing a costume that was very similar to his first ever costume.

13) After joining the X-Men in X-Haven, Colossus drastically updated his look to suit his new outlook on life. He wore a full-length body suit that was dark red with a large, white, X-shape across the chest and back. As well as his usual red gauntlets, he also wore a yellow belt with pouches and an X-buckle on it. [Extraordinary X-Men #1]