Born on the Ust-Ordynski Collective farm in Lake Baikal, Siberia, to Nikolai and Alexandra, Piotr Nikolievitch Rasputin is the younger brother of Mikhail. While Piotr was still a teenager, Mikhail became a Russian cosmonaut. When it was discovered that Mikhail was a mutant with the ability to warp energy, the State staged his death in a space launch, letting his family believe he was dead so that they could better explore Mikhail’s powers and, at the same time, shield him from outside influences. Eventually, Mikhail and his crew traveled into a dimensional void, not to be seen again for years. It was only after Mikhail‘s “death” that the Rasputins had a third child, a girl who was named Illyana. Piotr tried to be there for her as an older brother, just as Mikhail had been to him, and nicknamed her “little snowflake.” [X-Men (1st series) #99, Uncanny X-Men (1st series) #285-286]

In the following years, Piotr found out that he was a mutant, with the ability to turn into organic steel. His father had trouble accepting his son was a mutant and so Piotr used this power rarely on the family’s farm. Life on the Collective was hard and, to make things worse, Piotr’s father was being blackmailed over his son’s condition. A strange, tattooed man came to their house one night and told Nikolai that, unless a weekly contribution was paid, the government would find out about Piotr’s mutant status. Piotr watched helplessly as his father was forced to give some of his hard-earn money to the man in a bid to protect his son.

One day, however, Piotr spotted a runaway tractor racing towards Illyana, who was playing in the fields. Transforming into his steel-form, Piotr grabbed Illyana, but couldn't get out of the way in time. Instead, he simply stood still and let himself be hit by the tractor, which crumbled before his strength. Professor Charles Xavier, who had come seeking Piotr, witnessed this incident and asked Piotr to join his new team of X-Men to save the original team from Krakoa, the living island. Piotr joined the team as Colossus, along with the African Storm, the Canadian Wolverine, the Japanese Sunfire, the Irish Banshee, the German Nightcrawler and the Native American Thunderbird. Leading them was Cyclops, the only member of the original team to have escaped. This new team succeeded in rescuing the X-Men from Krakoa and afterwards, the original team left to allow Xavier and Cyclops to train these new X-Men. [Giant Size X-Men #1, Uncanny X-Men (1st series) #504-505, Extraordinary X-Men #1] 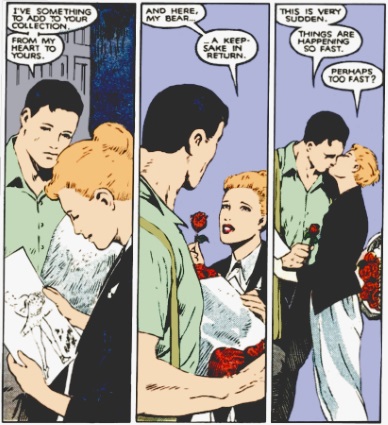 Piotr had a hard time adjusting to living near one of the biggest cities of the world. In the Ust-Ordynski Collective, he had known everyone by face and by name but New York, with its eight million inhabitants and tall skyscrapers, was almost beyond his belief. From time to time, he visited the area called "Little Odessa," to hear his native tongue, taste the food and experience the land and people he missed so much. During one of these occasions, he witnessed a Russian girl being kidnapped. Piotr transformed to steel and intercepted the kidnapper’s car, freeing the by then unconscious young woman. It turned out that she was Anya Makarova, a ballerina who had defected to the US, though her father sent those men after her to bring her back. Talking about their different world views and what it means to be a true artist and later seeing her perform, Piotr fell in love with her and she seemed to respond. However, later when she was again attacked by her father’s men and Piotr transformed into Colossus right before her eyes to deal with them, Anya was rather shocked and felt deceived by him. She accused Piotr of lying and, before running out on him, claimed that a man of steel could not have a heart. Piotr thought long and hard about what she had said but then decided she was wrong and moved on. [Classic X-Men #5]

While celebrating their first Christmas with the X-Men, Piotr met an attractive flight-attendant named Betsy Wilford and they often double-dated with Nightcrawler and Betsy’s friend, Amanda Sefton. However, while Kurt and Amanda started a full relationship, Betsy and Piotr were nothing more than close friends. [X-Men (1st series) #98]

During a time when the X-Men were visiting a native tribe in the Savage Land, Piotr witnessed three young women being attacked by a dinosaur. He rushed in to help them but one of the savages was beyond help and died of her injuries. Later that night, after the victim was buried, 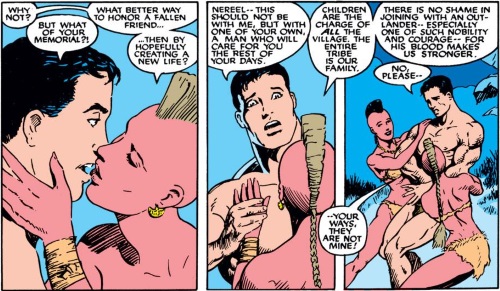 the other two women, Nereel and Shakani, approached Piotr to join them in a final ritual. They took him to a small island, where they started to kiss him. Colossus was confused, but Nereel explained that her tribe believed the best way to honor a fallen friend is to create a new life, especially with such a strong and noble outlander to bring new blood into their tribe. At first, Piotr tried to resist, but the two ladies did not back down from their intent and finally he gave in and made love for the first time in his life. [X-Men (1st series) #114, Classic X-Men #21] 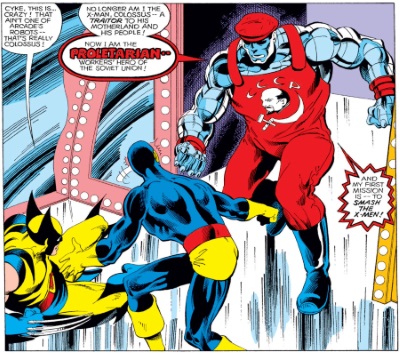 Back in the US, the X-Men were kidnapped by Arcade and trapped in his Murderworld where they had to fight for their lives. Colossus found himself in an interrogation room, where he was brainwashed by an imposter Colonel Vazhin into becoming the Proletarian. In this new role, Piotr attacked his teammates, as he considered them enemies to his native Russia. Only after he nearly strangled Storm and Cyclops did Colossus snap out of the conditioning. [X-Men (1st series) #123-124] Betsy and Amanda, who were out on a date with Piotr and Kurt when they were captured, ended up in Arcade’s captivity too but were rescued by the X-Men. Shortly afterwards, Betsy and Piotr stopped seeing each other, though it is unknown whether it was because of the danger she had been exposed to or other reasons.

Piotr experienced numerous doubts about his life as an X-Man and, at one point, decided to visit his family, unsure whether he would return to the team. Back in Russia, Illyana was pleased to see her brother again, who apologized for not writing as much as he had intended. It was not because of him not wanting to, but he could not find the right words to describe his experiences as an X-Man. Instead, he had drawn sketches of the many strange things he had seen, like aliens, spaceships and super-powered beings. 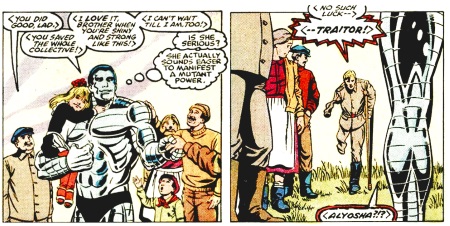 When he wanted to see his childhood friends again, Piotr learned that things had changed in the Ust-Ordynski Collective. Many of the young men had served in the war in Afghanistan and some were injured or killed in the line of duty. Even worse, they accused Piotr of being a traitor, who was not there when they needed him most. Colossus was arrested by Colonel Vazhin, who later explained that super-beings aren’t allowed to serve in the army anyway, a fact kept from the general population. He gave Piotr two options: join a Russian covert operation or leave the country and go back to the X-Men. Of course, he chose the later. [Classic X-Men #29] 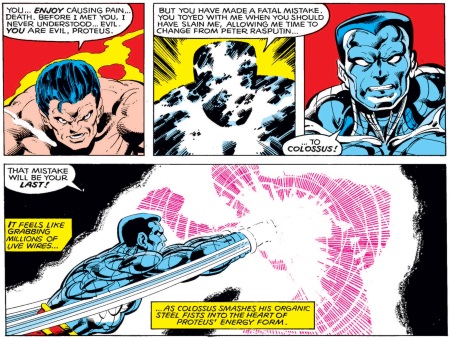 Days later, the X-Men confronted Proteus, the reality-warping son of their ally, Moira MacTaggert. Proteus was a danger to the entire world and had to be permanently stopped. Metal was an anathema to him and after Proteus had drained his latest host body, only his energy state remained. He tried to take over Colossus in human form but first wanted to toy around with him a bit. He created a simulacrum of Mikhail‘s supposed shuttle accident in Piotr’s mind’s eye. Piotr was angered by this and, switching to metal, he rammed his steel fists into the mad mutant’s heart, disrupting his energy form and killing him. The world was rid of the danger of Proteus, but it cost Piotr his innocence. [X-Men (1st series) #125-128]