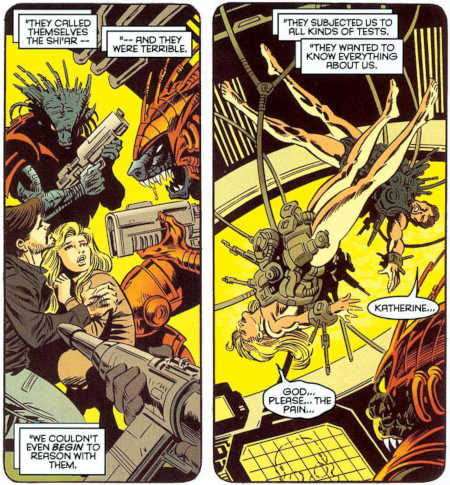 In the Age of Apocalypse reality, Corsair’s life developed in pretty much the same way, with him turning out to be a space pirate fighting against the Shi’ar. Things digressed when Corsair and his Starjammers encountered the Brood on their way to Earth. Corsair was implanted with a Brood embryo. Surprisingly, even after the transformation, Corsair was able to control his Brood side. Making it to Earth, he was captured by Apocalypse’s forces and spent five years as the guinea pig of Hank McCoy. Christopher escaped but eventually lost control of his Brood self and began killing and infecting people. Finally, he reunited with his two adult sons, Cyclops and Havok. When his human side briefly regained control, he begged them to kill him, which Scott reluctantly did. 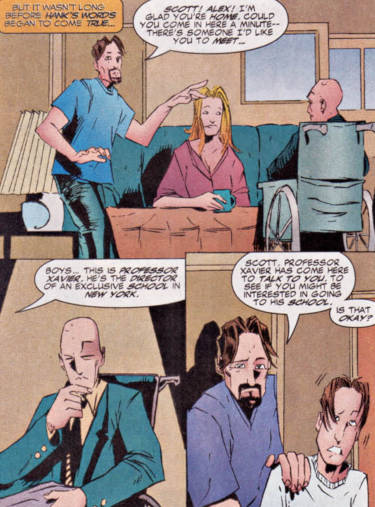 In the reality described in What if…? (2nd series) #90, on the day of the fateful flight, Katherine refused to throw Scott and Alex out of the ship with a parachute, instead trusting Chris’ abilities to fly them on the ground safely. Chris succeeded and, after this ordeal was over, he quit the space program to spend more time with his family and began working as a commercial pilot, flying supplies and charter flights out of his parents’ airport. After Scott’s mutant powers manifested in puberty, Chris did his best to stand by his side and offer guidance and comfort, even bringing him in contact with Xavier. Unfortunately, in the process, he neglected his younger son, Alex, who fell under the influence of Dark Beast.