Christopher “Chris” Summers was born in Alaska and grew up in Nebraska, the son of pilot Philip Summers and his wife, Deborah. As a boy, Chris yearned to become a scientist. Like his father, he also loved flying. A huge fan of science fiction, he dreamed of one day flying to the stars, exploring unknown planets and encountering wondrous alien races. As an adult, he became an US Air Force test pilot and adopted ‘Corsair’ as his call sign, an homage to the swashbuckling novels and movies he had enjoyed as a kid. [Uncanny X-Men (1st series) #156, Classic X-Men #15] He also married a woman named Katherine Anne, with whom he had two sons, Scott and Alex. 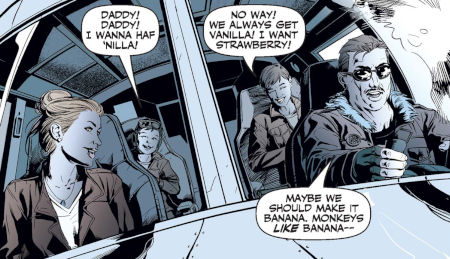 A few years later, his dream of travelling to space was about to finally come true, as he was set to join Project Mercury and become an astronaut. Just a few days prior to an important meeting with NASA, Major Christopher Summers took his two-month pregnant wife and his two sons for a camping trip with his parents to Alaska. On their way back from the trip, Chris was piloting an old de Havilland Mosquito he had rebuilt together with his father. Suddenly, south of Cape Yakataga, they received a panic call from Anchorage about an unidentified airship heading their way. Before they had time to react, the ship – an alien starship – was on top of them and opened fire. 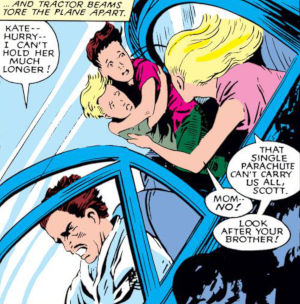 Thanks to Chris’ piloting skills, they were able to survive the attack. However, a near miss torched the fuselage and the ship was as good as done. With only one parachute on board, Katherine attached it on 6-year-old Scott who held his younger brother, Alex, in his arms, and pushed them out the hatch. Chris and Katherine watched in horror as blaster fire from the unknown ship clipped the parachute. The couple mentally prepared themselves for their own deaths, when a teleportation beam carried them aboard the starship. It was a Shi’ar scouting ship, whose crew captured Chris and Katherine, regarding them as zoological specimen, representing the most advanced life form on Earth. [Uncanny X-Men (1st series) #144, #154, #156, Classic X-Men #15, Uncanny Origins #1, X-Men Origins: Cyclops, X -Men: Prelude to Schism #3, Guardians of the Galaxy (3rd series) #12]

Once on Chandilar, the Shi’ar imperial throneworld, Chris and Katherine were separated. Chris became a slave. Believing his two sons dead, he concentrated all his energy on escaping the slave pens and rescuing his wife and unborn child. Indeed, he succeeded in escaping and discovered Katherine in bed together with the Shi’ar emperor D’Ken, who apparently kept Katherine as his concubine. Chris tried to intervene but was immediately apprehended by guards. D’Ken announced that the penalty for his crimes would be death by slow torture. However, the 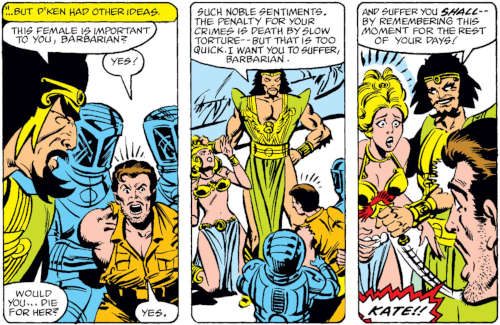 sadistic emperor wanted him to suffer more than that and proceeded to mortally stab Katherine, ripping the fetus from the dying woman’s womb before Chris’s unbelieving eyes. Unbeknownst to Chris, the barely alive newborn survived and was placed in an incubation-accelerator, a common practice for slave breeding among the Shi’ar, where he grew to suitable slave age in just six months. [Uncanny X-Men (1st series) #156, X-Men: Deadly Genesis #6, Uncanny X-Men (1st series) #477] 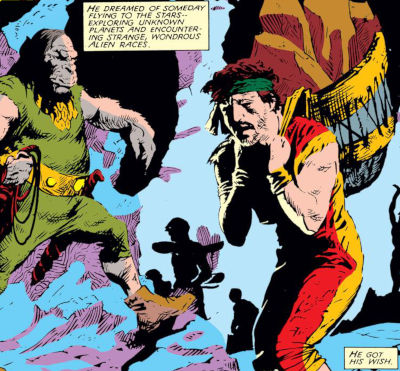 The now widowed Chris was sentenced to the mining pits of Alsibar. One day, he saw a prison guard abusing a female, feline-like prisoner and tried unsuccessfully to intervene. After the prisoner (later nicknamed ‘Hepzibah’) was removed from the premises, two other alien prisoners, Raza and Ch’od, who were looking for Hepzibah, approached him. Chris presented such a sorry sight that Raza briefly considered putting him out of his misery. Nevertheless, Chris followed Raza and Ch’od and helped them set Hepzibah free. After Corsair rescued her, Hepzibah licked his wounds as a sign of gratitude, sealing the lifelong bond between them.

The three aliens planned to escape and Chris offered to join them. The foursome departed on a Shi’ar ship called the Starjammer. Naming themselves ‘Starjammers,’ they became space pirates and made it their life’s mission to fight the Shi’ar Empire. Chris and Hepzibah also became lovers. Predictably, Chris adopted the alias ‘Corsair’ and eventually established himself as the team leader. By his own admission, the Starjammers back then were naïve enough to believe they could really make a difference in the galaxy. [Uncanny X-Men (1st series) #156, Classic X-Men #15] However, the team also proved to be inexperienced in those early days. For example, at one point they set up camp at the water-based planet Aquanox. Running out of food supplies and naively believing that the planet would be teeming with edible fish, they went fishing underwater only to discover that the indigenous marine life was extremely dangerous and hostile. [Uncanny X-Men (1st series) #391]

Corsair and the Starjammers spent the next several years flying around the galaxy and fighting the Shi’ar. In the meantime, D’Ken’s insanity grew ever worse, to the point where he began threatening the fate of the universe itself, as he intended to tap into the power of the M’Kraan, an omnipotent crystal, which functioned as a doorway to all possible realities and which needed to be kept closed at all times. In an attempt to prevent the impending Armageddon, the Starjammers allied themselves with Lilandra, D’Ken’s younger sister who had openly rebelled against him. Corsair felt obliged to try to save the universe. However, he didn’t necessarily expect his teammates to follow along. Even so, the Starjammers followed their leader. [X-Men (1st series) #104, Classic X-Men #14] 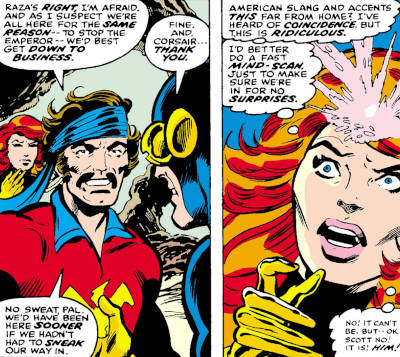 During the conflict, Corsair was introduced to Lilandra’s Terran allies, the X-Men, unaware that he was meeting his now adult son, Cyclops a.k.a. Scott, for the first time in almost twenty years. Upon hearing his heavy Nebraska accent and American slang, Phoenix telepathically probed Chris’ mind and was shocked to discover his relation to Scott. [X-Men (1st series) #107]

In an attempt to stop D’Ken’s catastrophic plan, the X-Men and Starjammers found themselves inside the M’Kraan. The crystal lashed out at them with a nightmare force field, forcing everyone present to relive their most painful memories. For Chris, he relived the moment of Katherine’s death. Phoenix decided to enter the heart of the M’Kraan in a last-ditch attempt to save the universe. Before doing so, she turned to Corsair and revealed that Cyclops was his first-born son, asking him to take care of him if she didn’t survive. Ultimately, Phoenix prevailed and the universe

was spared. However, Corsair, still reeling from the shock of the discovery, pleaded with Phoenix not to reveal the truth to Scott. Even though he was proud of the man Scott had grown up to become, learning the truth had been too painful for him. He then departed with the Starjammers, while the X-Men returned to Earth, and Lilandra was declared the new Shi’ar Empress, following D’Ken’s incapacitation. [X-Men (1st series #108]