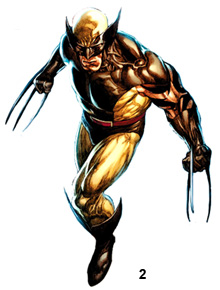 1) When first operating publicly, Daken eschewed a traditional costume, preferring to fight shirtless. In addition to not allowing anything onto which an enemy might grab hold, Daken's tribal tattoo covering his left side most likely served as a psychological intimidation.

2) Daken first donned a costume after joining Norman Osborn's "dark" Avengers as its "Wolverine." Like his teammates, who also were emulating other heroes, Daken adopted an earlier costume of his father's. The costume resembled a yellow under suit with brown trimmings over his cowl, tunic, gloves and boots. [Dark Avengers (1st series) #1] 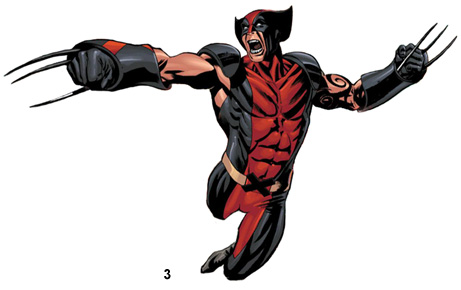 3) When Osborn supplemented his own team of Avengers with his own team of X-Men, he recruited Daken for that team as well. Part of the "dark" X-Men, Daken adopted a new "Wolverine" costume. Remaining reminiscent of his father's costume, Daken's new costume consisted of dark blue trim along his gloves, boots & sides, with a wide, reddish orange stripe running down his front and back from tip of cowl to crotch. He also wore thick gauntlets which rose to his knuckles and had a large, red "X" as an insignia. To match, he wore belt buckle with a red and black emblem, as did the rest of his team. 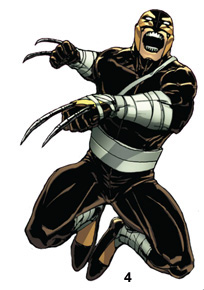 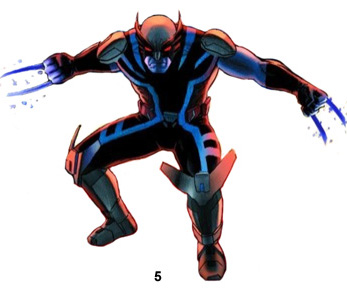 4) After faking his death, Daken adopted a unique costume which bore no resemblance to any previously worn by him or his father. Mainly dark brown, the costume had yellow trimmings around its cowl. Boxer's tape adorned his wrists, ankles and abdomen. In place of boots, Daken wore Eastern shoes reminiscent of those worn in martial arts.

5) After being resurrected by a Celestial Lifeseed, Daken was transformed into a Horseman of Apocalypse. Like those resurrected along with him, he worse a dark grey/black costume with blue trimming. The design of his specific costume bore resemblance to his father's costumes, with flared boots and cowl.