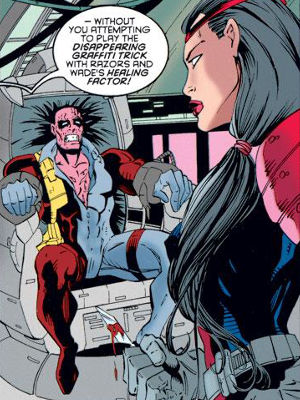 In the Age of Apocalypse, a morose Wade Wilson received the regeneration factor of Deadpool, but none of his humor. The dour Dead Man Wade was a member of Apocalypse's team of assassins known as the Pale Riders, under the command of Damask. He traveled to the Savage Land to destroy the peaceful settlement of Haven. Despite his reluctance to kill, Wade was unable to deny his orders and opposed the X-Men splinter team known as X-Calibre. He was stopped when Nightcrawler teleported his head off of his body. 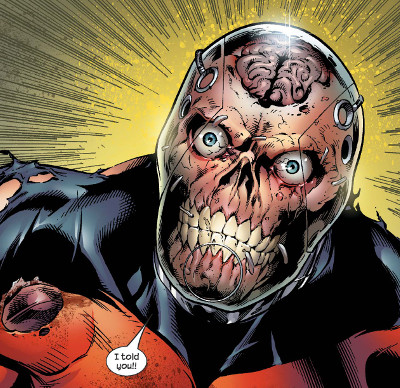 Ultimate Deadpool was no fun at all. Sergeant Wadey Wilson led a team of professional soldiers turned cybernetic assassins known as the Reavers. They kidnapped the X-Men on behalf of the island nation of Genosha, bringing them to Krakoa Island to be hunted for sport. The Genoshans aired the attack like a game show while promoting the murder and execution of mutants as less than human animals. Deadpool's mission was somewhat compromised when his team kidnapped Kitty Pryde's boyfriend Spider-Man as well, whom they hadn't planned for. Spider-Man and the X-Men eventually defeated Deadpool's troops and shut down the Genoshans' broadcast.

The Time Broker's second team of Exiles became known as Weapon X because Deadpool and all his fellow original recruits had been part of that program. Weapon X was responsible for the dirtier jobs that the Time Broker required in order to stabilize the timestream. When both teams of Exiles crossed paths on a single mission, Deadpool's neck was snapped by Sabretooth when he switched sides. He was replaced on the roster, but survived his injuries and was placed in stasis at the Crystal Palace.

After the Exiles took control of the Crystal Palace, Deadpool and Hulk from Weapon X were revived from stasis. Deadpool planned to take control of the Panoptichron from the Exiles, but Hulk smashed him instead. She just wanted to be sent home rather than play power struggle games with anyone.

After the Director of Weapon X killed most of the X-Men in his vendetta against Wolverine, Logan recruited Deadpool as part of a new, harder-hitting team of X-Men to bring the fight to Weapon X. They had success for several years until Weapon X reactivated the deep-rooted behavioral

programming in the mind of the X-Men's Agent Zero. Unable to stop himself, Zero targeted his fellow X-Men and killed most of the team in a Danger Room session. Zero's corrosive force blasts carried an enzyme specifically designed to target healing factors, and it proved effective enough to reduce Deadpool's body to nothing.

A few decades in the future, Deadpool was hired to fight in a turf war with the New Jersey Turnpike Authority. He got himself trapped inside a bunker instead, and decided to wait out the 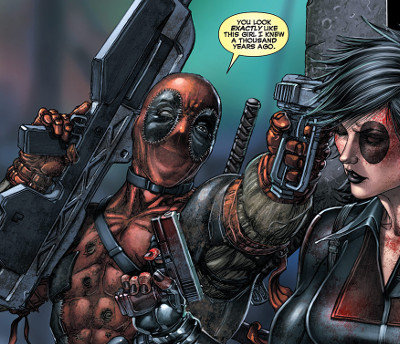 conflict. Unfortunately, Wade was unable to leave the barricaded hole in the ground when the time came. He was trapped for centuries there, unable to die while passing through periods of sanity and insanity. Wade was eventually recovered during the Age of Stryfe, a period in the 30th century where the Chaos-Bringer had killed Apocalypse and risen to command his own kingdom.

Stryfe hired Deadpool to be his enforcer and also telepathically programmed him to be loyal, but Deadpool's insanity and slippery mental patterns meant he kept forgetting his programming. He encountered time-traveling versions of Cable and X-Force in 2973 and tried to be helpful, but Stryfe's mind link meant his master had a constant peephole into X-Force's activities so long as Wade was with them.

Deadpool was one of many super-beings infected by the zombie plague that had an outbreak on Earth-2149. Zombie Michael Morbius discovered a rift in dimensions to Earth-616 in the Everglades, and Deadpool worked as his advance guard to find a whole new world filled with human food. He decimated the Florida Initiative team, the Command, but was ultimately decapitated and left to rot in the swamp. The head of zombie Deadpool eventually found its way to the Savage Land, where he was worshipped as a god by a tribe of headhunters. Deadpool-616

was sent to the Savage Land to retrieve "Headpool" as a potential bio-weapon for A.I.M., but they ended up having a series of wacky adventures instead. Headpool (or "Shorty No-Legs") mostly lost his taste for human flesh after having no body and going cold turkey. Their final adventure led to an ontological paradox as Dead and Head traveled back to Earth-2149 shortly before Zombie Deadpool first left. Zombie Deadpool's head was vaporized and Headpool was attached on the shoulders of his own past self's body. He leapt through the portal only to be decapitated by the Command again, suffering through his life from that point on in an endless loop.

Lady Deadpool was one Wanda Wilson from a reality where a new American Revolution began. She fought on the side of the rebels against General America and the establishment, mostly just because they asked. She was later recruited by Deadpool-616 into a multiversal team of mercenaries alongside Headpool, a prepubescent Wade Wilson nicknamed Kidpool or "Tito," and a dog named Wilson who was given a healing factor by a cosmetic company during animal experimentation. Dogpool, or "Cujo," rounded out the founding members of the Deadpool Corps. 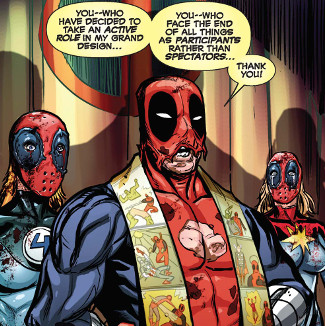 In one reality, Deadpool was committed to the Ravenscroft Institute by the X-Men for his insanity. The Microverse criminal Psycho-Man attempted to subvert Wilson's will to his own, but instead ended up creating a new voice in Deadpool's head. Deadpool decided he was fed up with being a comic book character who only existed for the entertainment of others, and decided to be the man who Kills the Marvel Universe. Through a series of death traps and plots, the unstoppable mercenary murdered Spider-Man, the Avengers, X-Men, Fantastic Four, and so many others.

Realizing he had to kill the comic book creators themselves, Deadpool entered the greater multiverse. He even traveled to the Ideaverse and killed famous literary heroic archetypes that inspired comic books. Finally, Deadpool began to consider the idea that, as a self-aware comic character, he may have been the true progenitor of the universe. Deadpool and his Evil Deadpool Corps began to kill ever incarnation of Wade Wilson or Deadpool they could find in the multiverse, until only Earth-616's Deadpool was left. Deadpool-616 instilled doubt in Deadpool's mission before killing him.

In one alternate universe, Wade Wilson developed superhuman intelligence after the regeneration experiments caused his grey matter to grow and replicate in order to counter a tumor. Adopting an eerily familiar suit of armor, he became the Overlord of Crime in New York City known as Death Mask. Wilson employed a number of henchmen with the "Death" motif, including versions of Hammerhead, Bullseye, Kingpin, MODOK and Bob. He even employed Victor von Doom as Deathwish, who had lost purpose in life after the disbanding of the Fantastic Four.

Deathwish was far more similar to Deadpool than Death Mask, and he became fast friends with the Deadpool of Earth-616 when that Wade Wilson crossed realities. When Death Mask killed Deathwish as a failed henchman, it drove Deadpool to seek revenge on his counterpart. He overthrew Death Mask's criminal empire and sent his doppelganger down to Mephisto's Hell. Death Mask was last seen battling the Infernal Hulk to claim his place at Mephisto's side.

25 years in the future, as seen in the Battle of the Atom crossover, Deadpool is a member of the rogue group known as the Brotherhood. Gathered by Mystique's children Raze and Charles 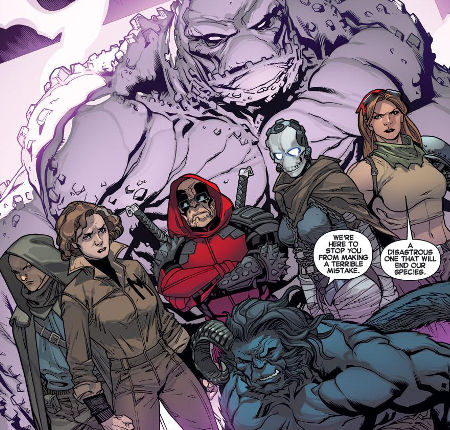 Xavier II, the Brotherhood were mostly puppets dancing on the strings of Xavier II's powerful telepathic abilities. Using Beast's knowledge of time travel, they made several strikes on the past, centered around the original five X-Men. Old Man Deadpool was killed on their first mission but, using the message in a bottle strategy, Xavier undid the losses of his team by sending a note to himself in the future not to go on that first mission. As a result, Deadpool was alive for subsequent attacks on the X-Men.

In the Final Execution saga, Deadpool's X-Force team reached the inevitable endpoint of proactively targeting threats. They became a pre-crimes police force using psychic and predictive models to stop murderers and other criminals before they ever actually committed a crime. Joined by the likes of Cable, Hope and Punisher, X-Force ran a fascist police state to ensure the safety of the population at any cost. Deadpool encountered his own past self when the present-day X-Force arrived in 2045, and Wade found himself as annoying as other people do.

Deadpool 2099 was a title fought over by Wade's two daughters, adult versions of Ellie Camacho 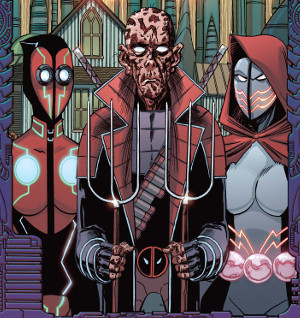 and Warda, his daughter with Shiklah. When Shiklah and the Monster underground finally turned on humanity, Deadpool was forced to end her threat with the forces of Earth's heroes. Years later as an adult, Warda captured her father and tortured him to learn what her mother's final fate was. Wade was eventually freed by Ellie and a digital copy of Preston's consciousness, who joined forces against Warda and her army of Bobs. Wade finally downloaded Preston into Warda's body, causing her to serve as a "conscience transplant" to help improve Warda's behavior, as Preston once did for him. In private afterwards, Wade confessed to Ellie that Shiklah was always close to his heart. She was entombed back in her glass sarcophagus and shrunk to microscopic size by Pym Particles, implanted inside his chest where he could protect her always.

Spilling out of the Inhumans v. X-Men war, Deadpool's teammate on the Mercs for Money, Negasonic Teenage Warhead, used her powers to eliminate the Terrigen Mists entirely. The Inhumans considered this blasphemy, however, and it only escalated the conflict between the two races. Deadpool's daughter Ellie was one of the mutant casualties in the war. Magik opened a portal into Limbo over New York before being killed, turning all of Manhattan into Limbo-Town five years later. Deadpool and the Mercs continued fighting in-between the two factions, trying to hunt down Negasonic. Wade finally reached her and convinced Ellie to reverse the changes she made just as he died fighting Lash. Negasonic traveled back in time and stopped herself from destroying the cloud, undoing this entire timeline. 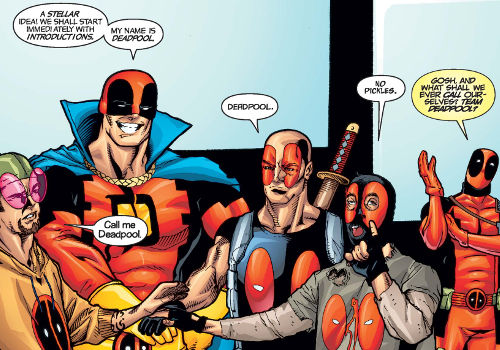 Deadpool has produced several clones and doppelgangers over the years. "Widdle Wade" was a pint-sized clone created by the Yakuza out of a blood sample Wade left behind at a battle site. Evil Deadpool was the "Ship of Theseus" parable given form. An insane fan collected Wade's leftover body parts from various fights, when they were brought together, these pieces regenerated together into an insane and amoral copy of Deadpool, dedicated to evil. Finally, a mystical talisman wielded by T-Ray caused aspects of Deadpool's personality to split off and form independent beings, collectively becoming Team Deadpool. These included the hero, the comedian, the killer and the maniac sides of his mind.