(Click on each image to see a larger version) 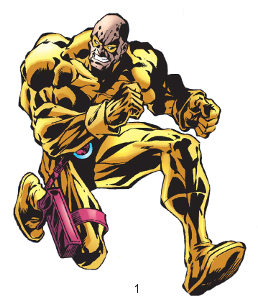 1) Deadpool's first attempt at a costume was a training uniform providing by the Wingless Wizard to the trainee members of his new Frightful Four. This suit was a basic yellow body stocking with a belt, hip holster, and yellow domino mask. [Deadpool (2nd series) #35]

2) Deadpool's classic uniform and tactical gear was predominantly red with black as a secondary color. The black portion is found on the sides of his body, extending up from his thighs, rising up the sides of his chest, and ending at his shoulders. The central red portion of his suit has angled cuts and strips taken out of it on top of the black segments. His mask is an all-covering red hood with black raccoon-like circles around his eyes. He wore a bandolier of pouches around his hip, and a multi-pouched utility belt. The entire costume is in no way derivative of Spider-Man or Deathstroke the Terminator, so quit asking. [New Mutants 1st series) #98] (X-Force #1, CableGrams) 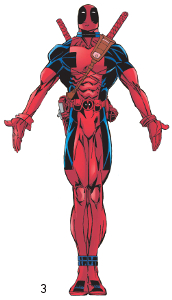 3) Deadpool's costume underwent minor revisions going into his first ongoing series. The central red portion was simplified into a straight vertical segment, as opposed to the angled hourglass previously seen. There were also fewer cuts or interruptions in the design, with only a single square cut into it from either side. His mask was essentially the same, but the eyes became larger and more animated to better display his expression. The Deadpool symbol was also added to his utility belt. [Deadpool (2nd series) #1]

4) After his costume was destroyed, Wade went back to his original tailor, who had lost the pattern for the suit. The revamped costume was therefore slightly different, with an even thinner red stripe down the center and red ridged pipeing on his shoulders and highlighting other areas of the costume. He also wore his utility belt less often with this design. [Deadpool (2nd series) #39] 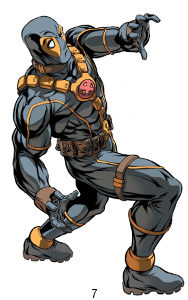 5) While working for the Director's Weapon X Program, Wade adopted an inverted version of his mask with red raccoon eyes on a black hood. The rest of the suit was basic black with red trim on the outside of his legs and down the front of his boots. Because the program cured his skin condition, Wade also wore short sleeves to show off his scarless pecs. [Deadpool (2nd series) #58]

--) Following his escape from the Weapon X Program, dying, and being resurrected, Deadpool went back to his traditional costume.

6) After recovering from his ordeal with the Black Swan, Deadpool wore a slight variation of his traditional costume. The suit itself was virtually the same, but he wore an enlarged circular clasp on the front, holding together his belt, bandoliers, and back-sheaths for his swords. [Cable & Deadpool #1]

7) As a joke, Beast and Wolverine dressed Deadpool in an X-Men uniform. Little did they realize this would kick off his obsession with being named a member of the team. The costume flipped his color scheme to orange and black instead of black and red. His chest clasp was rendered in orange and given an 'X' symbol in the center. [Cable & Deadpool #8] 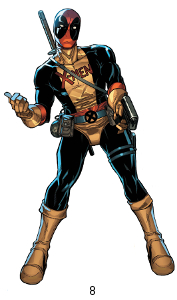 8) In his second attempt at an X-Men uniform, Deadpool largely copied the traditional yellow and blue X-Men training costume. He stitched "X-Men" across the front, while putting his name "Deadpool" across the back. Wade also wore his standard-colored mask. [Deadpool (3rd series) #16]

9) Deadpool's X-Force costume took his standard uniform and crossed it with the team color scheme of gray and black. The red portion of his uniform was replaced with gray. He was also allowed to wear an 'X' badge on his upper chest. [Wolverine: Road to Hell #1] 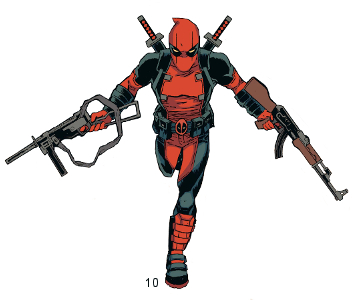 10) Deadpool's next upgrade to his classic suit was relatively subtle. The central red portion was now a smooth, uninterrupted stripe, adorned with several small clasps. The leggings were now predominantly black instead of red, with red shin-guards on his boots. The black spots on his eyes were also smaller and more stylized at times than the huge circles seen on previous costumes. [Deadpool (4th series) #1] 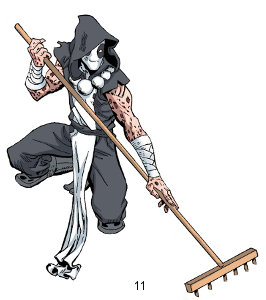 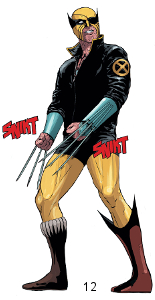 11) "Zenpool"  was the name given to the Inverted Deadpool during Axis, who found calm and inner peace instead of violence and chaos in his soul. Dressed like a Buddhist monk, Wade wore a white and black version of his mask with a hood, short-sleeved tunic, sash, and a beaded necklace. [Deadpool (4th series) #36]